Subscribe
Home / National / And the World Food Prize goes to… 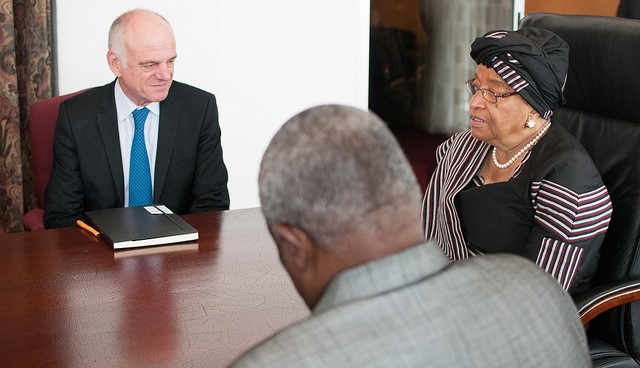 The World Food Prize was created by Nobel Peace Prize laureate Norman Borlaug in 1986 to recognize scientists and others who have improved the quality and availability of food. Above: Dr. David Nabarro (left) meets with President of Liberia Ellen Johnson Sirleaf. (UNMEER, Flickr/Creative Commons)

DES MOINES, Iowa (AP) — The World Food Prize will be awarded this year to two men who have dedicated their careers to improving the availability of nutritious food for pregnant women and children in an effort to reduce the effects of malnutrition in developing countries.

Lawrence Haddad, who is a British economist and food policy researcher, and Dr. David Nabarro, who has worked with the World Health Organization and United Nations on health and hunger issues, were named the 2018 prize recipients in a ceremony Monday at the U.S. Department of Agriculture in Washington.

The World Food Prize was created by Nobel Peace Prize laureate Norman Borlaug in 1986 to recognize scientists and others who have improved the quality and availability of food.

Haddad and Nabarro were recognized for their work to improve nutrition for mothers and children from pregnancy to a child’s second birthday — the most critical time for proper nutrition in a child’s development. Their leadership and advocacy is credited with helping to reduce the world’s number of children stunted from malnourishment between 2012 and 2017.

“There are 10 million fewer children who are physically and mentally stunted as a result of under-nutrition,” said Kenneth Quinn, World Food Prize president.

Haddad lives in England and is executive director of the Global Alliance for Improved Nutrition, a Swiss-based nonprofit launched at the United Nations to tackle the human suffering caused by malnutrition.

He is credited with using economic and medical research to persuade development leaders to make child nutrition a priority.

Haddad said improving nutrition of citizens in many developing countries was seen as a nice outcome of a nation’s economic improvement a decade ago, but through combining science, politics and communication, he managed to show leaders that improved nutrition can drive development.

“We really forged something that was compelling and hard to ignore. We said if you ignore nutrition, you’re ignoring development,” he said. “Kids entering the labor force malnourished will not do as well in school or in the labor market, they will not be entrepreneurial and you will not get this industrial transformation.”

Nabarro retired from the United Nations a year ago and is now a professor at the Institute of Global Health Innovation at London’s Imperial College. He is also setting up 4SD, a social enterprise in Switzerland focused on mentoring the next generation of leaders in global sustainable development.

His work over 17 years at the UN fluctuated between focusing on expanding nutrition programs to underdeveloped countries and tacking health crises including outbreaks of malaria, bird flu, Ebola and other diseases.

Through UN organizations — including the High Level Task Force on Global Food Security and the Scaling Up Nutrition Movement — he pulled together representatives from the UN, government agencies, donor groups and nongovernment organizations to help impress upon leaders in developing countries that children malnourished from the start suffer permanent damage that reduces their ability to reach their best potential, he said.

“Political leaders all over the world picked up on it and found that investing in early child development and early nutrition is a great investment in their national future,” Nabarro said.

He said he applied lessons learned in Nepal, India, Iraq and Africa.

“The wisdom is there in the community that was where hundreds of years of experience of dealing with challenges resided,” he said. “People were very generous and taught me just because you’re young and come from so-called advanced country, you don’t have all the answers.”

The foundation that awards the $250,000 World Food Prize is based in Des Moines, Iowa. Haddad and Nabarro will receive the prize at an Oct. 18 award ceremony at the Iowa Capitol.