Home » And the Golden Beet goes too… 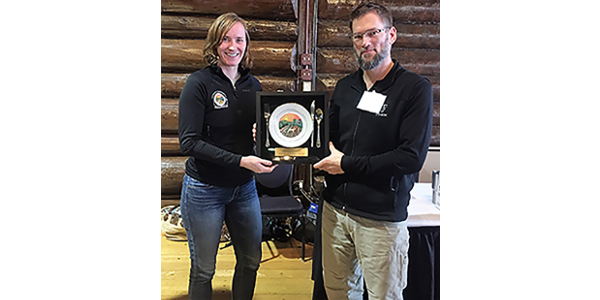 According to the Illinois Stewardship Alliance, “The Golden Beet Awards, now in their 6th year, are awarded by the Alliance to highlight progressive local food practices and recognize the people who are pushing the local food movement forward in Illinois.” They mention that the award recipients are innovative farmers and working to build sustainable local food and farm systems.

“Illinois is well-known for its corn and soybean production, but what people often don’t realize is that there is a vibrant and growing local food scene here in Illinois,” says Molly Gleason, Illinois Stewardship Alliance Communications Director.

Bill’s work is summed up by the Alliance as Scaling Up: Bill Davison of the Grand Prairie Grain Guild:

Bill Davison has been with Extension since 2013 as a Local Food Systems Educator. In his first three years, he has developed and delivered impactful and relevant programs that are helping to create viable local food systems in Illinois. His work has primarily focused on helping farmers adapt conventional farming practices to a sustainable model that both meets growing consumer demand for more healthful food and generates more on-farm income that can keep the next generation on the farm. His largest program in this area is the Grand Prairie Grain Guild (GPGG). Started by Bill in 2014, the guild is a network of farmers, millers, chefs, bakers, and consumers interested in creating and expanding markets for organic grains. The Grain Guild recently harvested 42,000 bushels of organic, food-grade grain to be milled and sold into the Chicago market. In addition, the Guild was instrumental in initiating the building of a new flour mill by a farmer in north-central Illinois and connecting chefs, bakers, and farmers who are now selling local flour into the Chicago area. Bill also helped the U of I Food Pilot Plant secure funding to upgrade their equipment so they can mill and process grains to be used in the dining hall.

In addition to the Grand Prairie Grain Guild, Bill has been active in connecting his community with local food production and consumption. In 2015 he spearheaded two projects, the Refuge Food Forest, a one-acre, organic food forest that is the first of its kind in a public park in Illinois, and the Normal Seed Library, which makes seed access more available and familiarizes the public with the act of saving seeds.

Bill says, “On average, every person in the Midwest could be fed by food grown within 13 miles of where they live. We have the ability to feed ourselves and doing so would address many of the most pressing challenges that we face today.”

“The Golden Beet Awards are our way of drawing attention to not only the hard-working farmers, but community volunteers, school teachers, chefs, bloggers, and many other passionate individuals from across the state who are finding unique ways to bring people together around local food,” says Gleason. “These individuals are building their communities through local food systems, and they deserve recognition for their efforts.”

Congrats, Bill. Keep up the great work! You can find out more information on this and more at go.illinois.edu/lmw.