Subscribe
Home / National / An update on the corn crop 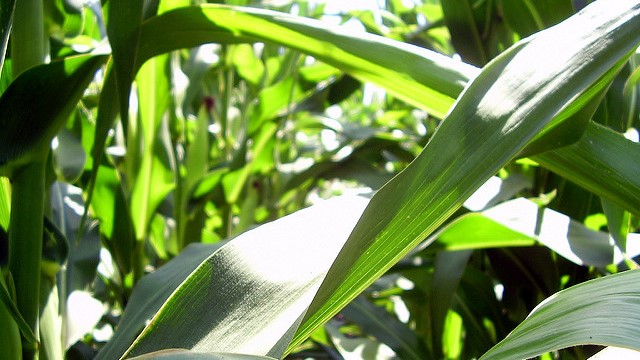 WASHINGTON — Corn planting in the 18 key US states has advanced another 5% to 97% complete as of June 3rd. Illinois and Missouri remain the only 2 states to have fully planted their 2018 corn crop, but 11 other states are at or above 95% complete. Pennsylvania, which has trended on the wet side in recent weeks, remains the furthest behind. In the state, three quarters of the corn crop is in the ground, and while there was a 16% advancement since the previous week, progress is still 13% behind the 5-year average. Of the planted corn, 86% has already emerged, leading last year’s pace by 2 points and the 5-year average by 3 points. Crops in good/excellent condition is down 1 point from last week, but still up from last year. As of June 3rd, 78% of the crop was in good or excellent condition, compared to 79% last week and 68% last year.

Through the weekend, precipitation across much of the Corn Belt is forecast to trend on the wetter than normal side. Rains are likely today, Thursday, in Nebraska, Iowa, and northern Kansas, with a possibility of severe weather. By Friday, the rain shifts a bit to the east, impacting parts of Iowa, Wisconsin, Michigan, Illinois and Indiana. Scattered showers are still possible, however, across the western and northern Corn Belt. To start the weekend, some rain is likely from Illinois to the coast with scattered rains still possible in the northern and central Plains. The Mid-Atlantic is currently expected to see a wet end to the weekend. Showers could also extend from Missouri into the Southeast to bring a wet end to the weekend as well. Next week is expected to trend wetter than normal for much of the eastern half of the country with several inches of rain for the week possible across portions of the Corn Belt and the Southeast. 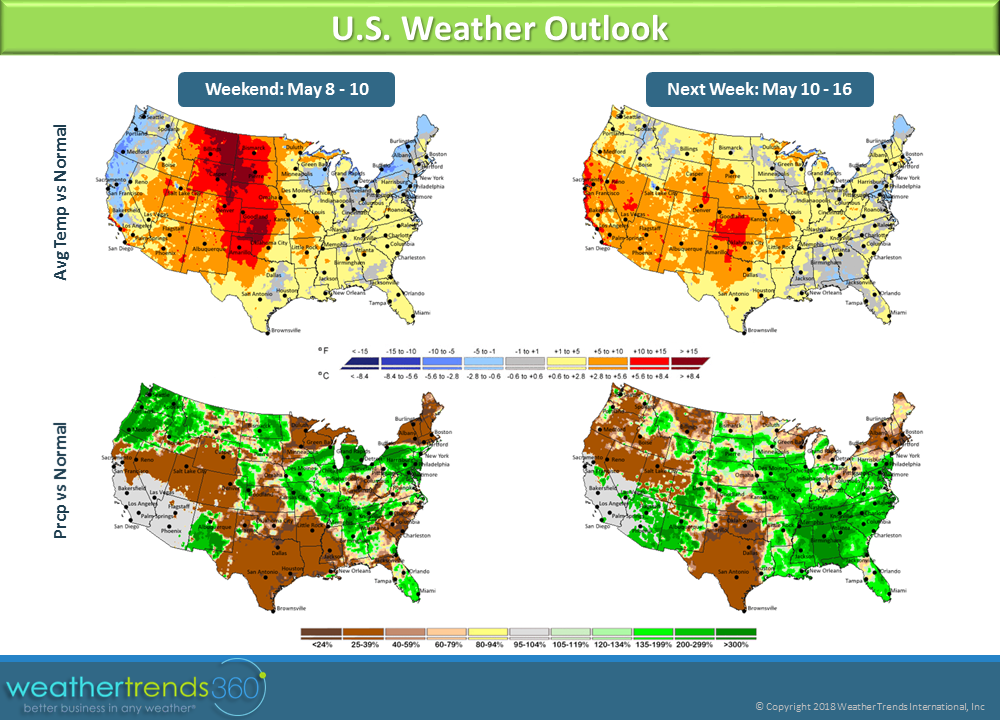 In Brazil, safrinha corn harvest is slowly beginning in states such as Mato Grosso. While it’s not uncommon for early harvest to begin in late May, a recent country-wide truck driver strike delayed fuel deliveries necessary for harvest equipment. As such, harvest in the state is just getting under way and is about 1% complete. While not a significant delay, harvest was nearly 3% complete at this time last year. The earliest planted fields are expected to produce the highest yields this year as those crops benefitted from ample rains and favorable soil moisture. Fields planted later, especially those planted after the close of the ideal planting window, are projected to see lower yields as dry weather impacted the health of the crops. Yields are also expected to vary across the state. Central and Western Mato Grosso received more favorable weather this season, while the eastern part of the state trended a bit drier.

Early safrinha corn harvest is also beginning in states like Parana. Similar to Mato Grosso, only about 1% of the crop has been harvested thus far. With harvest just barely beginning, and very few, if any, early yields reported, estimates for safrinha corn production are already being revised downwards. Much of this downward projection is due to the dry weather that impacted crops across southern Brazil this season. The safrinha corn crop was initially expected to be less than last year, but it seems as though the gap compared to last year could be larger than originally anticipated. While Conab, Brazil’s crop agency, won’t release their updated production estimate until next week, other analysts are projecting output to be somewhere between 48.7 and 55.3 million tons. Conab’s May estimate pegged production to reach 62.9 million tons.