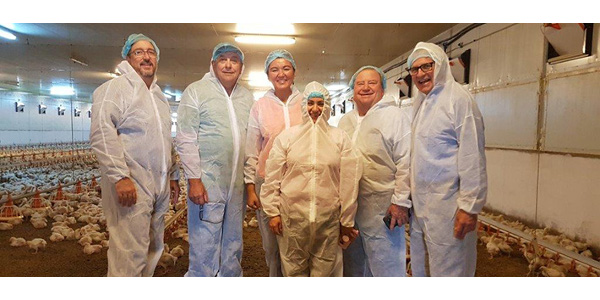 Tom Slunecka (far left) and Jim Willers (second in from the left) visited a poultry farm during their visit to Romania. (Courtesy of Minnesota Soybean)

“It was a very informative experience,” said MSR&PC Director Jim Willers, who attended the conference. “The European food industries are following the lead of the United States by resisting the use of trans fat. High oleic has zero grams of trans fat and has 20 percent less saturated fat than commodity soybean oil, so we definitely see an opening for potential for high oleic in the European market.”

The conference was attended by more than 150 food oil experts from across the European Union, focusing on the health benefits of high oleic oil and its availability.

Willers was accompanied by Minnesota Soybean CEO Tom Slunecka and USB Chair John Motter. During their week-long visit, they also visited a poultry farm and a Smithfield Foods processing plant.

“The Minnesota soybean checkoff invested in attending this conference to ensure the global market has access to Minnesota soybean farmers,” Willers said. “By that measure alone, this was a successful venture. After perhaps underestimating our capabilities initially, I think the European markets are beginning to realize high oleic’s potential.”

“Our number one goal was to make connections and find potential customers for Minnesota-grown high oleic soybean oil,” Slunecka said. “The interest was definitely there.”

More than 30,000 acres of high oleic soybeans are being grown in Minnesota in 2017, and about 625,00 acres are projected to be planted nationwide this year.

“The market demand for United States soybean is only going to continue to grow,” Willers says. “This conference was a step in the right direction.”