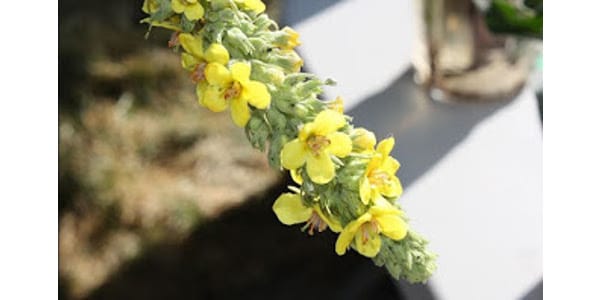 GOLDEN, Colo. — My first experience with mullein (Verbascum thapsus) was in my yard in Michigan. My wife and I thought it was a beautiful weed growing in our garden. We were concerned and tried to eradicate it without much success, but eventually decided it would be an addition to our garden if we were able to have some control over it. While not able to kill it, we were able to control one certain area and enjoyed it over time.

We thought we were through with common mullein when we moved to Colorado, and of course we were wrong. It grows even stronger and with more vigor here.

Mullein is an easy-to-grow plant, often seen growing in fields and ditches. Because of its ease to grow and spread uncontrollably it is considered an invasive weed in many states, including Colorado.

Common mullein (V. thapsus) does however, have a rich history as an herbal remedy, and has some scientific justification as a medicinal herb.

When it is grown as an herbal remedy, every part of the mullein plant is usable at different times during its life cycle. The thick, soft leaves are made into a tea to treat respiratory problems by loosening congestion and helping clear the lungs. The tiny hairs on the leaves can be irritating, and any teas should be filtered carefully to avoid this problem. A tincture (or an extract) of mullein alleviates this problem.

In addition, mullein flowers can provide a soothing and cleansing effect on the skin. Use mullein as a wash or balm for minor skin wounds or disorders by infusing flowers in olive oil and adding beeswax to make a balm. When looking for wild mullein, only harvest from straight, vigorous stalks that have not been treated with herbicide.

Although mullein is considered an invasive weed in Colorado, there are several varieties (around 300) that are grown as ornamentals in home landscapes that are not as invasive as the common mullein. They are a great addition to your garden landscaping. The flower stalks near my home at 8,000 feet grow up to 6 feet high, and the leaves grow as big as 2 feet across.

If you want to grow them, do so in an area where bees can enjoy the flowers, and birds can enjoy the seeds. Deer and elk eat the stalks and dead flowers around my house in the winter.

A note on the weedy, common mullein:

Common mullein is a biennial weed which reproduces by seed only. Plants first emerge as fuzzy rosettes in fall or spring, then bolt the second year, sending a single thick stem 2-6 feet tall. Yellow flowers turn brown as seeds mature in late summer. Seeds can be viable for 80 years. If you do not want to be over-run with mullein, remove the rosettes quickly.