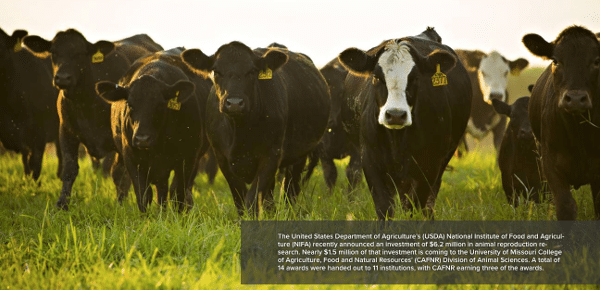 The United States Department of Agriculture’s (USDA) National Institute of Food and Agriculture (NIFA) recently announced an investment of $6.2 million in animal reproduction research. Nearly $1.5 million of that investment is coming to the University of Missouri College of Agriculture, Food and Natural Resources’ (CAFNR) Division of Animal Sciences. A total of 14 awards were handed out to 11 institutions, with CAFNR earning three of the awards. (Courtesy of University of Missouri College of Agriculture, Food & Natural Resources)

COLUMBIA, Mo. — The United States Department of Agriculture’s (USDA) National Institute of Food and Agriculture (NIFA) recently announced an investment of $6.2 million in animal reproduction research. Nearly $1.5 million of that investment is coming to the University of Missouri College of Agriculture, Food and Natural Resources’ (CAFNR) Division of Animal Sciences. A total of 14 awards were handed out to 11 institutions, with CAFNR earning three of the awards.

“This is an incredible achievement and showcases how strong our Division of Animal Sciences continues to be,” said Shibu Jose, associate dean in the CAFNR Office of Research. “We’re proud of each researcher who is playing a role in these three projects. This is an exciting announcement for CAFNR.”

The grants are part of NIFA’s Agriculture and Food Research Initiative, and are focused on leading to better strategies for animal production systems by enhancing reproductive management.

As part of the funding, Jared Decker, associate professor in the Division of Animal Sciences and state beef Extension specialist, earned a $500,000 grant to research the genomics of puberty and fertility in heifers. Peter Sutovsky, professor in animal sciences, and Kevin Wells, associate professor in animal sciences, were awarded $490,000 to study the influence of autophagy and mitophagy on preimplantation embryo development and mitochondrial inheritance in livestock animals. Finally, a trio of Division of Animal Sciences researchers, including Bethany Redel, research scientist; Randy Prather, Curators’ Distinguished Professor; and R. Michael Roberts, Chancellor’s Professor; earned $465,000 to look into cytokine enhancement of in-vitro maturation and developmental competence of swine and cattle oocytes for use in agriculture and biotechnology.

“This is a major accomplishment for the Division of Animal Sciences,” said Bill Lamberson, division director. “We’re excited to see what our researchers will be able to achieve with these awards.”

The goal of Decker’s project is to identify the genes and DNA markers that regulate puberty and fertility in heifers to create DNA tests. Fertility is the key driver of profitability in the beef industry, which is an economically important market. However, there are not accurate tools available to select heifers that are more fertile.

“The long-term goal of our research is to understand genetic influences on reproductive efficiency,” Decker said. “The goal of this project is to identify the genes and alleles regulating puberty, fertility and both traits in beef heifers, and to utilize these genetic effects to accurately predict genetic merit for these traits. This will minimize losses due to pre-pubertal and infertile heifers and cows.”

Decker said the project has four primary objectives. The first is to estimate the amount of variation in measured traits influenced by different genetic effects. Decker will also measure the amount of variation due to genetics shared between traits. The second objective is to identify DNA markers that influence puberty and fertility from extensive analyses of data from individual breeds. Decker’s third objective is to combine information across breeds, traits and datasets to identify genes, gene networks, and variants that influence puberty and fertility.

“Our final objective is focusing on the knowledge we will learn in the second and third objectives,” Decker said. “We expect that we will better understand which genes control differences in puberty and fertility. Beef farmers and ranchers will have new DNA tests to select more fertile heifers, which will increase beef sustainability.”

Decker added that he is actively recruiting 2,500 Red Angus and 2,500 Hereford heifers to the project. Visit his blog, A Steak in Genomics, for more information.

Sutovsky’s project includes the hypothesis that the degradation of paternal mitochondria at fertilization is mediated by the ubiquitin proteasome system (UPS) through autophagy and proteasomal proteolysis. Autophagy is the body’s way of clearing itself of damaged cells to make way for healthier cells.

“Based on our newest data, we now also hypothesize that the contingent of mitophagy determinants of spermatozoa is reflective of sperm mitochondrial structure and function, and, by extension, of individual males’ sperm quality and fertility,” Sutovsky said.

Sutovsky said the project includes two independent objectives tied together by their knowledge of UPS. The first objective is to decipher the regulation of post-fertilization sperm mitophagy in porcine zygote and reproduce it in a porcine cell free system. Mitophagy is the selective degradation of mitochondria by autophagy. The second objective is to establish the relationship between the sperm contingent of mitophagy determinants and male fertility.

Both objectives include two experiments. Under the first objective, experiments are designed to discover and validate key molecules regulating sperm mitophagy in the in-vitro fertilized oocytes. Experiments under the second objective are designed to correlate the aggresome-based morphometry of sperm tail mitochondrial sheath and extramitochondrial aggresomes with boar fertility in single sire AI service. Aggresome refers to a cluster of misfolded proteins in the cell. Morphometry refers to the shape and dimensions of living organisms.

Increasing the Production of Competent Embryos

In pigs, the production of embryos using oocytes matured in a petri dish has assumed an increasing importance for agricultural applications. For example, immature oocytes matured in a petri dish were used to produce pigs that are resistant to the porcine reproductive and respiratory syndrome (PRRS). Once these animals are permitted to enter the food chain, they could save North American pork producers more than $600 million annually. However, immature oocytes are not great at producing embryos.

“Our hypothesis is that by adding fibroblast growth factor (FGF), leukemia inhibitory factor (LIF) and insulin-like growth factor 1 (IGF1) – acronym FLI – to the medium that the oocytes are matured in will greatly increase the production of competent embryos,” Redel said.

The project includes three primary objectives. The first is centered on identifying the means that FLI in combination leads to improved oocyte maturation. The second objective is to distinguish the genes and gene pathways of the surrounding supporting cells of oocytes from ones unlikely to lead to a viable pregnancy, and further improve overall oocyte quality and competence, embryo development and reproductive efficiency of pigs. The final objective is to demonstrate that FLI maturation of oocytes provides a means of reducing the number of embryos transferred to a surrogate while achieving a normal litter size.

“We expect to identify markers that allow for identification of the best oocytes for producing pregnancies and piglets,” Redel said. “Our expectations from this research are to bridge the gap of knowledge on oocyte maturation in a laboratory setting and a way to more efficiently produce viable pregnancies in pigs.”

Decker, Sutovsky and Redel are three of 22 researchers in the Division of Animal Sciences who lead federally funded projects.