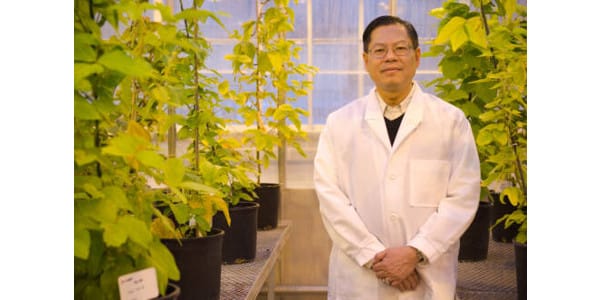 Henry Nguyen, Curators’ Distinguished Professor of Plant Sciences in the University of Missouri College of Agriculture, Food and Natural Resources (CAFNR), is part of a group that recently compared the three most recent reference genome accessions, which includes an improved “Williams 82” assembly, and new assemblies of “Lee” and PI 483463. (Courtesy of University of Missouri)

COLUMBIA, Mo. — It was nearly a decade ago when the first soybean reference genome, “Williams 82,” was published in 2010. For the next several years, that cultivar, which was chosen to represent the northern United States germplasm, served as the main soybean reference genome – the sequence that gives scientists a baseline of a species’ set of genes.

A few years after “Williams 82” became available, Henry Nguyen, Curators’ Distinguished Professor of Plant Sciences in the University of Missouri College of Agriculture, Food and Natural Resources (CAFNR), was part of a team that developed additional reference genomes, this time focusing on soybeans grown in the southern U.S., as well as a wild ancestor of soybean. These two reference genomes are soybean cultivar “Lee” and wild type PI 483463 – giving researchers three soybean reference genomes to work with.

Nguyen is part of a group that recently compared the three most recent reference genome accessions, which includes an improved “Williams 82” assembly, and new assemblies of “Lee” and PI 483463.

“It’s vital to have more than one reference genome,” Nguyen said. “When you make these types of comparisons across different models, you start to get more accurate information. While the basic genome across these three reference genomes is very similar, it’s important to map the differences. Those small changes have a big impact.”

Having a map of soybean genes is key for breeders who work to develop varieties that farmers can use to help battle diseases and other environmental factors. The soybean is an extremely important crop on a worldwide level as well. Approximately 340 million metric tons of soybeans were produced globally in 2018, with the market for soybeans worth $40 billion each year in the U.S. alone.

Soybeans are extremely common in the Midwest. The crop is grown as far north as Minnesota and North Dakota and as far south as Georgia and Florida. That wide range of growing area also means soybeans face a variety of challenges. Different pests and climates affect the soybeans in each region.

“The large range of growing conditions really gave us a direct reason to develop more reference genomes,” Nguyen said. “Soybeans in Minnesota have to handle a much different environment than soybeans in Georgia. Naturally, that means they are built differently. That means having multiple reference genomes is a must.

“Comparing those genome accessions is also an important part of the process. It shows us where the genomes differ – and possibly where we can find answers to what traits or genes we need to understand better to build stronger soybean varieties.”

“Nothing is ever final when it comes to this type of work, but we do continue to improve on what we’ve done,” Nguyen said. “This is another exciting step in the process.”

Funding for the sequencing project was provided by the United Soybean Board. Investigators on the project include: Nguyen and Babu Valliyodan (University of Missouri); Steve Cannon (USDA-ARS); Jeremey Schmutz (HudsonAlpha Institute for Biotechnology); Rajeev Varshney (Center of Excellence in Genomics and Systems Biology, International Crops Research Institute for the Semi‐Arid Tropics); Ting-Fung Chan and Hon-Ming Lam (The Chinese University of Hong Kong); Scott Jackson (University of Georgia); and Dave Edwards (University of Western Australia).

Along with being a Curators’ Distinguished Professor, Nguyen is part of the Interdisciplinary Plant Group (IPG) at the University of Missouri. The IPG is one of CAFNR’s Programs of Distinction, a select collection of programs that exemplify CAFNR’s drive to distinction. Those programs define CAFNR’s current impact on Missouri’s agriculture and natural resource economies, providing understanding for how CAFNR is addressing challenges facing Missouri agriculture and natural resources.

All hay is not created equal