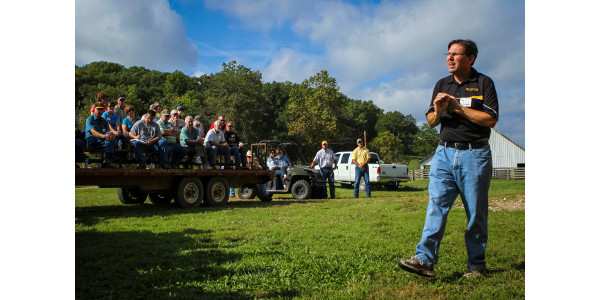 Rob Kallenbach has been named associate dean of CAFNR Extension/senior program director of Agriculture and Environment Extension. (Courtesy of University of Missouri Extension)

COLUMBIA, Mo. — It was more than 20 years ago when Rob Kallenbach joined the University of Missouri as an assistant professor and state extension specialist in forage crops. Kallenbach served farmers and producers across the state, educating, answering questions and building relationships.

With more experience, Kallenbach gained more responsibility, which in turn led to more leadership opportunities. Those opportunities led to new positions, and, last year, he was named the interim associate dean/senior program director of Agriculture and Environment Extension in the College of Agriculture, Food and Natural Resources (CAFNR) at MU.

The interim tag has now been officially removed. Kallenbach’s appointment as associate dean of CAFNR Extension/senior program director of Agriculture and Environment Extension is effective immediately.

“I love saying that ‘Extension is the University of Missouri’s most exciting mission,’” Kallenbach said. “It’s exciting because you get to see where science serves people, fulfilling our land-grant birthright.

“One of the pieces of advice that [CAFNR Vice Chancellor and] Dean [Christopher] Daubert gave me when my interim role began was to ‘just lead.’ He told me not to focus on the interim title, he just wanted me to lead. I’m lucky to have a great group of people to lead.”

Kallenbach said MU is home to around 120 specialists, either on campus or out in the state, who have responsibilities in Agriculture and Environment Extension.

“Our faculty do a great job translating the value of what happens in a petri dish on campus, to what it means for a farm in Atchison County,” Kallenbach said. “That only happens if we have a good relationships and collaborations with researchers and faculty on campus, as well as producers. That feedback runs the other direction, too. Our willingness to listen and collaborate with partners is key.”

Kallenbach said he has conducted surveys to see what is working and what challenges extension specialists face. He said those surveys returned encouraging results.

“Overall, our specialists will tell you they love their jobs. If you ask why, they will tell you it is because they get to make a difference with people they know,” Kallenbach said. “We take our role of doubling the value of agriculture in Missouri by 2030, while sustaining our natural resources, seriously. It’s a bold goal and yet, I’ve been really pleased with how our faculty have looked creatively at accomplishing that goal.”

Throughout his career at Mizzou, Kallenbach has received several honors, including the National Excellence in Extension award given by the National Institute of Food and Agriculture (NIFA), recognizing him as the top extension educator in the nation. He was named the assistant dean for Agriculture and Natural Resources Extension at MU in 2015. As assistant dean, he has led the development, implementation and evaluation of MU Extension programs in agriculture and natural resources, statewide.

“Dr. Kallenbach has served Missourians well throughout his career, and he has worked hard to strengthen the important partnership between CAFNR and MU Extension,” Daubert said. “His dedication to this collaboration is critical for our programs throughout the college and across Missouri. We’re so excited to have him leading the charge for CAFNR’s extension efforts.”

Kallenbach received his bachelor’s degree from Southwest Missouri State University in agronomy. His master’s degree and Ph.D. were both in agronomy as well, coming from MU and Texas Tech University, respectively. Kallenbach worked as a field crops adviser in Cooperative Extension at the University of California for three years before joining MU.

“Dr. Kallenbach’s knowledge, leadership and collaborative skills make him an excellent choice for this position,” said Marshall Stewart, MU vice chancellor for extension and engagement. “I have great confidence in his ability to serve and benefit the people of Missouri.”

Dairy was local before local was cool