Subscribe
Home / Kentucky / An emergent pest in the Midwest 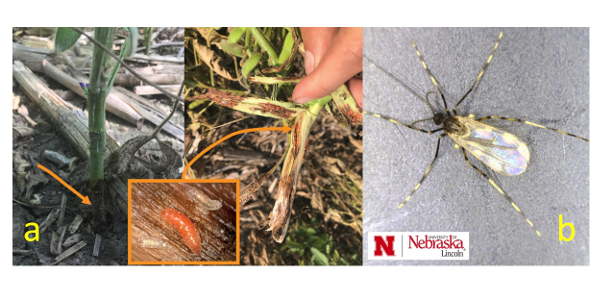 Figure 3. Darkened area at the base of a soybean plant (a) associated with soybean gall midge. Peeling back outer layer reveals large numbers of soybean gall midge larvae. In the orange border rectangle (inset) two earlier stages of soybean larvae appear white in color until 3rd instar when it turns to an orange color; and (b) Adult midge, approximately ¼ inch in length with an orange abdomen (not visible under the wings). A key characteristic is the black and white banding on its legs. (Photos: Justin McMechan)

LEXINGTON, Ky. — In November 2018, a new pest of soybeans was identified as Resseliella maxima (Diptera: Cecidomyiidae) by Raymond Gagné and Junichi Yukawa, two leading taxonomists on midges from the USA and Japan, respectively. This is a new species that farmers noticed by late June of 2018 in the edges of soybean fields in Iowa, Nebraska, Minnesota, and South Dakota. By the end of the year there were 66 counties in these states where this insect was reported in soybean fields. This year the soybean gall midge was reported in one northern county in Missouri (Figure 1).

Justin McMechan (Crop Protection and Cropping Systems Specialist) at the Univesity of Nebraska-Lincoln reported that this pest affects soybean plants at the edge of fields across eastern Nebraska. Affected soybean plants had dark discolorations near the soil surface (Figure 2) that extended up to the unifoliate node. The symptomatic plants easily snapped off near the soil surface and orange to white maggots were found feeding within the darkened area of the plant. These maggots were the orange gall midges; an insect previously dscribed in soybeans in Nebraska. Tom Hunt, Keith Jarvi and Bob Wright reported on the orange gall midge in an article in CropWatch in August 2011. In most cases, the events reported in 2011 were mostly associated with soybean plants that had some type of mechanical damage earlier in the season.

However in 2018 and 2019, infestations were much earlier than previous reports. In late June, infested soybean plants were already showing signs of necrosis and wilting with the greatest frequency of damaged plants occurring at the field edge. Last year, there were documented yield losses of up to 90% to 100% in those border plants, and yield loss averages reached up to 30% in some infested fields.

For information on the life cycle and description of this new emerging pest in soybeans, visit the links indicated below.

The soybean gall midge is an insect that it is difficult to manage due to its feeding behavior. The midge or larva is well protected by the stem (Figure 3a) and insecticides do not reach them. Also, adult flies (Figure 3b) have a prolonged emergence period, thus repeated applications of insecticides can be economically costly.

Cultural practices can be a tool that may be used by farmers. McMechan reported this year that late plantings of soybeans (late June) did not shown infestations compared to previous planting dates. He reported that maturity groups 1 and 2 showed visible signs of damage at or near the soil surface, whereas groups 3 and 4 showed signs of plant damage in the axils of the trifoliate approximately 6 to 8 inches from the soil surface.