Home » An apple galaxy close to you 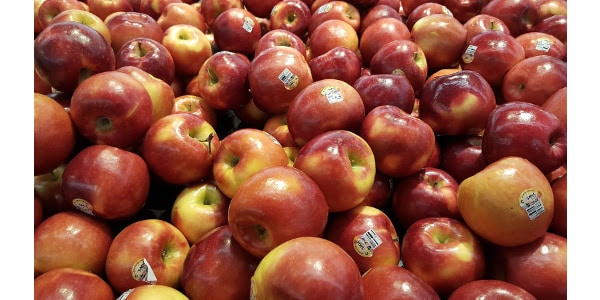 FORT COLLINS, Colo. — I think you can find out a lot about a person by looking at their phone’s news feed. For me, you’d learn that I read a lot of stories about baking, golf, Taylor Swift, college football, and backyard chickens. Recently I’ve been inundated with news stories about the hottest apple on the market: Cosmic Crisp.

A couple years ago, my dad sent my brother and me a story about this apple that was going to take over the world. Or at least a portion of the apple market. It was Cosmic Crisp, an introduction from Washington State University and has parents of Honeycrisp and Enterprise–and was first hybridized in 1997. One great attribute to Cosmic Crisp is that it doesn’t brown (oxidize) when exposed to air and is more resistant to bruising. Shelf live is several months.

My family loves apples–it was a staple in our gardens from my great grandparents to my dad. It was always a treat to buy a fresh apple in the horticulture building at the Minnesota State Fair. We’re also really proud of being Minnesotan and having Honeycrisp, SweeTango, and Zestar as University of Minnesota introductions.

Cosmic Crisp is a “game changer” and a “once in a generation event”. High praise for a fruit. It’s also been developed to replace Red Delicious–that mealy, bland apple that you see in school cafeterias. Now THAT is a big deal. My reliable news feed said it would also be hard find the apples this year, because they had a limited supply.

When I was in Oregon a couple weeks ago, I was at Safeway picking up a few things. And there it was. A bin of Cosmic Crisp. I actually yelped out loud. Then I did what any normal human would do–take a selfie by the apples.

I was super excited. Cosmic Crisp! The apple to replace Red Delicious! The apple that has Honeycrisp in its genes! Juicy, sweet, crisp! I couldn’t wait to try it.

And my first reaction was…underwhelmed. Maybe I was too excited. Maybe I was expecting more. Don’t get me wrong–it’s a good apple. But after years of anticipation, I was more “meh” than “WOW”. But that’s just me. My apple taste preference differs from yours. So I decided that a research taste test was necessary–with my co-workers at the Larimer County Extension Office. They were eager to help.

I bought three kinds of apples: Cosmic Crisp, Honeycrisp, and Red Delicious. They were cut and labeled with “A”, “B”, and “C”, so it was a blind taste test (people didn’t know what apple they were eating, nor did they know the varieties in the study). Participants had a score sheet and rated the apples based on appearance, crunch, flavor, and overall appleness. Rating was on a scale of 1-5, with 5 being excellent. I also asked the testers to write individual comments about each of the apples.

The results were interesting! In appearance, Honeycrisp took first place. People liked the look of the apple, calling it “beautiful” and a “great color”. Crunch was awarded to Cosmic Crisp, noting the apple had a “powerful, crisp flavor with a firm texture”. Flavor was a tie between Cosmic Crisp and Honeycrisp. Finally, overall appleness went to Cosmic Crisp, and one person commented, “it had the ideal apple flavor of tangy and crisp”; another said, “full taste that was tart and sweet”.

For what it’s worth, Red Delicious scored at the bottom of all categories. Poor Red Delicious. Its highest ranking was for appearance, as it’s your classic red apple, but taste was “watery” and “bland”. One participant stated that it was her children’s favorite apple, so it has a following.

Following the taste test, I revealed the apple varieties and shared some background information about the apples. I also talked about price. Cosmic Crisp was $2.99/pound; Red Delicious was 2 for $1; and Honeycrisp was on sale for $1.99/pound. While it wasn’t in the research, people did comment that price is a factor in their apple purchases.

Then I asked everyone to pick the apple they would most prefer to eat. It was a 50-50 split of Cosmic Crisp and Honeycrisp. And that’s when it came down to personal preference–some liked more sweet, some tart. The good news is that there’s an apple for everyone.

When I came to work today, my co-worker was enjoying an apple at her desk for breakfast. It was a Cosmic Crisp☺You can find them in Colorado at King Soopers and Sprouts. I’m sure Safeway and Whole Foods has some too. Try one for yourself and let me know what you think!