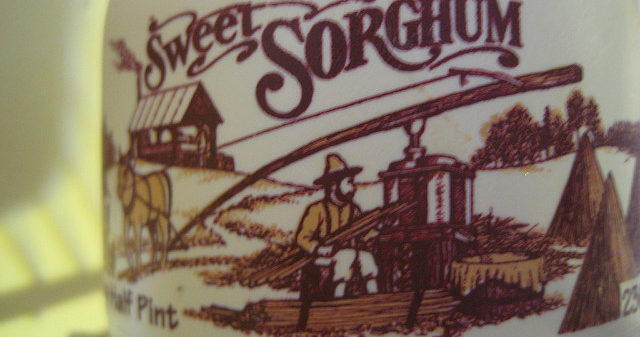 The tall cane could be mistaken for corn in the field, but after it’s crushed and the juice has boiled down all day, it tastes like savory caramel. (Eugene Peretz via Flickr)

(Editor’s Note: This story is part of a radio series called Growing Local that tells stories about local food and farms in the Southern Appalachians. The series is produced by ASAP and airs Monday mornings on WNCW.)

ASHEVILLE, N.C. — If you drive through the back roads of Madison County, North Carolina on an autumn morning, you might think you’ve traveled back in time. Today, there are still a few family farms, nestled in the hills and hollers, that use draft horses to help squeeze the juice from sorghum cane as neighbors gather ’round to watch it boil down to sweet sorghum syrup.

Cathy Guthrie of Doubletree Farm has been making the amber-colored syrup for 20 years. Her field of sorghum is the first thing you see when you drive up to the farm. The tall cane could be mistaken for corn in the field, but after it’s crushed and the juice has boiled down all day, it tastes like savory caramel. A growing number of chefs use sorghum to sweeten up sauces and desserts, and Southern Appalachian families have poured it on biscuits for generations.

Guthrie learned this traditional Appalachian skill from neighbors when she was farming in Tennessee. “As soon as you get into draft horses you get a lot of old timers telling you about all the old ways and all the traditions that went along with working horses,” she says.

To make sorghum molasses the old-fashioned way, a horse is harnessed to a wooden pole with chains that echo off the mountainsides as they jangle. The horse pulls a pole in a circle, which turns the gears of a roller mill, that squeezes the juice from the cane. The farmer feeds the cane into the mill, careful to duck each time the horse and pole pass by.

“The reason I’m using horses for this job right now is because it’s the technology that I have and it’s definitely a lot more pleasant than attaching a tractor to the pole. The horses are quiet, there’s no exhaust, they’re powered by the sun, you know,” Guthrie says. “So it feels good to use the horses.”

She is eager to teach new farmers how to make sorghum molasses, and Mollie Lebude and her husband Anthony have been waiting all year to learn. “So this is our first time ever doing it but we’re really enjoying it,” Lebude says. “I love the smell of the horses and the sounds of the chains and everything like that. It’s a lot of work though.”

Mollie and Anthony grew their own cane at Forest Creek Farm and Nursery in Saluda. Early this morning they hitched a trailer to their van, loaded up their cane and two young kids, and drove an hour North to spend the day making molasses. They’ll be here long past dark.

“I have never been through the whole process. Right now we’re just still milling it, and then I’ll see how it boils down and everything like that. I’m hoping it’s going to taste really good,” Lebude says.

Once the sorghum has been milled into juice, Guthrie pours it into a stainless steel tank where it’s cooked down all afternoon. A wood-fired furnace crackles below, and the heat evaporates the extra water, slowly turning 80 gallons of green juice into just eight gallons of dark molasses. Guthrie teaches Lebude how to use a wooden paddle to skim the plant matter off the top as it cooks down.

Guthrie remembers how she first learned years ago, before she got modern equipment to test things like sugar content. “We didn’t use any of the tools that we use now. We just used folk knowledge. They actually had to call a friend from Shelton Laurel and her name was Elowine Shelton and Elowine told us all about how to read the bubbles when you’re cooking it. Telling us we needed to look for the frog’s eyes, the tator hills, and the sheep’s eyes. The final stage, she would say is it bat winging? Is it bat winging?”

The sorghum won’t drip down the paddle like a bat with outstretched wings until after sunset. So we all sit back and wait. Neighbors and friends stop by all day, taking turns on a beat up guitar. Guthrie pulls out a jar of sorghum that’s already been boiled down. She shows the kids how to dip popsicle sticks into the sticky brown syrup, teaching them to love sorghum molasses just like she does.

“I feel like I’m kind of holding this tradition having learned it from these wonderful old timers who are no longer with us. They’ve all passed away. All the people that I learned from are gone. And so I feel a certain amount of responsibility toward that. And also, if you want to be into local food you need to know about sorghum,” says Guthrie.

Blueberry and grape workshop in February

Board of Agriculture will meet Nov. 16