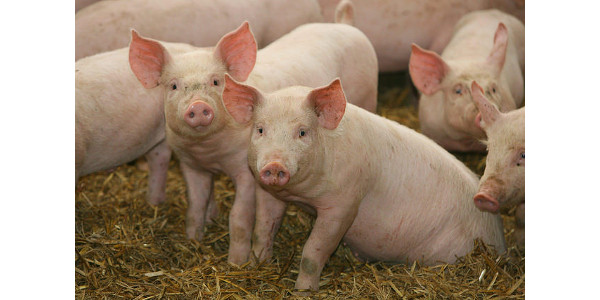 Kansas State University researchers recently completed a feeding study with 1,188 pigs in a commercial research barn, concluding that there are many options to help producers maintain profitability. (Courtesy of K-State Research and Extension)

MANHATTAN, Kan. — Researchers at Kansas State University have completed a large trial with pigs to determine the feeding options that are best for producer’s profitability.

The research showed that swine producers have a lot of ways to reach the same amount of profitability, depending on the cost of feed and the market value of finished pigs.

“When raising pigs, producers can have two goals, basically,” said Mariana Menegat, a K-State doctoral student in swine nutrition who led the research. “They may want to feed the lowest feed cost, or they may want to follow a program that gives them the best profitability.”

Menegat tested combinations of diets with 1,188 pigs in a commercial research barn. Over the course of 120 days, some pigs were fed lower-cost, lower amino acid diets, and others were fed a diet formulated with a higher-costing feed that included protein-rich amino acids.

The researchers also tested the profitability of feeding diets in two or four phases, meaning the number of different diets that a pig gets during the grow-finish stages. In the swine industry, it’s known as phase feeding.

Throughout a given year, Menegat added, producers could choose to change strategies when feed costs are lower, or when market prices for pigs are higher, for example.

“What it means is that the producer has some options,” said Mike Tokach, a university distinguished professor in the department of animal sciences and industry who oversaw Menegat’s work. “It comes back to what their personal endpoint and their personal goals are. If they really want maximum performance, they want to feed a little more amino acids. This research provides us with some good numbers to use for calculating economic returns under different scenarios.”

Tokach noted that Kansas State University has routinely published recommendations for including amino acids in swine diets. One purpose of this study was to assess whether the university’s current recommendations are still appropriate.

In the United States, pigs are fed as many as six different diets during various stages of growth. Menegat initially tested two- and four-phase feeding, but thinks that testing finishing diets in three phases or even one phase could produce similar profitability for producers.

Feeding fewer diets to pigs could ultimately save money in other areas, she said, such as in transportation and other related costs.

Menegat will discuss this study at the 50th annual K-State Swine Day, which takes place on Thursday, Nov. 16 in Manhattan. For more information on this year’s event, visit www.asi.k-state.edu/events/swine-day.