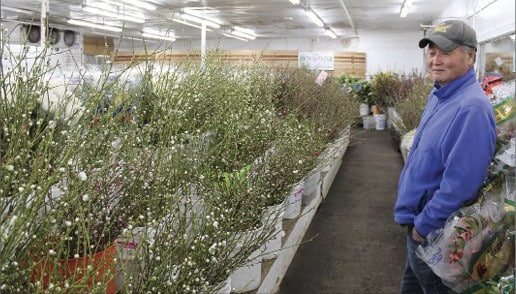 Allan Nishita, co-owner of Flora Fresh in Sacramento, looks over peach-blossom branches in one of his coolers. These branches would normally be used in decorative arrangements, but with events such as weddings being postponed or canceled because of the COVID-19 pandemic, sales have dropped and Nishita has been scrambling to keep his wholesale company’s doors open. (Kevin Hecteman, California Farm Bureau)

SACRAMENTO, Calif. — The COVID-19 pandemic has not been kind to California flower growers.

“Our sales are way down,” said Ivor Van Wingerden, who runs the Nipomo operations of Carpinteria-based flower grower Ocean Breeze. “We basically lost 90-95% of sales, and we’re starting to slowly move back up.”

His experience is typical, according to Dave Pruitt, chief executive of the California Cut Flower Commission.

“Many of my growers right now are functioning, or trying to function, with 15 to 20% of their business, max,” Pruitt said. “And that happened rapidly.”

Most retail florists have closed, and many events for which people would buy flowers have been postponed or canceled.

“That’s why I have so much product, because all the weddings were canceled,” Nishita said. “Any kind of major gathering or event was canceled.”

California accounts for 80% of domestic flower production, Pruitt said, but some of the state’s 120 growers face closure due to pandemic-related losses.

“I have one company that just told me they’ve closed permanently,” he said, “and I will get more.”

Flower grower Mike Mellano of Oceanside has suspended most operations.

“This crisis couldn’t have hit at a worse time,” Mellano said. “We were on a record pace for sales, and within about three or four days, we went from record pace to less than 10% of historical.”

Coupled with that was “a tremendous amount of unpredictability,” he said, which led him to suspend most business activities except for irrigation and pest control.

“A big percentage of our crop mix are perennials that will be alive and viable a month from now, two months from now,” Mellano said. “The challenging part of it is, a big part of it won’t be sold because the sales that we’re missing in this window are not recoverable.”

Annuals, he noted, “are going by the wayside every day.”

“A lot of those guys are event-based, and events are nonexistent,” he said.

It got to the point where Nishita considered closing up shop before he changed his mind and kept the doors open for those customers still shopping for flowers. He’s practicing social distancing at the workplace and wiping down common areas, and noted that employees still working want to be there.

“A lot of people thought people in the flower business aren’t essential, but we’re part of agriculture, and I believe we are essential,” Nishita said.

Van Wingerden said work in his greenhouse continues, although he’s had to reduce hours to cope with the slowdown in sales.

“I grow lilies, which we basically plant three and a half to four months ahead,” he said. “We have gerbera daisies, which is a perennial crop that lasts about three years in the greenhouse. You have to keep harvesting the crop, or else you have issues with the plant later. We still have work to do.”

He said he’s worried about what should be the highlight of the season.

“What is Mother’s Day going to look like?” Van Wingerden said. “Mother’s Day is our busiest holiday of the year, and we plant a lot.”

“The whole chain of distribution is breaking apart,” he said. “We can move product within California, and some of our growers are actually online providers, so they’re working with their online companies.”

Some farmers have online traffic, but rely more heavily on wholesale distribution to sell flowers; in addition, the major flower markets in San Francisco and Los Angeles have been forced to close because of local shelter-in-place orders, shutting off a major avenue of distribution.

Mellano said his business is monitoring markets and staying in touch with customers.

“As soon as we see some daylight, then we hope to start backfilling with staff and, on a limited basis, scale back up as the opportunities present themselves,” he said.

Van Wingerden said he’s looking at more direct-to-consumer sales; the pandemic has forced him and other growers to come up with new business models on the fly. The big unknown, he said, is how long this will last.

“We’re figuring stuff out,” Van Wingerden said. “We don’t have the answers. No one does.”

As a result, some farmers and wholesalers have resorted to giving the blooms away.

Van Wingerden said he found himself with 20,000 stems of gerbera daisies with nowhere to go, so he called a friend who works as an emergency-room doctor in Santa Maria.

“I brought a truck, and he knew a place we could park it,” Van Wingerden said. “He told all the nurses, ‘Hey, go over there after your shift and take as many gerberas as you want.’ That was great.”

He also left flowers on doorsteps near his Nipomo greenhouses, with notes.

“We prefer this to be in someone’s home than in the compost pile,” Van Wingerden said.

Nishita also cleared space in his coolers by holding a floral giveaway.

“We decided that, since it’s not going to move and it’s all beautiful product from California and around the world, that we’re just going to share the beauty,” Nishita said. “Hopefully, our customers will come here and pass it along, because these are dark, dreary times, and that’s one thing that we provide in this industry, is emotion and beauty and joy and a good feeling.”

The California Cut Flower Commission maintains a list of flower farms open and shipping to wholesalers and retailers at ccfc.org.

“Step to success” with the NJAA