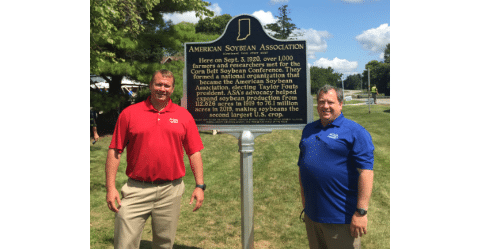 ST. LOUIS, Mo. — The American Soybean Association (ASA) has returned to its roots to celebrate a century of coordinated efforts and ensuing successes on behalf of U.S. soybean growers. With support from the Indiana Soybean Alliance and the family who helped launch one of the nation’s strongest agricultural advocacy offices, ASA celebrated its 100th anniversary on the Indiana farm where it all started with a small but significant historical marker dedication and tours of heirloom soybean plots.

ASA was formed when brothers Taylor, Noah and Finis Fouts hosted the first Corn Belt Soybean Field Day at their “Soyland Farms” operation in Camden, Indiana, Sept. 3, 1920. Unlike today’s more quaint and socially distanced ceremony, that event drew nearly 1,000 farmers and their families from six states, all of whom were interested in discovering more about an emerging new commodity called soybeans. The National Soybean Growers’ Association — later renamed the American Soybean Association — was formed that very day.

The outdoor ceremony was streamed live for soy supporters to celebrate safely across the country. Originally planned was a group picture emulating a historic black and white photo of the original attendees, but instead, farm families from throughout the soybean states submitted dozens of photos for a special video montage leading up to the live event. Among those helping the organization celebrate in Indiana were USDA Deputy Secretary of Agriculture Steve Censky, who served the soy industry as ASA CEO for two decades, and Indiana governor Eric Holcomb, along with other notable guests from Purdue University, Indiana Soybean Alliance, the Fouts family and ASA’s past and present leadership.

Speaking with respect and appreciation of the hardworking and pioneering soy industry, Governor Holcomb commented, “What hasn’t changed in 100 years is the resilience and eternal optimism – timeless traits.” He also shared the entertaining tale of Taylor Fouts delaying his wedding hour to finish his daily work in the soybean fields.

Deputy Sec. Censky spoke of the long, successful collaboration between USDA and the soy family, which he shared dates back to that first Fouts Farm event in Indiana 100 years ago. After providing comments on USDA agriculture priorities including COVID-19 relief, Censky referenced a quote in American Soybean magazine from former ASA president Tony Anderson of Ohio, who profoundly said, “ASA isn’t relevant because it’s 100 years old. It’s 100 years old because it’s relevant.”

ASA debuted a special video history of the Fouts Family and Soyland Farm, and—something you could only be lucky enough to see once in a hundred years!—a live musical performance by past and current ASA board members of Growing Soybeans to Get Along, a song written by Taylor Fouts and sung at the first soybean event back in 1920.

The anniversary program was hosted by Master of Ceremonies Max Armstrong and featured a lineup of notable speakers including:

Other speakers included platinum event sponsors, which are Bayer, Corteva Agriscience, FMC, Syngenta, John Deere, United Soybean Board, Illinois Soybean Association, Kentucky Soybean Promotion Board, and last but not least, Indiana Soybean Alliance. ASA is thankful to all level sponsors and other special guests. For more information on the 100th anniversary of the American Soybean Association, visit ASA100Years.com.

Scout soybeans for stink bugs and defoliators through R7
September 14, 2020