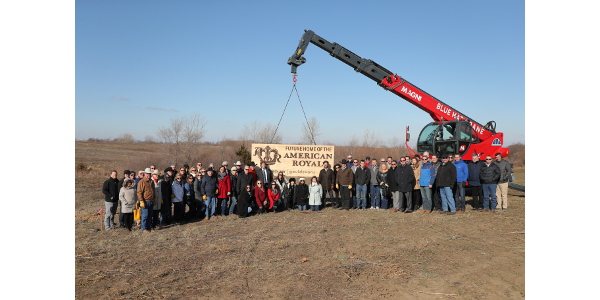 KANSAS CITY, Kan. — The American Royal Association is one step closer to its future home after recently acquiring 115 acres in Kansas City, Kansas. The Association’s vision is to be the national destination for the food and agriculture industry, the Epicenter of Agriculture – a vision that will elevate the presence of the longstanding Kansas City tradition.

“My late father, Neal Patterson, believed in the value the American Royal holds for the future of agriculture,” said Lindsey Patterson Smith, member of the American Royal Board of Directors and Director of the Patterson Family Foundation. “While we wish he were here to see this progress, my family and I are proud to be involved in this important initiative and are excited to see what the future holds. This is about more than just building a state-of-the-art complex; it is about creating a place where relevant conversations and events around food, fiber and fuel happen. The American Royal will be a hub that brings people of all ages and backgrounds together to celebrate and advance the industry that impacts all of us every day.”

The one million plus square foot complex with accompanying outdoor plaza/arena will allow for an expansion of the current 14-week programming to 365 days of the year. The highly flexible facility features over 800,000 square feet of indoor, programmable event space including significant barn and exposition areas, three performance arenas, one warm-up arena, a large educational area with integration throughout the entire complex, and over 50,000 square feet of high-end exhibit space.

The American Royal has been a nationally recognized brand of excellence for more than a century. Beginning in 1899 as the National Hereford Show, the American Royal has evolved into a comprehensive season of food and agriculture activity, hosting a variety of events. Today, the Kansas City tradition celebrates its 120-year anniversary and is experiencing a successful year of growth and expanded reach.

“Support for the American Royal is strong and growing,” said Glen Alan Phillips, president and CEO of the American Royal.  “We have contestants coming to Kansas City from over 38 states and 14 countries to compete in our various events. Our livestock and equine shows were up in entries and maxed out the current facilities. Our Pro Rodeo sold out, including 200 standing-room-only tickets, and the American Royal World Series of Barbecue continues to be the world’s largest barbecue competition. We’re excited about this continued growth and the opportunities the new complex will provide to fill these needs in the future.”

To create and construct this industry hub, the American Royal selected JE Dunn Construction and Gould Evans as the design-build team.

Randy Bredar, Executive Vice President of JE Dunn Construction noted, “Like the American Royal, JE Dunn Construction has roots that run deep in Kansas City and across the region. We are honored to be working alongside the leadership of the American Royal and Gould Evans on a project of this magnitude and importance. Together, we are ready to design and construct the nation’s Epicenter of Agriculture, right here in our home of Kansas City.”

“This is one of those design opportunities that, at its core, combines a rich history with a dynamic vision and the challenge to create the experiences that celebrate both,” said Tony Rohr, National Managing Principal at Gould Evans. “We are proud to be a part of the team to bring the American Royal vision to life.”

A ceremonial groundbreaking is expected Spring 2020, with construction beginning Summer 2020. The core complex is to be complete by winter of 2021.

Steak Cookoff at the 3i SHOW