Home / Alabama / American Pecans launches ‘Pecanceled Flights Set Right’ campaign
A new user experience is coming! We'll be asking you to login to your Morning Ag Clips account March 1st to access these new features.
We can't wait to share them with you! Read more here. 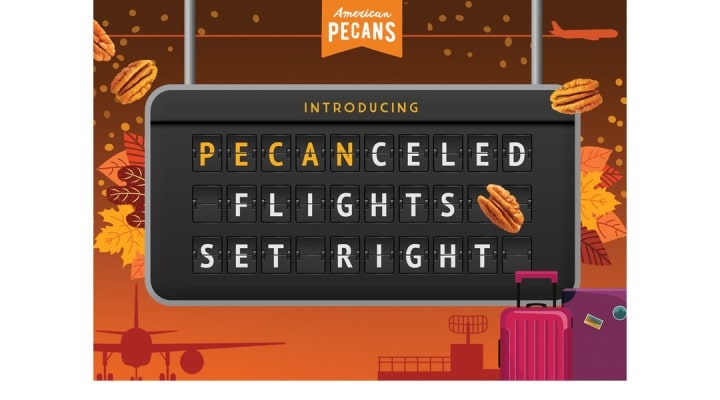 U.S. travelers with a canceled flight can enter for a chance to win First Class Thanksgiving travel for five years. (Courtesy Photo)

FORT WORTH, Texas — Traveling is expected to be nuts as the U.S. nears its most anticipated Thanksgiving of the century. Americans are eager to make it home for the holidays after last year’s gatherings were scaled back due to the pandemic, but as news of more travel woes top headlines each week, one in five (21%) admit they’re worried about flight delays and cancellations, according to a new YouGov survey commissioned by American Pecans.

“As Thanksgiving experts, we know how important it is for loved ones to gather for quality turkey (and pecan) time. There’s a reason it’s the busiest travel week of the year,” said Alex Ott, Executive Director of the American Pecan Council. “While we cannot get your flight out on time, we’re bringing travelers a little taste of home as they await their treasured Thanksgiving meals and moments.”

‘Pecanceled’ Flights Set Right SweepstakesU.S. travelers who miss their celebration due to a ‘pecanceled’ flight may enter to win the ‘Pecanceled’ Flights Set Right Sweepstakes. One ‘Pie in the Sky’ grand-prize winner will receive: roundtrip, First Class air travel for the next five years to their Thanksgiving destination (within the continental U.S.), a travel accessory package, a Thanksgiving do-over meal delivered to their door, and a year’s worth of American Pecans.

To enter, visit PecanceledFlights.com and submit your ‘pecanceled’ flight story. The sweepstakes runs nationwide November 22-30, 2021. One grand prize winner will be selected and contacted in December. Terms & Conditions: https://americanpecan.com/pfsrsweeps/

Farmer’s Fridge PartnershipIn partnership with Farmer’s Fridge, American Pecans is giving away free, limited-edition pecan pie snack bites in eight major airports from coast-to-coast. Even if you don’t win the grand prize, anyone whose flight gets delayed or ‘pecanceled’ is eligible to receive these pecan treats, which are a tasty snack to help fuel weary passengers through the Thanksgiving travel season.

Starting Monday, November 22, simply DM @americanpecan on Facebook, Instagram, or Twitter with your canceled/delayed flight information and they’ll send you a code to get a sweet little taste of home from a Farmer’s Fridge vending machine right there at the airport (for a limited time while supplies last).

About the American Pecan CouncilThe American Pecan Council (APC) is a group of passionate pecan growers and shellers whose life work is dedicated to growing, harvesting and processing America’s native nut. Founded in 2016 through a Federal Marketing Order, the APC’s mission is to promote the many benefits of the American Pecan and help tell the story of this truly unique nut. With oversight by the USDA, APC aims to build consumer demand, develop markets and establish industry standards. APC is based in Fort Worth, Texas, and funded by pecan handlers in 15 pecan-producing states: Alabama, Arkansas, Arizona, California, Florida, Georgia, Kansas, Louisiana, Missouri, Mississippi, North Carolina, New Mexico, Oklahoma, South Carolina, and Texas. To learn more visit www.AmericanPecan.com.

About Farmer’s FridgeFarmer’s Fridge makes it simple for everyone to eat well. The company operates hundreds of automated smart Fridges across airports, hospitals, office buildings and universities, offers a direct-to-consumer delivery program spanning 42 states, and partners with leading retailers including Target, Jewel-Osco and GoPuff. Since 2013, the company has sold more than 5 million meals. Learn more at farmersfridge.com.

1All figures, unless otherwise stated, are from YouGov Plc. Total sample size was 2,439 adults. Fieldwork was undertaken between November 3-5, 2021. The survey was carried out online. The figures have been weighted and are representative of all U.S. adults (aged 18+).