Home / Illinois / American Honey Queen & Princess selected
A new user experience is coming! We'll be asking you to login to your Morning Ag Clips account March 1st to access these new features.
We can't wait to share them with you! Read more here. 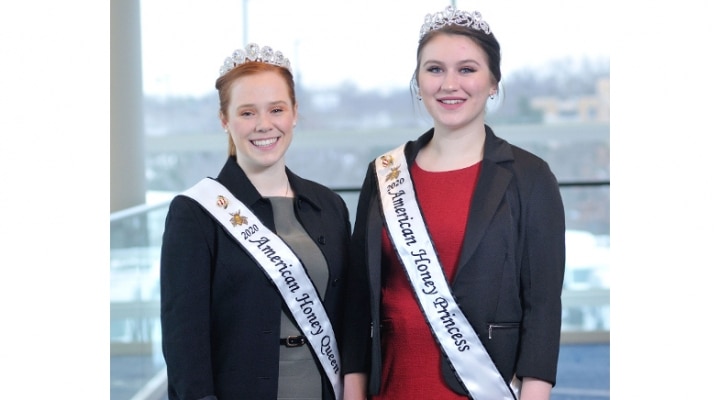 Mary and Sydnie will spend the next year promoting the beekeeping industry throughout the United States in a wide variety of venues, including fairs, festivals, schools, and media interviews. (Courtesy Photo)

SCHAUMBURG, Ill. — The American Beekeeping Federation is proud to announce that Mary Reisinger and Sydnie Paulsrud were selected as the 2020 American Honey Queen and Princess at its annual January convention in Schaumburg, IL.

Queen Mary is the 19-year-old daughter Mary is the 19-year-old daughter of Peter and Stephanie Reisinger of Parker, TX, and the granddaughter of Michael and Teresa Reisinger of Richardson, TX, and of Shirley Roberts of Plano, TX. She is a senior at the University of Texas at Dallas, studying speech-language pathology. Mary is an active volunteer in the Collin County Beekeepers Association and currently tends to six hives. She previously served as the Texas Honey Queen.

Princess Sydnie is the 20-year-old daughter of Thea Weinberger of Eau Claire, WI, and Jack Paulsrud of Augusta, WI, and the granddaughter of Jean Severson of Eau Claire, WI. Prior to serving as a spokesperson for the beekeeping and honey industry, she studied childcare services in college. Hailing from Chippewa Falls, WI, Sydnie also works for DHL-Fleet Farm Distribution Center. She previously served as the Wisconsin Honey Queen.

Mary and Sydnie will spend the next year promoting the beekeeping industry throughout the United States in a wide variety of venues, including fairs, festivals, schools, and media interviews. To schedule an appearance with American Honey Queen Mary Reisinger or American Honey Princess Sydnie Paulsrud, please contact American Honey Queen Program Chairperson Anna Kettlewell at 414.545.5514.