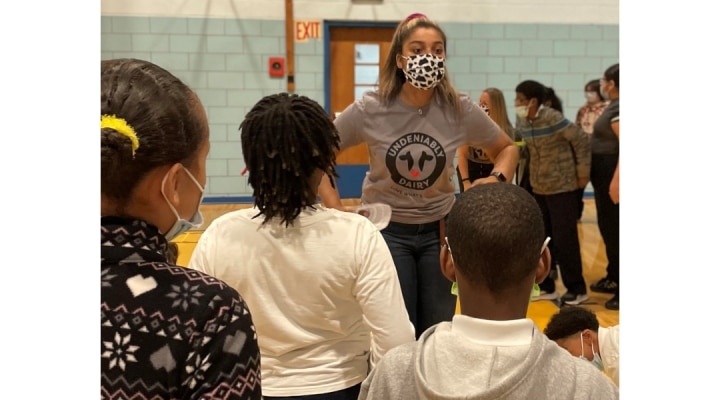 The Milk to Metro campaign was developed to give the dairy princesses and dairy farmers the opportunity to interact with urban consumers and promote New York dairy products. The campaign also allows them to see how ADA North East works in an urban setting to sell more dairy through our school, health professional and sports marketing programs.

The princesses visited the Anna M. Short School PS 146 in Manhattan to meet with fourth grade students and led several interactive dairy education activities. The school was selected for the visit because of its participation in ADA North East school nutrition programs, including Breakfast After the Bell, Fuel Up to Play 60, and the New York Thursdays program that features locally sourced milk and other food products on school menus.

“It was exciting to see how the school uses milk and milk products, and I really enjoyed hearing and answering the students’ questions about where their milk comes from,” said Benjamin.

Robarge echoed the sentiment, adding, “We were able to meet with some students while they ate breakfast in their classrooms, and then had great interaction with more students in the gym where we got to involve them in the dairy knowledge activities.”

Another stop for the princesses included the Armory Track in Washington Heights, the home of one of the “fastest tracks in the world,” that promotes our “Refuel with Chocolate Milk” campaign during more than 100 track and field competitions, where more than 220,000 student athletes train and 300,000 visitors tour.

“As an athlete who has used ‘Refuel with Chocolate Milk’ as my dairy promotion platform, I appreciated getting to run on the Armory track where many Olympians have and will run, and to see the wonderful signage with the ADA North East and Refuel logos,” said Benjamin.

Also a student athlete who refuels with chocolate milk, Robarge said, “It’s reassuring to know that the students who run at the Armory also have chocolate milk available to them to fuel their bodies after a workout.”

“I am excited to be able to talk to our New York farmers and let them know that students in New York City are learning about their products that are being used in the schools,” said Benjamin.

“This trip reinforced that connecting with consumers in rural and urban areas is so crucial to the success of not only farmers, but also business owners, as well,” added Robarge. 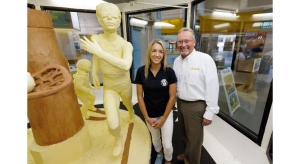 SYRACUSE, N.Y. — “Refuel Her Greatness – Celebrating the 50th Anniversary of Title IX” is the theme of the 54th Annual Butter Sculpture at the New York State Fair. This year’s butter sculpture, sponsored by Wegmans, spotlights female athletes and how today’s athletes refuel with chocolate milk. The butter sculpture features a progression of female athletes ranging in age […] 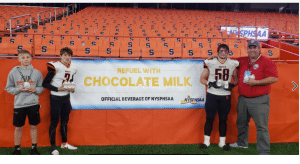