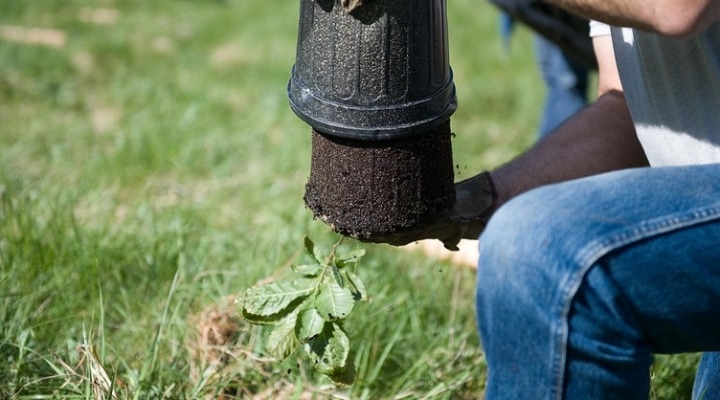 The American Chestnut Research and Restoration Center (ACRRC) has worked on a transgenic American Chestnut that is resistant to the blight. Their research has currently reached a public commentary phase with the USDA. (Stock photo by Jared M. Dort / Wayne National Forest via Flickr/Creative Commons)

GREENWICH, N.Y. — The American Chestnut. A tree that was once so plentiful that it lead to the creation of songs, lined the main streets of cities and towns, a mainstay tree for colonial furniture, and filled the woodlands throughout the country. All of that changed in the early 1900’s when a blight was introduced through the import of ornamental asian chestnuts. Recently, American Chestnut Research and Restoration Center (ACRRC), has worked on a transgenic American Chestnut that is resistant to the blight. Their research has currently reached a public commentary phase with the USDA.

“In the late 1800’s when the import of ornamental chestnuts began, there wasn’t a lot of information on preventing the spread of plant pathogens,” said Dakota F. Matthews, the molecular lab manager for Director William Powell at ACRRC. “People planted them whenever and wherever they wanted.”

According to Matthews, the death knell for the American chestnut (Castanea denata) was first sounded when the Chestnut Blight struck in 1904 at the Bronx Zoo. “The blight is a fungal pathogen from Asia,” said Matthews. “It co-evolved with Chinese chestnut, where it will infect the tree but doesn’t kill it. After the it was found at in the Bronx, it was continued to be monitored as the disease spread. In the first half of the 1900’s, this blight spread through the entire range of the American tree, killing any that weren’t severely isolated.”

The blight changed the American landscape that continues to this day. “The only chestnuts that survived are from root sprouts,” said Matthews. “You’ll see a monster root system even for a small tree, which will typically die after eight to ten years.”

Interestingly enough, even the lack of chestnuts in an area doesn’t prevent the blight from living on to infect future trees. “You would think if you cut down all the chestnut in an area, let it sit for 20 years and replant, you’d be fine,” said Matthews. “However it can survive on Oak and other alternative hosts.”

ACRRC has spent years working to find a way to combat the blight at a genetic level. “Dr. Powell’s initial research was working on infecting the fungal tissue with a hypo-virus to make it less competitive, so it wouldn’t kill a tree completely,” said Matthews. “Then NYS chapter member, Mr. Herb Darling, approached Dr. Powell and Dr. Charles Maynard about taking a transgenic (biotechnological approach) to modifying the chestnut itself. He [Darling] had a couple of massive chestnut trees that he had managed and protected. He built scaffolding around the entire tree to pollinate it, providing us with a huge source of NYS grown chestnuts for years. He did amazing work and this project wouldn’t be possible without him.”

Using immature embryos as a base, the team at ACRRC started the laborious process of finding what might work to save the chestnut. According to Matthews, the winning combination proved to be the agrobacterium that creates burls on trees, along with a gene that from wheat that breaks down the oxalic acid produced by the blight. “After thousands of transformations and attempts, we developed a blight resistant chestnut,” said Matthews. “We then started doing a widespread breeding program with transgenic pollen and trying to crossbreed with natural trees. We sent pollen to collaborators in Indiana, Maine, Penn., etc. Using a grant from the Templeton Foundation, we have selectively harvested demonstration forests so that we can look at the long term ecological effects of reintroducing the tree to its range. We’re getting about 1-2,000 crossed chestnuts each year, and fifty percent of them will inherit the transgenic gene.”

ACRRC has reached a pivotal point in their research, where they are now at a public commentary period with the USDA on their work. “Here is where we can use all the help we can get,” said Matthews. “People can write a brief comment on why they want to see our Chestnut project continue to the USDA website. After that. the USDA will either say you’re good to go, or you have to do more research, We’re pretty close to the end of that process from our communications with the USDA, and we will then head on to the EPA for their approval.

The four sides of the Tree Farm sign: Water. Wildlife. Recreation. Wood. The mission of the NY Tree Farm Program is to promote the growing of renewable forest resources on private lands in New York State while protecting environmental benefits and increasing public understanding of all benefits of productive forestry.

For more information about New York Tree Farm, and to get involved, please visit: nytreefarm.org.

What happened to the beef?