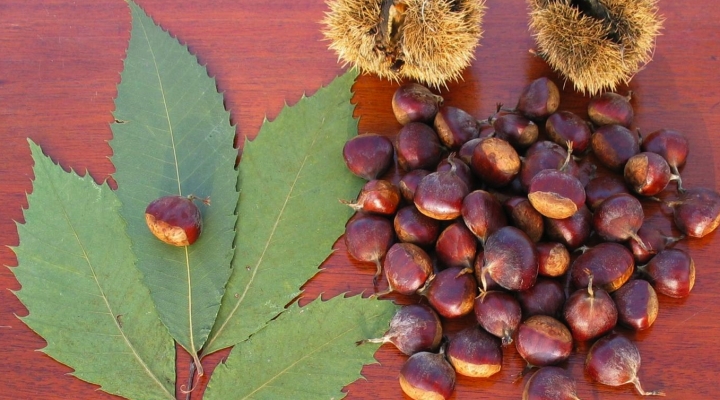 Mature chestnut trees often grew straight and branch-free for 50 feet and could grow up to 100 feet tall with a trunk diameter of 14 feet at a few feet above ground level. For three centuries, many barns and homes near the Appalachian Mountains were made from American chestnut, and the trees provided untold tons of food for wildlife and humans. (American Chestnut Foundation, Flickr/Creative Commons)

PHILADELPHIA — The nearly century-old effort to employ selective breeding to rescue the American chestnut, which has been rendered functionally extinct by an introduced disease — Chestnut blight, eventually will succeed, but it will take longer than many people expect.

That is the gist of findings from a new study conducted by a research team composed of scientists from Penn State, The American Chestnut Foundation and State University of New York. This research should tamp down expectations of both the public and some members of the science community that victory is imminent, but it also provides reassurance that the rescue ultimately will result in chestnuts flourishing in forests again, according to lead author Kim Steiner, professor of forest biology, Penn State College of Agricultural Sciences.

To reach their conclusions, researchers reviewed and evaluated decades of breeding records and transgenic experiments, new experimental data, and made projections related to how recurrent selection and incorporation of transgenic material into breeding lines will expedite blight resistance. They considered experimentally based estimates of heritability and genetic gain for blight resistance that were never available before this research was conducted.

“Those estimates are why we know, now, for sure that it is just a matter of time,” Steiner said.

“Very few people understand the magnitude of the breeding challenge embarked upon by The American Chestnut Foundation when it began in 1983. Just to complete the B3F2 generation of breeding and selection — the final generation as originally envisioned — has meant that 73,000 trees must be created by hand pollination and grown and tested in plantations for a minimum of three years.”

B3F2 is the third backcross, intercrossed generation of Chinese and American chestnuts.

The process began in 2002 with the foundation’s main breeding program and probably will not be completed until 2022, Steiner added. Furthermore, it is being duplicated through the work of volunteers in 13 affiliated state programs. The Pennsylvania program is overseen by Sara Fitzsimmons, a research technician in Penn State’s Department of Ecosystem Science and Management and one of the study’s co-authors.

Developing an accurate and comprehensive status report on the chestnut-rescue effort and identifying next steps and expectations of progress were the main reasons behind the research, explained Steiner, who is a board member of The American Chestnut Foundation and senior science adviser to the board.

“For a number of years, the foundation has made seed from B3F2 trees available for special purposes,” he said. “But the average blight resistance of those seedlings was not expected to be high until the B3F2 plantation is completed and culled to the few hundred most-resistant trees. Our current findings indicate that, even then, average levels of resistance will not match Chinese chestnut.”

However, some seeds from the B3F2 plantation will carry genes for high resistance, and there may be enough of them to begin restoration work, Steiner noted. Ultimately, he explained, the foundation’s goal is to give the American chestnut the “genetic wherewithal” to survive to maturity and evolve on its own. “So we are not concerned about uniformity from tree to tree in the way that a landscape nursery must be.”

In the research, recently published in New Forests, progress and future steps were summarized in two approaches — The American Chestnut Foundation’s system of hybridizing with the blight-resistant Chinese chestnut species and then backcrossing repeatedly to recover the American-type tree, and State University of New York College of Environmental Science and Forestry’s transformation of the American chestnut with a resistance-conferring transgene. That effort has been sponsored by the New York Chapter of The American Chestnut Foundation.

Several decades of effort have been invested in each approach, and more work remains, researchers noted, but results provide the best experimental evidence since the blight hit North America sometime after 1904 that success is within practical reach.

“We believe that the breeding program may need an additional one or two generations of recurrent selection to maximize resistance,” Steiner said. “The New York transgenic tree still must undergo regulatory review before release, and it must be tested in harshly competitive, natural environments before its true worth is understood. If it proves out, we expect that the New York work will be integrated with the foundation’s conventional breeding program because both lines of work have inherent strengths.”

Steiner, who is director of The Arboretum at Penn State, where the Pennsylvania program’s B3F2 plantation is growing, called the chestnut-restoration effort the most ambitious, protracted and technically difficult rescue of a species that ever has been undertaken. And he credits the volunteer members of The American Chestnut Foundation for making it happen.

As a graduate student at Michigan State University in the fall of 1970, Steiner wrote a breeding plan to solve the American chestnut problem as a class assignment. He clearly remembers the professor’s assessment that the plan was workable but utterly impractical. Industry, the professor said, had no interest in American chestnut, and government agencies would not undertake to breed a blight-resistant chestnut after abandoning two earlier long-term programs with the same goal.

“As it turns out, now 47 years later, he was correct on those two points,” Steiner recalls. “But he did not reckon on the ability of a nonprofit organization like The American Chestnut Foundation to accomplish a ‘lost-cause’ conservation task through the power of thousands of volunteer citizen-scientists and philanthropic supporters.”

Their enthusiasm and the wonderful example of this model inspired Steiner in the late 1990s to offer his services to the organization as a volunteer science adviser. And he is not alone. A great many university, agency and industry scientists have assisted the foundation in small and large ways.

The promise that the foundation’s breeding program will succeed has leveraged tens of millions of dollars in supporting research, according to Steiner. “And since the mid-1990s, there has been an explosion in published research about American chestnut, a species that has been ecologically and economically insignificant since the early decades of the last century,” he added.