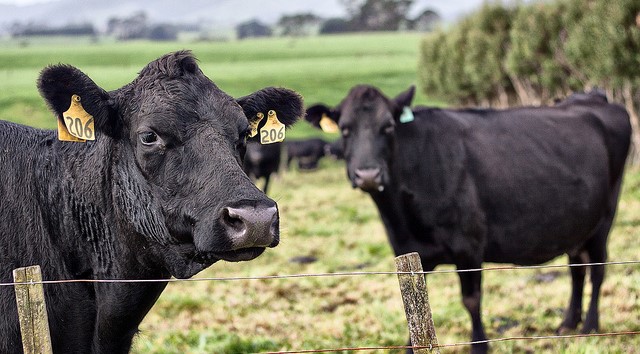 The new campaign will promote the value of registered Angus genetics to the backbone of the beef industry. (Dave Young, Flickr/Creative Commons)

ST. JOSEPH, Mo. — The American Angus Association® announces the launch of a new national advertising campaign promoting the value of registered Angus genetics to the backbone of the beef industry – commercial cattle producers. The new campaign showcases the registered Angus bull, cow and calf, with each to be promoted within its respective season.

Along with the print campaign, a new companion website serves as a gathering point for cattle producers who desire to learn more about historic Angus strengths in maternal, carcass and performance qualities.

“The new advertisements ultimately tie back to our Long Range Strategic Plan,” said Clint Mefford, director of communications. “We want to reinforce the value of using registered Angus bulls through a comprehensive promotional and educational campaign geared toward commercial producers.”

The first advertisement — assertively named “Director of Breed Improvement” — showcases the dominance of the Angus bull and his influence on America’s cow herd. With more cattle qualifying for the Certified Angus Beef ® brand (CAB®) than ever before, it’s clear that the Angus bull has had a continuing impact on the commercial cattle industry. The Director of Breed Improvement advertisements are currently running in national and regional publications throughout the United States, as well as digitally on select online platforms.

“There is no denying the importance of the registered Angus bull in America’s predominantly black-hided cow herd,” said Mefford. “This campaign is solely focused on the commercial sector and serves as a resource for the pride our members have in their registered Angus seedstock.”

The second advertisement will make its debut this summer during feeder-calf sale season. It is rightfully named “Head of the Class,” as Angus and Angus-influenced feeder calves consistently find themselves at the top of the chart when it comes to sale averages and carcass quality. According to the 2016 Here’s the Premium study conducted by Certified Angus Beef LLC, Angus steers and heifers bring an average of almost $25 more per head than their non-Angus competitors. As an added bonus, when producers market Angus-sired calves, there is documented value from that transaction. The Association’s commercial programs, AngusSource® and Angus LinkSM are designed to help commercial producers find the extra value.

Finally, the third advertisement focuses on the maternal side of the Angus business – highlighting the Angus cow and her maternal strengths. Named the “Most Valuable Player” for a reason, she provides unparalleled maternal instincts and is adaptable to nearly any region. The “Most Valuable Player” ads will be placed strategically in publications and online during the fall calving season.

“The American Angus Association is known for groundbreaking marketing initiatives, dating back to the early 60’s influential advertisement campaigns,” said Mefford. “As we look to the future of our communication efforts, we feel our new campaign and website will set the stage for the next generation of Angus advertisements and will broaden the Angus influence in America’s herd even further.”