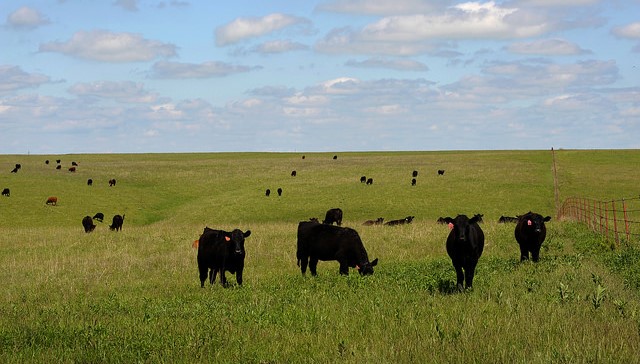 ST. JOSEPH, Mo. — The American Angus Association® experienced another outstanding year, confirmed by the fiscal year-end report. As improvements in herd quality and performance continued and record amounts of beef were produced, the Angus breed continued to spread influence in the beef industry. The 2018 fiscal year, which spanned from Oct. 1, 2017, to Sept. 30, 2018, recorded 327,067 total registrations for Angus cattle – the 18th largest year in the Association’s 135-year history. The Association and its four entities experienced exceptional growth across nearly all business metrics, and total assets for the organization reached more than $66.9 million.

“2018 has been another great year for the Association and the Angus breed,” said Allen Moczygemba, American Angus Association CEO. “Our four entities have made tremendous advancements, and the demand for registered Angus bulls continues to show strength.”

The comprehensive AngusSource programs and services are aimed at improving profitability in the commercial sector of the cattle industry. Program options include Age and Source, Non-Hormone Treated Cattle (NHTC), AS-NeverEver3 (AS-NE3), AS-Cattle Care and Handling (AS-CCH) and AS-Calf Management (AS-CM).

Finally, a new MaternalPlus® rebate program resulted in a 21.9 percent increase in the number of cows enrolled in the program. MaternalPlus is a voluntary, inventory-based reporting system designed to capture additional reproductive trait data and, ultimately, expand reproductive and lifetime productivity tools.

AGI also launched Angus GSSM and HD50K™ for Angus. Angus GS is the first Angus-specific genomic profiler, which facilitates genomic selection and accelerates breeding progress for producers by using a broad array of research markers. HD50K for Angus is a new genotyping platform developed specifically for Angus seedstock producers. Both profiles are designed specifically for the Angus breed and represent a significant reduction in cost for members. Additionally, AGI made history in 2018 by surpassing 500,000 genotypes in the database, with more than 540,000 by the end of the fiscal year – more than three times the next largest beef genomic evaluation. Genomic tests submitted during fiscal year 2018 grew by 28 percent from the last fiscal year, totaling more than 162,000 tests.

Angus Media, a for-profit entity of the American Angus Association, achieved major milestones during fiscal year 2018. Both the Angus Journal® and the Angus Beef Bulletin® unveiled dramatic new designs, which were met with great acclaim.

Print production still remains a staple at Angus Media. Targeted to the Association membership, the Angus Journalmaintains a paid circulation of 13,000. The Angus Beef Bulletin, a publication catered to commercial producers across the country who are highly active in the Angus business, continues to be one of the industry’s largest-circulated publications with 65,000 subscribers.

Angus Media has a growing online presence to accompany its print publications. Angus Journal Daily and Beef Bulletin Extra reach an extensive online audience with 7,500 and 4,300 e-blast subscribers, respectively. Additionally, the Angus Journal has accumulated more than 14,500 likes on its Facebook page.

Digital marketing also became a focus area for Angus Media this year. A soft launch of Angus Sales TV in January 2018 prompted a 26 percent increase in online sale book views from spring 2017 sales. Digital sale book page views, which now offer a video clips feature, are now at 42 million. This year also saw a transition in the way ads were served and appear on angus.org to bring the most accurate website data and allowed Angus Media to provide more creative consumer reports, and retargeting became an offering for advertisers, as well.

2018 marked The Angus Report’s seventh year on RFD-TV. With 52 episodes aired, the 30-minute show, which is a leading source of industry news for cattlemen and women across the country, generated an impressive 1.9 million views on RFD-TV.

Two full-length I Am Angus documentaries were released this year – “I Am Angus | Fabric of Our Forebears” and “Raising the Steaks”. “Raising the Steaks” appeared on RFD-TV on Thanksgiving Day and followed one consumer couple as they learned about the beef production process by touring the entire beef production chain. “I Am Angus | Fabric of Our Forebears” dove into the rich heritage of the Angus breed and the varied people who now raise Angus across the world. From the original Aberdeen-Angus herds in Scotland to the plains of South Dakota, down to the bayou and everywhere in between, the Angus story was told from eight breeders’ perspectives.

The Angus Foundation, the 501(c)(3) not-for-profit arm of the American Angus Association, has a rich history of support for the future of Angus education, youth and research. This year, more than $1.5 million in contributions and support was received from generous donors and funding sources.

The Angus Foundation also continues to invest in key research conducted with industry partners. Since 2005, the Foundation has invested more than $1.4 million in research ranging from eating experience to reproduction and growth performance. These continued research efforts are performed with producers in mind as they have the potential to drive breed improvements and Angus breeders’ future decisions.

Certified Angus Beef LLC (CAB) commemorated its 40th anniversary by selling 1.21 billion pounds of CAB product for the year. Sales increased by 8.1 percent from last year, while a new monthly record was established in August when 112.7 million pounds were sold. Almost 19 percent of all fed cattle harvested qualified for the brand, and on average, nearly 100,000 head per week qualified as CAB.

Additionally, CAB set sales records in all 12 months of the 2018 year. This included seven out of the 10 best sales months in the brand’s 40-year history, including August, which proved to be the most successful sales month ever recorded.

Responding to ever-growing consumer demand for premium beef, family Angus ranchers have continued to grow the size and improve the quality of their herds through the best genetics and management practices. This collective improvement translated into a total of 5.18 million cattle certified for the brand; that’s an increase of 650,000 head or 14.3 percent, compared to 2017.

“As we celebrate our numerous successes, it’s more important than ever that we don’t rest on our laurels but continue to plan for the future,” Moczygemba said.

The celebration of another outstanding year will continue during the 2018 Angus Convention, November 3-5, where thousands of cattlemen and women are expected to gather for the three-day event in Columbus, Ohio. Visit www.angusconvention.com for more information.