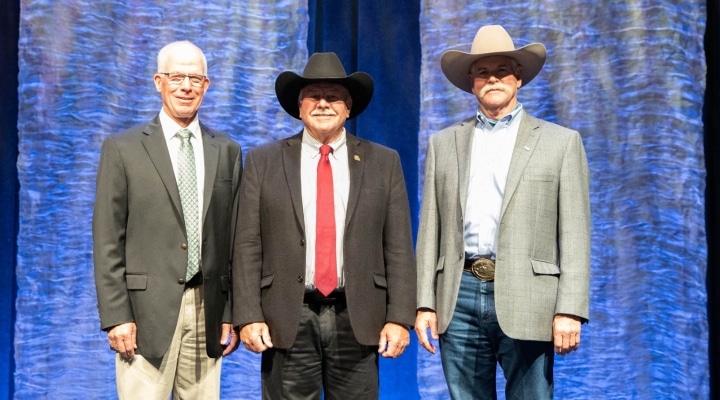 KANSAS CITY, Mo. — Five new directors were elected to the 2020-2021 American Angus Association® board of directors, as well as a president and chairman, and a vice president and treasurer of the board, during the 137th Annual Convention of Delegates hosted in Kansas City, Missouri.

Delegates voted to represent Association members at the 137th Annual Meeting and elected the 2020-2021 officers and directors. Directors can serve up to two three-year terms on the board and, if elected, serve additional one-year terms in office as president and chairman and/or vice president and treasurer.

Mark Ahearn and his family established Turner Meadow Ranch in East Texas in the mid-1980s. Apart from his 35-year career in law enforcement, Ahearn’s passion has always lied in raising high-quality Angus cattle. He has studied pedigrees and learned the business from the ground up. His family has grown their herd to about 200 females while being active in the Texas Angus Association. Ahearn served in a leadership role with the Texas Angus Association for 16 years. In addition to creating numerous educational opportunities and sale events, Ahearn was also responsible for creating and writing the policy for the Raymond Moore Endowment Scholarship Fund which benefits Texas Junior Angus members.

Smitty Lamb grew up on a small row crop farm in East Georgia where he discovered his passion for Angus cattle at an early age. He followed that drive to the University of Georgia (UGA) where he earned a bachelor’s degree in animal science and a master’s degree in meat and muscle biology. His career eventually led him to an opportunity in the cotton industry, but he always came home to Angus cattle. His family has owned and operated Ogeechee Angus Farm since 1997, and it has since become one of the most reliable sources for Angus genetics in the Southeast. Since 2017, Ogeechee Angus Farm has marketed more than 100 bulls annually. Lamb has served in leadership roles with the Georgia Angus Association, as well as the chairman of the Southern National Angus Show committee and the co-committee chair of the 2009 National Junior Angus Show. The Lambs were awarded the Georgia Angus Association Member of the Year in 2017 for their service to the organization.

Charles Mogck is a third-generation Angus breeder from South Dakota. Mogck has built upon his family’s heritage in the breed and increased their herd to 400 registered females while marketing 120 bulls annually. They farm 2,000 acres of corn, beans and wheat with an additional 2,500 acres of pasture and hay ground. Mogck & Sons routinely buys feeder cattle from their commercial customers, which allows them to collect data on their customers cattle. Their operation actively utilizes Association programs such as MaternalPlus™ and Angus Herd Improvement Records℠ (AHIR). Mogck records ultrasound, carcass and genomic information to make the best decisions for the future of their herd.

David Dal Porto, Oakley, California, was elected as Association president and chairman of the board. Dal Porto succeeds Don Schiefelbein, Kimball, Minnesota, who served as president from 2019-2020. Dal Porto and his wife, Jeanene, manage their registered and commercial Angus operation in Oakley, Brentwood and northern California. They have three children—Lindsey, AJ and Dawson. Dal Porto has firsthand experience at every level in the evolution of performance information and how to apply it. He complements that knowledge with a management background developed from his experiences. Dal Porto and his bull sale partner, David Medeiros, were awarded the 2011 Certified Angus Beef® (CAB) Seedstock Commitment to Excellence Award at the CAB Annual Conference.

Jerry Connealy, Whitman, Nebraska, was elected by delegates to serve as Association vice president and vice chairman. He has served on the Association board of directors for six years and spent this last year as Association treasurer. The fifth-generation cattleman has operated the family ranch since 1981 with his wife, Sharon. The Connealys have three sons, Jed, Gabriel and Ben; as well as a daughter, Hannah. Jerry focuses his cow herd base on productivity traits and manages two bull sales per year, selling 300 bulls at each sale.

Chuck Grove, Forest, Virginia, who is currently serving his second term on the board of directors, will serve as the 2020-2021 Association treasurer. Grove was an American Angus Association regional manager serving Kentucky and Tennessee, and during his 39-year tenure, he also covered Virginia, Maryland, West Virginia, Delaware and Ohio. Grove and his wife, Ruth, reside on the family farm and run a 100-head Angus herd.

For more information about the American Angus Association board of directors, visit www.angus.org.