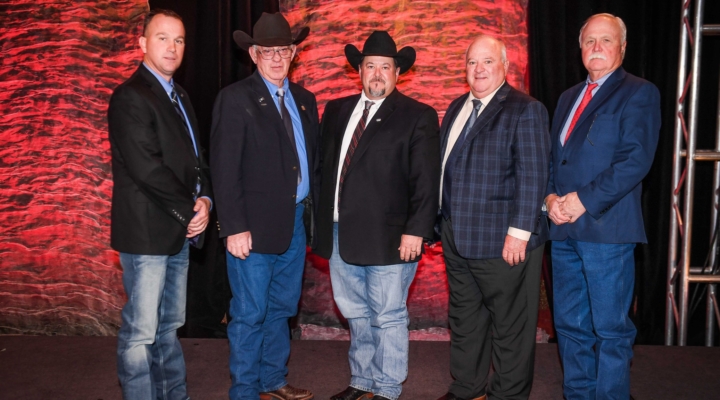 RENO, Nev. — Five directors were re-elected to the 2019-2020 American Angus Association® board of directors, as well as, a president and chairman and a vice president and vice chairman of the board, during the 136th Annual Convention of Delegates hosted at the 2019 Angus Convention in Reno, Nevada.

A total of 297 delegates from 40 states and Canada represented Association members at the Annual Convention of Delegates and elected the 2019-2020 officers and directors. Directors can serve up to two three-year terms on the board and, if elected, serve additional one-year terms in office as president and chairman and/or vice president and vice chairman.

Alan Miller, Gridley, Illinois, was re-elected to serve on the American Angus Association board of directors. Miller is a third-generation Angus breeder. His grandfather, Adam Schlipf, began an Angus cattle herd in the late 1940s and was active in the purebred Angus business through the 1960s. Forty years ago, Miller’s parents, Orlan and Carol Miller, began revitalizing the Angus herd and named the operation Prairie View Farms (PVF). PVF is a family operation that Alan and his wife, Theresa, operate in close cooperation with brother-in-law and sister Brandon and Cathy Jones.

Jonathan Perry, Fayetteville, Tennessee, was re-elected to serve on the American Angus Association board of directors. Perry realizes the value of hard work and determination evolves into a passion and a love for the beef business. Perry has spent much of his life working in the purebred business. In 1998, Fred and Rinda Clark of Deer Valley Farm, Fayetteville, Tennessee, offered him the opportunity to manage their purebred program. As the general manager of Deer Valley, Perry has developed an Angus program that balances all economically relevant traits in cattle that maintain structural soundness and phenotype. Each year, more than 500 bulls are marketed through three annual sales. Perry and his wife established the Hickory House restaurant in 2014, and it specializes in serving 100 percent Certified Angus Beef ® brand (CAB) product.

Barry Pollard, Enid, Oklahoma, was re-elected to serve on the American Angus Association board of directors. He attended Oklahoma State University (OSU), went to medical school and is a board-certified Neurosurgeon who has performed more than 18,000 surgeries. He currently farms and ranches more than 8,500 acres and has managed numerous cattle through his wheat pasture program and followed them through the finishing lots. The Pollard Farms registered Angus herd consists of more than 400 Angus cows, and with a recipient herd, together, they raise more than 450 registered Angus calves annually. Approximately 150 registered Angus bulls are sold annually at Pollard Farms either through the annual Angus bull sale or by private treaty.

Don Schiefelbein, Kimball, Minnesota, was elected by the delegates to serve as the American Angus Association president and chairman of the board. Schiefelbein, who succeeds John Pfeiffer, Jr., of Mulhall, Oklahoma, has previously served as vice president and vice chairman and treasurer, as well as six years on the board of directors.. Additionally, he serves as the 2019 National Cattlemen’s Beef Association (NCBA) policy division chairman. His family operation was started in 1955 by Frank Schiefelbein, and years later with the addition of nine sons and numerous grandchildren and great-grandchildren, the operation continues to grow as fast as the family. Today, Schiefelbein Farms runs more than 1,000 registered females, farms 4,600 acres and feeds out 7,500 head of cattle.

David Dal Porto, Oakley, California, was elected as the vice president and vice chairman of the Association. He just completed serving as the 2018-2019 Association treasurer, and is currently serving his second term on the board of directors. Dal Porto and his wife, Jeanene, manage their registered and commercial Angus operation in Oakley, Brentwood and northern California. They have three children—Lindsey, AJ and Dawson. Dal Porto has firsthand experience at every level in the evolution of performance information and how to apply it. He complements that knowledge with a management background developed from his experiences.

Jerry Connealy, of Whitman, Nebraska will serve as the treasurer of Association board of directors. Connealy is serving his second, three-year term on the board. The fifth-generation cattleman has operated the family ranch since 1981 with his wife, Sharon. The Connealys have three sons, Jed, Gabriel and Ben; as well as a daughter, Hannah. Jerry focuses his cow herd base on productivity traits and manages two bull sales per year, selling 300 bulls at each sale.