Home / Alabama / American Angus Association congratulates Heritage Foundation inductees
A new user experience is coming! We'll be asking you to login to your Morning Ag Clips account March 1st to access these new features.
We can't wait to share them with you! Read more here. 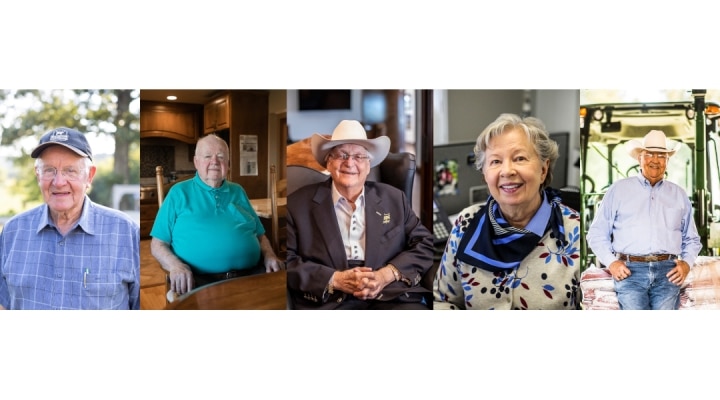 ST. JOSEPH, Mo. — Heritage. Tradition. Legacy. All words that attempt but don’t come close to truly describing the members of the Angus Heritage Foundation. Five members who embody those three terms joined the Heritage Foundation during the Awards Dinner at the 2021 National Angus Convention and Trade Show in Fort Worth, Texas.

The Association proudly celebrates the innovators and visionaries of the Angus breed through the Heritage Foundation each year. Over the past 130 years, the business breed has proven itself as an industry leader and expert. Inductees of the Heritage Foundation depict the type of individuals who built a reputation with their drive, ambition and forward-thinking attitude.

The 2021 inductees are: Billy Maples of Elkmont, Ala.; Frank Schiefelbein of Kimball, Minn.; Bob Funk of Yukon, Okla.; Margaret Dreesmann of Saint Joseph, Mo.; and Charles A. McPeake of Arnoldsville, Ga..

Billy Maples – In existence for 200 years, Maples Stock Farm got into the Angus beef business in 1937 when Mack Maples started his first Angus line of cattle. Their son, Billy — one of Mack and Doris Maples’ five children — has been passionate about Angus cattle his entire life. With the sale of a Grand Champion 4-H steer in 1948, Billy purchased eight Angus heifers to begin his own herd. Maples is a graduate of Auburn University, earning his B.S. in animal science. Following his studies, Maples returned home to continue growing his operation. He was an early adopter of performance testing and artificial insemination and participated in the Auburn University Bull Test for years, having the high-selling bull numerous times. Off the farm, Maples has an extensive history with the Alabama Farmers Federation and has had leadership responsibilities with the Alabama Cattlemen’s Association, Alabama Angus Association and the American Angus Association. Family plays an important role in Maples Stock Farm’s success. Billy’s son, Tommy, and grandson, Ben, currently manage the farm alongside him. Billy’s passion for the Angus breed is shared by his three children, seven grandchildren and five great-grandchildren.

Frank Schiefelbein – Schiefelbein Farms was started in 1955 by two city kids with a desire to raise the best beef possible and to do it as a family. Frank and Frosty have seen that dream come to fruition as they watched their boys grow and take part in farm life. As it stands now, “Grandma Frosty” and “Big Frank” have nine sons, 32 grand kids and 21 great grand kids. They have also grown the farm to the largest registered Angus operation in Minnesota and the 37th largest seedstock operation across all breeds. Frank and Frosty have kept it a purely family operation over their years of growth. Seven of their nine sons work at the farm full-time with the 8th still helping on weekends. Four grandchildren work for the operation full-time with more hoping to return after college. Throughout the years, Frank, Frosty and their boys have worked to improve the Angus breed and the cattle industry. As forward thinkers, the Schiefelbeins have been proponents of differentiating price based on the quality of the cattle. Frank believes that you don’t need to be a low-cost producer to be profitable. The Schiefelbeins are always moving forward whether it be keeping diligent records, implementing artificial insemination or offering a buyback program, they are focused on the future for their family operation.

Bob Funk – Funk was raised in Duvall, Washington where he grew up working on a family-owned dairy farm. The dairy is what started his love for farming and livestock. However, when he tried purchasing the dairy, his family encouraged him to attend college and pursue a career off the farm. Following college, Funk started at ACME Personnel, a Washington-based staffing company where he was then transferred to Oklahoma. During his time in Oklahoma, his love for cattle persisted as he purchased his first herd in the late ‘80s. Fast forward to 1996, Funk and Jarold Callahan purchased their first Angus herd which impacted the trajectory of Express Ranches. Twenty-five years later, Funk has built one of the largest seedstock operations in the United States while simultaneously being involved in all other facets of the beef production business. Beyond the cattle business, Funk strongly believes in the next generation of agriculturists. This prompted the creation of the Express Scholarship Program where over three million dollars have been awarded to America’s youth.

Margaret Dreesmann – Dreesmann was just 21 years old when she began her career at the American Angus Association in 1967. The Saint Joseph, Missouri native had no computer experience and had attended just a couple of years of junior college when a high-school friend referred Dreesmann to be her replacement as a computer programmer. Dreesmann learned a lot during her 54 years with the Association and played a vital role in improving the breed and protecting the Angus data and its integrity. At the office she was known as the “Performance Queen” for her wealth of knowledge about the Angus Herd Improvement Records/Performance programs. She was the programmer for the qualifying Pathfinder cows and bulls each year and the semi-annual sire evaluation report. Dreesmann was responsible for the programming and testing on anything that had to do with EPDs and the Angus National Cattle Evaluation, as well as registration and transfer applications. She was also instrumental in the implementation of the programming that makes the Angus office’s one-day turnaround possible. Through her 54 years, her work continued to improve the efficiency of office workflow and processes. More important than that, she made those improvements with dedication, passion, care and kindness.

Charles A. McPeake (posthumously) – McPeake, a Tennessee native, was raised on a diversified grain and livestock farm and was active in 4-H and FFA livestock competitions. He owned Angus cattle continuously since 1970. McPeake earned a B.S. degree from the University of Tennessee-Martin in 1968 and went on to work for the University of Tennessee Cooperative Extension Service. He earned a M.S. degree in 1974 (University of Tennessee-Knoxville) and a Ph.D. in animal breeding and genetics (Michigan State University) in 1977. From 1977-1990, McPeake served South Dakota and Oklahoma as a beef cattle breeding specialist. The University of Georgia (UGA) named him Professor and Head, Extension Animal Science in 1990 with program responsibility for Extension Animal Science, Dairy Science and Veterinary Medicine beginning in 1993. In 1997, he became Coordinator of Extension programs for the College of Agriculture-Natural Resources and Family and Consumer Sciences. Since his retirement in 2005, he and his son Andrew have worked together to grow their Angus seedstock operation. McPeake was involved in many organizations, serving the Beef Improvement Federation (BIF) in several capacities and was also affiliated with the American Angus Association, American Society of Animal Science, American Registry of Professional Animal Scientists, Gamma Sigma Delta honor society, Alpha Zeta honor society, Alpha Gamma Rho fraternity, cattlemen’s organizations at local, state and national levels, the American Quarter Horse Association and the Mount Rushmore Masonic Lodge #220. McPeake passed away on December 18, 2020.

To learn more about the Angus Heritage Foundation and those inducted since its inception, visit https://angusawards.com/