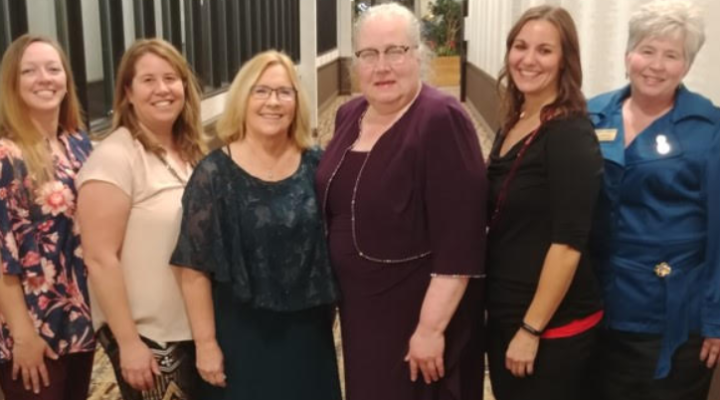 Officers returning for their second year of a two-year term are: Lesley Schmidt of Kansas Agri-Women, Vice President of Education; Katie Yost of Montana Agri-Women, Treasurer; and Natalina Sents from Iowa Agri-Women, Secretary.

More About the Officers

Zurn farms with her husband, Bill, and 2 sons in Northwestern Minnesota where they raise corn, soybeans, sugar beets and wheat. As a Past President of Minnesota Agri-Women, she additionally served four years as AAW Chair of Government Issues. She has served on many agriculture boards including Minnesota Ag in the Classroom, Northern Crops Institute Council and Minnesota Soybean Growers. On the Becker County Corn & Soybean Growers, she served as treasurer and government affairs representative. She coordinated North Dakota Common ground program for four years and most recently she was appointed to Minnesota State FSA Board.

Marshall enjoys life on a family dairy farm in Preble County, Ohio. She attends New Hope UM Church and is a leader in Bible Study Fellowship. Marshall has been sewing since she was a child and has become an avid quilter. As a leader in her community, she served as Preble County Commissioner, Preble County Fair Board member, Preble County Mental Health Board, along with a variety of other county boards. She currently serves as President on the Preble County Habitat for Humanity Board, is a CASA for Juvenile Court, and a United Way volunteer. Active in AAW since 2004, she has served as VERITAS Chair and is a past LEAVEN Award winner. Marshall is a past President of the AAW Foundation and was Nominating Chair while on the committee. In her home state, she was President and Secretary of Ohio Agri-Women and the co-chair of the 2014 Ohio Convention.

Moore, current President of North Dakota Agri-Women, is a promoter of agriculture education and local leadership, especially for youth and women. She is a working partner on their 650-acre farm from making seed orders, fertilizer application, selecting cover crops, and combining. To be on the farm and with her family, she recently left her position as District Manager of her county Soil Conservation District where she worked actively with ag producers on various methods to improve soil health and crop productivity, as well as extensive outreach and partnership in the community. Her role on the North Dakota Farm Bureau Promotion and Education committee and as county Vice-President has enhanced her communication and leadership abilities. Being a “class farmer” for 8 classrooms visited monthly, has given many students the appreciation for agriculture. She is an active member in a variety of organizations. Moore shares the reality of farm life through social media avenues, videos, media interviews and a personal blog. This gives her the opportunity to show in real time many of the things done on the farm as well as talk about how specific crops are grown, harvested and their uses. She was selected for the ND See for Yourself Pacific Northwest Soybean Tour; was a top 5 finalist in the Syngenta #rootedinag contest; and a winner of the Monsanto Grow Communities grant.

Lombardo belongs to and serves on numerous agricultural association boards. She was appointed by California Governor Schwarzenegger to the Los Angeles Regional Water Quality Control Board. Additionally, Lombardo has completed a federal appointment to the USDA’s Agriculture’s Foreign Ag Services Division. This appointment was made to the Agricultural Technical Advisory Committee for trade in fruits and vegetables. Lombardo is the Co-Founder and Chief Strategic Officer for Global Water Innovations. This company is a project developer of cost-effective brackish groundwater desalination solutions for agriculture. Additionally, they assist farmers with finding new water sources by treating oil produced water and irrigation water runoff as well as satisfying regulatory compliance for containments. Lombardo is a single mother of two daughters.

About American Agri-Women
American Agri-Women (AAW) promotes the welfare of our national security through a safe and reliable food, fiber and energy supply. Since 1974, AAW members have worked together to educate consumers; advocate for agriculture; and offer networking and professional development opportunities. Go to the AAW web site for more information and to join, www.americanagriwomen.org. Find AAW on social media at: Facebook.com/AgriWomen/, Twitter.com/Women4Ag/ (@Women4Ag) and Instagram.com/americanagriwomen/ (@americanagriwomen).