Home / National / American Agri-Women elects new national officers
A new user experience is coming! We'll be asking you to login to your Morning Ag Clips account March 1st to access these new features.
We can't wait to share them with you! Read more here. 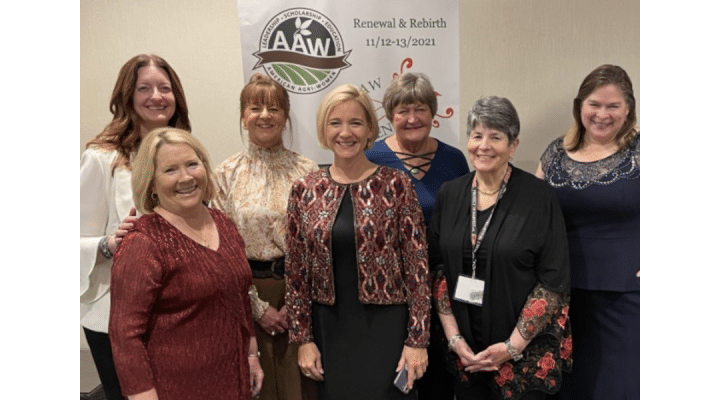 PHOENIX (AgPR) — American Agri-Women (AAW) elected its national officers at its 2021 national convention recently in Phoenix, Ariz.  AAW, a national coalition of farm, ranch and agribusiness women, is in its 47th year of advocating for agriculture.

Continuing on the national board for the second year of their two-year term are Jacquie Compston of Minden, Nev., who serves as vice president of education.  Kim Bremmer of Loyal, Wis., will continue as secretary.

More about the officer team

Heather Hampton+Knodle is a farmer, past communications consultant and association manager.  She and her family grow corn, soybeans and wheat and manage a small herd of black Angus cattle.  Knodle is dedicated to developing rural economies through incentivizing investments in telecommunications, innovative workforce development, and enabling entrepreneurship. She was the founding chairman of the Montgomery County Economic Development Corporation, the Central Illinois Economic Development Authority, and the Montgomery CEO (Creating Entrepreneurial Opportunities) program.

Rose Tryon Vancott is a 5th generation farmer who grew up on a beef, dairy, and potato ranch in Northern California. Rose and her family are actively involved in the operation of her family farm in Del Norte County, Cali.  Vancott is a retired district attorney investigator specializing in child abuse, sexual assault, and domestic violence investigations.

Kathy Goodyke has worked as a bookkeeper and tax preparer and worked in community, public and hospital nursing until her retirement in 2007.  Goodyke then took an active role on the family farm in production and equipment maintenance until her retirement from those duties in 2016.  The family farm raises corn, soybeans, edible beans, and wheat.  Since then, she has been involved with various roles at the local senior center including financial chairperson, secretary and grant writer.

Laura Hart and her family raise corn, cotton, wheat, and sorghum. Hart handles all the bookkeeping for the farm as well as other duties.  Their farm, Pioneer Farms, was recognized by the Texas Department of Agriculture Family Land Heritage program, which honors families who have owned and operated a continuous agricultural operation for 100 years or more in 2011. Hart is a vocal advocate of agriculture and has been honored at 4-H and FFA banquets for her parent leadership. She is a past president of the Hart Buyers Club, Hart Athletic Booster Club, and a Hart Independent School District school board member.

Jacquie Compston is a fifth generation native Nevadan whose roots run deep in the history of ranching. She received a Bachelor’s of Science Degree in Education and taught at Smith Valley Schools and Western Nevada College.  Compston’s family owned and operated a large family ranching and farming operation in Western Nevada that included, registered and commercial cowherds, a commercial feedlot, and production of, seed garlic, small grains, and alfalfa.

Kim Bremmer started Ag Inspirations in 2015 and has been advocating for farmers as a professional speaker, traveling across the country as well as internationally. She is passionate about protecting the use of science, technology and innovation in how we grow and raise food. Bremmer is also the executive director of Venture Dairy Cooperative, a new third-party milk verification co-op, where she advocates on policy to help protect farmers and promote the future of dairy in Wisconsin. She serves on the executive advisory council for the American Dairy Coalition, is the president of Wisconsin Women for Agriculture, and is a regular contributor on Rural Route Radio.

Karolyn Zurn and her family raise corn, soybeans, sugar beats and wheat.  Zurn has served on many agriculture boards including Minnesota Ag in the Classroom, Northern Corps Institute Council, Minnesota Soybean Growers, and Becker County Corn and Soybean Growers. Zurn was most recently was appointed to the Minnesota State FSA Board.

Officers held a planning session in mid-November to set priorities for the coming year. “Our officer team is dedicated to advancing our mission to unite women in ag, communicate among ourselves to develop better leaders and accurate messages, and to promote policies that make sense for the production of food, fiber and renewable fuels and for our consumers,” says Heather Hampton+Knodle.

American Agri-Women (AAW) promotes the welfare of our national security through a safe and reliable food, fiber and energy supply. Since 1974, AAW members have worked together to educate consumers, advocate for agriculture, and offer networking and professional development opportunities. Go to the AAW web site for more information and to join, www.americanagriwomen.org. Find AAW on social media  at: Facebook.com/AgriWomen, Twitter.com/Women4Ag (@Women4Ag) and Instagram.com/americanagriwomen (@americanagriwomen). #women4ag #agriwomen #standupspeakout4ag.