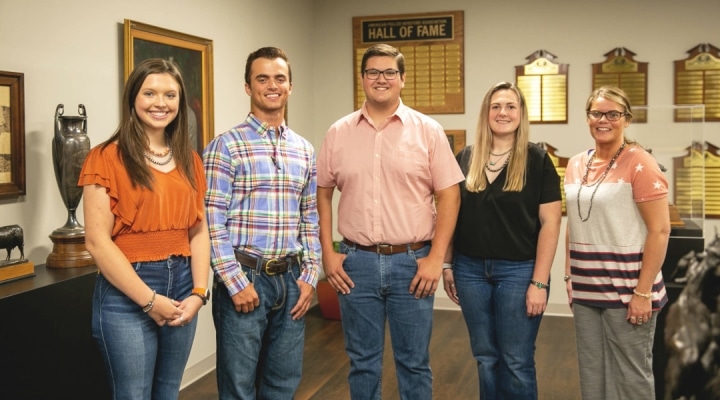 These five individuals are the JNHE Ambassadors and will be joining for the month of July, in a mini-internship focused on all aspects of preparation, follow-through and post-production of event management. (Courtesy Photo)

KANSAS CITY, Mo. — The National Junior Hereford Association (NJHA) is excited to bring an additional five members of staff to assist with the 2022 VitaFerm Junior National Hereford Expo (JNHE) in Louisville, Ky. These five individuals are the JNHE Ambassadors and will be joining for the month of July, in a mini-internship focused on all aspects of preparation, follow-through and post-production of event management.
This team arrived in Kansas City, Mo., on July 6, and will be assisting with JNHE festivities until July 28.

To learn more about the 2022 JNHE Ambassadors, please see their bios below:

Katherine Krauss, Russell, Kan., is finishing her undergraduate degree at Kansas State University (K-State) in animal sciences and industry with a business minor. In the fall, she will start the masters of business administration program at K-State. While at K-State, she has been a member and officer for the Collegiate Cattlemen’s Club, Block & Bridle Club, College of Ag Council, 2020 KSU Meats Judging Team and 2021 KSU National Champion Meat Animal Evaluation Team. Growing up on a purebred Hereford, Angus and commercial cow-calf operation, she has exhibited Hereford cattle on local, state and national levels. Katherine has been highly involved in the NJHA, attending the JNHE, the NJHA Fed-Steer Shootout and received the award for reserve champion hereford steer at the 2017 and 2021 Fed Steer Shootout Programs. She is looking forward to interacting with other Hereford juniors and helping the 2022 JNHE run smoothly while serving on the ambassador team.

Kase LeRow grew up in McGregor, Texas, just outside of Waco. He will begin his junior year at Texas Tech University this fall, majoring in animal science with a minor in finance, after finishing at Blinn College in Brenham, Texas this spring. There he was an active member of the livestock judging team and was fortunate to be named to the 2021-2022 All-American Team. Growing up he was heavily involved in both 4-H and FFA; holding a multitude of officer positions and competing on different teams. When he wasn’t at a judging contest or a livestock show, Kase spent his time working for a preconditioning operation just outside of Lorena, Texas. He has held internship positions at Priest Genetics, Genesource and Poe Livestock Mobility Solutions, and is excited to add being an ambassador for the JNHE to his resume.

Jaclyn Tweeten is from Spring Grove, Minn., and is a Ph.D. student in leadership communications at Kansas State University. Her research interests include understanding youth and adult partnerships, and leadership among youth within the livestock industry.Jaclyn plans to work with the American Hereford Association (AHA) for her research project. Prior to attending K-State, she worked as a 4-H Program Coordinator through Iowa State University Extension and Outreach in Chickasaw county. Jaclyn earned her master’s degree from Iowa State University in agricultural education, and her bachelors in agricultural marketing communications and agricultural business from the University of Wisconsin- River Falls. Jaclyn grew up showing cattle and continues to exhibit at many state, regional and national shows, while continuing to be an active volunteer in the livestock industry. She has served in many leadership roles within 4-H and FFA and is a volunteer in her county’s livestock program as well as the Kansas State Fair Beef Show. She is excited to be working with AHA for her research project and serve as an ambassador to better understand how livestock associations operate internally.

Emerson Tarr, Le Roy, Ill., will be entering her sophomore year at Lake Land College, studying agriculture transfer, and pursuing a degree in agriculture communications. Emerson is a member of the livestock judging team, vice president of the agriculture transfer club and a member of the student ambassador team. Emerson has grown up raising and showing Simmental cattle and has attended various state, regional and national shows. The Simmental breed has brought many leadership opportunities for Emerson, including serving as the Illinois Junior Simmental Association president and recently being elected to the American Junior Simmental Association (AJSA) Board of Trustees. Her favorite part of the AJSA National Classic is the mentor-mentee program, where she helps young exhibitors have a fun and successful junior national experience. Emerson looks forward to expanding her horizons beyond the Simmental breed and is excited to spend the summer with Team Hereford.

Walter Steely, of Sebree, Ky., is a recent graduate of Murray State University where he received his degree in agribusiness economics with an emphasis in marketing and management. His future plans are to continue his education and obtain his master’s of science in agriculture and find a career in either livestock show management or a breed association. Throughout his junior career, Walter exhibited Red Angus cattle across Kentucky and at the national level. In 2016, he had the honor to be on the National 4-H Livestock Skillathon High Overall Team and was an All-American Individual. Over the years, he has served in many leadership roles such as Kentucky 4-H Vice President, Kentucky Junior Cattlemen’s Association Director and student government association vice president of finance at Murray State. Walter looks forward to serving as an ambassador at the JNHE and welcoming everyone to his home state.