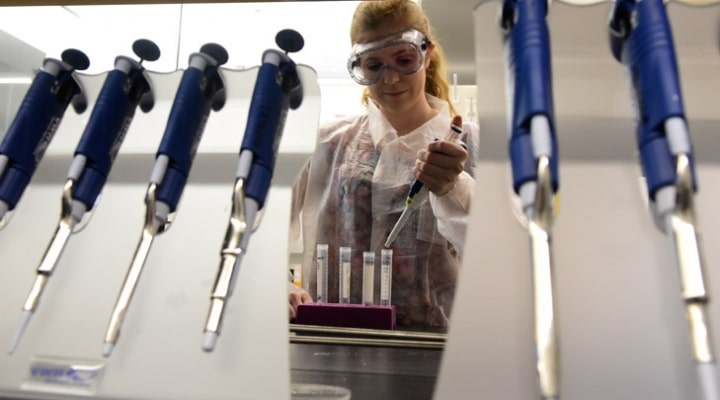 By studying food safety from a pathogenic perspective Brenna Flynn has learned the value of hard work and the meticulous effort it takes to perform such research. (Fresno State)

FRESNO, Calif. — Brenna Flynn fondly recalls baking cookies at her grandmother’s house when she was young, and says she’s always had a sweet tooth. Now, the Fresno State food science and nutrition graduate is shaping a career out of her interest.

A graduate student at Cornell University, Flynn is studying new ways that pathogens can be reduced in milk products.

Even though college didn’t go quite how she initially planned, Flynn’s work has been fully funded through a research grant at one the nation’s top master’s programs.

The path began at San Joaquin Memorial High School in Fresno. After graduation she moved to Colorado to study English at the University of Denver. However, after missing her family and friends, she came back after a year and attended Fresno City College.

She had always been interested in the science field, and when she transferred to Fresno State she was drawn to a food science degree that offered many career possibilities.

The decision on her master’s research focus wasn’t as easy until she arrived at Cornell last August. When she met her faculty adviser, Dr. Samuel Alcaine, he suggested a dairy-related project.

She agreed and quickly immersed herself into learning about and testing enzymatic inhibition on pathogens that can affect raw milk or can be introduced at various points in cheese making. Listeria monocytogenes is a bacterium that she is focused on that can infect humans and animals through contaminated food.

“It’s a big problem in the food production and dairy industries,” Flynn said, “so I’m working with a new enzyme, lactose oxidase, which hasn’t been applied much, and studying how it reacts with listeria.”

By studying food safety from a pathogenic perspective she has also learned the value of hard work and the meticulous effort it takes to perform such research.

That interest was sparked initially in an undergraduate research project with Fresno State Food Science and Nutrition Department chair Dr. Steven Pao that involved cold plasma technology and its effect on controlling microbial growth on fruit.

“Through that project, I discovered that exploring new microbial control methods takes time,” Flynn said, “and there are often obstacles in these research methods.”

A food microbiology class taught by Dr. Erin Dormedy, and an assigned best-selling book, “Poisoned,” served as another catalyst. The author, Jeff Benedict, wrote how the E. Coli outbreak in 1992 and 1993, the biggest food-poisoning epidemic in the U.S., was caused by unsanitary fast food handling practices.

“It had a big impact on me because it went into detail about the people who were severely affected or died,” Flynn said. “I started to understand more about outbreaks, and how important it is to protect our food supply systems through research.”

The Food Science and Nutrition Department quickly became her second home in other ways through club and industry outreach events.

As a senior, she served as a captain for the Fresno State team that competed against other teams from around the state at the Institute of Food Technologists (IFT) College Bowl. The annual event tests students’ knowledge on food-related topics pertaining to science, technology, law, history and other areas.

The 3.98-GPA student also shared her knowledge with her Fresno State peers as a supplemental instructor and hosted review sessions for groups of up to 80 students. She gained valuable teaching experience and loved helping others succeed.

Her busy undergraduate schedule was good preparation for an even busier master’s schedule that includes taking classes, teaching others and performing research, which she treats as a full-time job. This means that she normally spends days, nights and weekends in the lab analyzing samples, as well as time at home writing her graduate manuscript, which she is hoping to eventually publish in the Journal of Dairy Science.

Even though she returned to Fresno in March when the Cornell campus went to virtual instruction because of the COVID-19 pandemic, she has remained busy. She has been writing her first research journal article from her recent research results, and has taken classes in food safety assurance and fermentation.

She hopes to return to Cornell this July and start preparation for a related research project that will shift her focus to the cheese-making process.

As she learns more about food pathogens, she said American consumers has little to worry about.

“The food industry has a lot of protocols to prevent the spread of different pathogens and keep our food supply safe,” Flynn said. “Every food processing facility is held to strict cleanliness standards to prevent spread of contaminants through Hazard Analysis and Critical Control Points (HACCP) plans and the Food Safety and Modernization Act (FSMA).”

After Cornell, Flynn hopes to work in the industry a few years before possibly pursuing a doctoral degree. She has been looking into becoming a certified HACCP food safety instructor or a food processing facility supervisor.

Even though Ithaca, New York (where Cornell is located) and Fresno are on opposite ends of the country, she is surprised by how familiar many of her East Coast counterparts are with her hometown.

“When I tell people where I’m from,” Flynn said, “they get excited because of the Central Valley’s reputation in the dairy industry and food processing. I didn’t have any experience with the dairy industry beforehand, but I’ve really grown to love it.”

Share your farm's adaptations to COVID-19, enter to win $200