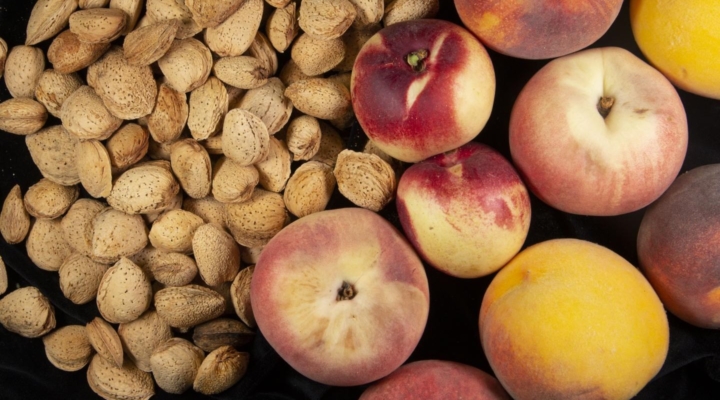 BARCELONA — The almond tree and the peach tree are two well-known species, since human beings have been eating their fruit (peach) or seed (almond) for thousands of years. Although at first sight the products of these trees may seem to be very different, both species are part of the Prunus genus and are genetically very similar, so much so that they can be crossed and fertile hybrids can be obtained from them. Now, an international team led by researchers of the Centre for Research in Agricultural Genomics (CRAG) has sequenced the genome of one almond tree variety and compared it to the peach tree genome. The detailed comparison of both genomes provides insights into their evolutionary history and reveals the key role played by the genome’s mobile elements (also known as transposable elements, or transposons) in the diversification of both species. According to the authors of the paper, the movement of the transposons could lie at the origin of the differences between the fruit of both species or the flavour of the almond.

The knowledge of the almond tree’s genome will be a very important tool in the improvement of the species. “For example, this information will enable us to look for more productive and more disease-resistant varieties and also rule out those that bear bitter almonds more easily,” explains Pere Arús, an IRTA researcher at CRAG. Arús led the study that is now published in The Plant Journal, and also took part in the international consortium that ultimately sequenced the peach tree genome in 2013.

A common ancestor in the centre of Asia

The comparison of the genome of the ‘Texas’ almond tree variety ? the sequencing of which involved the team of Tyler Alioto of the Centro Nacional de Análisis Genòmico (CNAG-CRG), part of the Centre for Genomic Regulation (CRG) ? and the peach tree genome places the divergence of both species six million years in the past. The results are consistent with the existing hypothesis that places the existence of a common ancestor of these Prunus species in the centre of Asia and the subsequent separation of both populations that was brought about when the Himalayas massif was lifted. This geological phenomenon would have left both populations of Prunus exposed to totally different climates in which both species would evolve: the almond tree in the arid steppe of the centre and west of Asia and the peach tree in the subtropical climates of the East, in the area that is now South China.

The authors of the paper found, as was to be expected, that the genomes of the almond tree and the peach tree have a high degree of conservation, and they investigated the extent of the differences between them and whether they could be accounted for by the action of the transposons.

Transposons are pieces of DNA with the capacity to change position within a genome and proliferate, jumping from one chromosome to another, and taking up a major part of the genome. In this transposition process, these mobile genetic elements may create mutations or change the genome’s local properties, thus affecting gene regulation. There has been a great deal of discussion regarding the utility of these mobile genetic elements since Barbara McClinktock predicted their existence almost 70 years ago and for which she received the Nobel Prize in Medicine and Physiology in 1983.

The results of the analysis of the almond tree and peach tree genomes show that approximately 37% of their genome is comprised of mobile elements and that some of the genes that play a key role in the differentiation of both species are affected by the presence of these elements. “In this study, we discovered that the recent history of the transposons of the almond tree and the peach tree could lie at the basis of many of the important differences between both species,” explains Josep M. Casacuberta, a CSIC investigator at CRAG expert in mobile genetic elements and study co-leader. “Although increasingly more studies have demonstrated the key role of the mobile elements in evolution, the comparison of the almond tree and the peach tree, both species with distinct characteristics but with very closely-related genomes, provides unique insights into the impact of the transposons on the initial steps in the separation of the species”, continuous Casacuberta.

Key in the eradication of bitter almonds

Most of the Prunus species have a bitter and toxic seed, although there is a group of almond tree varieties that bear a sweet almond, an aspect that has been key in their domestication and their agricultural and economic interest. Previous studies identified certain genes involved in the synthesis of the compound that confers bitterness and toxicity upon these seeds: amygdalin. Now, the CRAG team has discovered that in sweet almond tree crops at least one of these genes involved in the synthesis of amygdalin is affected by transposon insertions, suggesting a key role not only in the diversification of the almond tree and the peach tree, but also in variations within the same species (bitter almond and sweet almond).

About the Centre for Research in Agricultural Genomics (CRAG)

The Centre for Research in Agricultural Genomics (CRAG) is a centre that forms part of the CERCA system of research centers of the Government of Catalonia, and which was established as a partnership of four institutions: the Spanish National Research Council (CSIC), the Institute for Agri-Food Research and Technology (IRTA), the Autonomous University of Barcelona (UAB) and the University of Barcelona (UB). CRAG’s research spans from basic research in plant and farm animal molecular biology, to applications of molecular approaches for breeding of species important for agriculture and food production in close collaboration with industry. CRAG has been recognized as “Centro de Excelencia Severo Ochoa 2016-2019” by the Spanish Ministry of Economy and Competitiveness.

–Centre for Research in Agricultural Genomics (CRAG)
via EurekAlert!