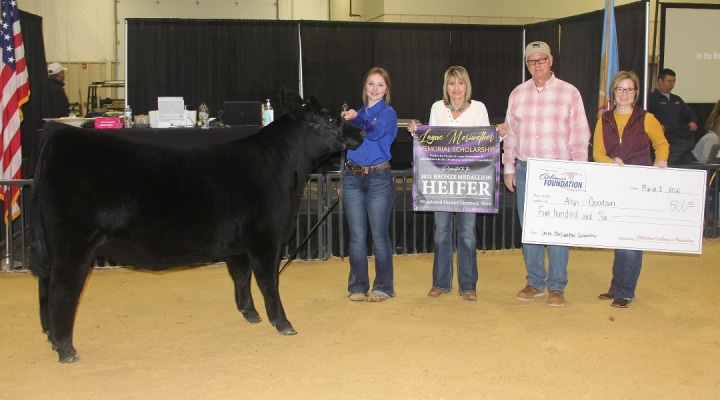 Michael and Kelly Meriwether present Allyn Goodson with a $500 scholarship honoring their son, Layne Meriwether who was an avid cattle enthusiast. Assisting the Meriwethers with the check presentation is Chancey Hanson representing the Oklahoma Cattlemen’s Foundation. (Courtesy Photo)

OKLAHOMA CITY — The family of Layne Meriwether presented Allyn Goodson with a $500 Bronze Medallion Heifer scholarship in memory of Layne Meriwether, presented at the conclusion of the Heifer Show at the 2021 Woodward District Livestock Show. Goodson represents the Shattuck FFA Chapter and has shown cattle for seven years. Her heifer was selected as Champion Angus Heifer before being named the 2021 Bronze Medallion Heifer.

“The Meriwether Family would like to thank all those that contributed to Layne’s Memorial Fund that was set up through the Oklahoma Cattlemen’s Foundation,” said Michael Meriwether.  “We have chosen to recognize students that show cattle at the North “Best” District show. (That is how Layne always referred to the Woodward District Show). Showing cattle and improving his herd were things that Layne was passionate about. We are so grateful to everyone that made it possible to honor Layne in this way through this scholarship.”

This award will be given annually to the Bronze Medallion Heifer Exhibitor at the Woodward District Livestock Show. More than $12,000 was contributed to the Layne Meriwether Memorial Fund after Layne’s passing, allowing the scholarship to be endowed and be presented annually. The Layne Meriwether Memorial Scholarship is administered by the Oklahoma Cattlemen’s Foundation, the charitable arm of the Oklahoma Cattlemen’s Association.