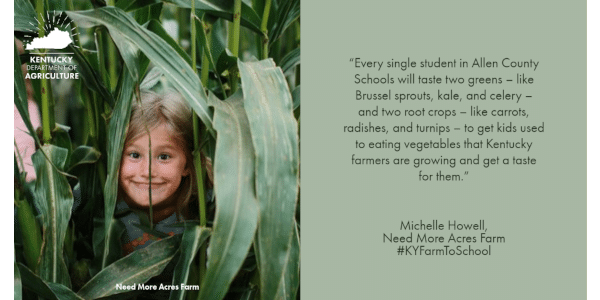 At the end of Dr. Seuss' classic children's book "Green Eggs and Ham," Sam convinces a closed-minded eater to try the title dish, which he continuously rejected throughout the book without tasting. Need More Acres Farm in Allen County is playing the role of Sam in the county’s public schools. (https://www.facebook.com/kentuckyag/photos/a.10151328691058520/10158893348998520/)

FRANKFORT, Ky. — At the end of Dr. Seuss’ classic children’s book “Green Eggs and Ham,” Sam convinces a closed-minded eater to try the title dish, which he continuously rejected throughout the book without tasting.

After tasting green eggs and ham, the picky eater discovers he actually likes them and thanks Sam for encouraging him to try the dish.

Need More Acres Farm in Allen County is playing the role of Sam in the county’s public schools. Students taste test 100 types of vegetables and greens grown on the local 20-acre vegetable farm.

“Every single student in Allen County Schools will taste two greens – like Brussel sprouts, kale, and celery – and two root crops – like carrots, radishes, and turnips – to get kids used to eating vegetables that Kentucky farmers are growing and get a taste for them,” said Michelle Howell, who co-owns and operates the farm with her husband, Nathan.

“They are more likely to try food in the classroom than they are in the cafeteria,” she added. “They watch a video of the farm, and they get an educational sheet with nutrition information on what they are eating. We try to make it really fun.”

“Need More Acres Farm is committed to ensuring that their farm to school efforts carry long-term benefits and habit changes for the students they serve,” the U.S. Department of Agriculture wrote in news release when the farm received one of its farm to school grants this year for $93,929.

The funding helps the farm continue taste testing, as well as other unique educational projects, which the USDA calls “Farming, Culinary Arts, and Community Organizing Co-op for High Schoolers.”

“For the last eight years, all high school freshmen in Allen County have come out to the farm every year to learn about farming and culinary arts,” Howell said. “They learn how to farm, process, and package the food, and go out in the community. One group worked at a farmers’ market. Once a month, they provide fresh produce boxes for elderly people, picking the food and boxing it up for them.”

The co-op allows high school students to get school credit by working on the farm.

“The kids see the co-op as a great resume builder,” Howell said. “Some of our past co-op students said, ‘I got that job or got into that college because I worked on a farm.’ They were told: ‘I know if you worked on a farm, you worked hard.’”

Allen County has a program called Grade Recovery. “If a kid is not a great test taker, they can come out to farm, work, and get points put back on their grades,” Howell noted.

The farm sells watermelons to cafeterias in Allen County Schools and vegetables to the high school’s culinary arts program.

While the COVID pandemic was tough on many farms that rely on direct sales, it “provided one of the biggest wins” for the farm to school movement, according to Howell.

“Allen County Schools was already looking for fresh food at the beginning of the pandemic,” she said. “We work with a lot of other farmers, and one was growing beautiful carrots for a restaurant in Nashville. When the restaurant was shut down, it provided those carrots to the school kids as a snack.

“The school needed farmers, which is what we have been preaching for a long time. The moment had finally arrived that proved the importance of it.”

Need More Acres Farm also received one of the Kentucky Department of Agriculture’s 2018 Farm to School mini grants for $7,000. It helped the farm host field trips for every elementary school student in Bowling Green Independent Schools – about 2,000 kids.This is the third year for the field trips, which were canceled last year because of the pandemic.

“Our goal is not for the kids just to eat local food but learn that farming would be a good occupation for them,” Howell said.

Howell’s relationship with Bowling Green public schools began in 2009, when the farm started selling watermelons to the schools’ cafeterias. The schools have since expanded their purchases to cucumbers, squash, zucchini, cauliflower, and broccoli all year round, thanks to the farm’s eight high tunnel greenhouses.

“We grow as much in the winter as in the summer,” she said. “If you can grow it in Kentucky, we’re growing it here.”

Howell offered advice to other Kentucky farms that would like to start selling fresh produce directly to schools.

“Growing watermelons is a great starter,” she said. “School systems can pay a really good price for them, and they prefer seeded watermelons, which are easier to grow.

“Watermelons are not as perishable as other types of fruit, and kids love them, which makes the food service staff excited.”