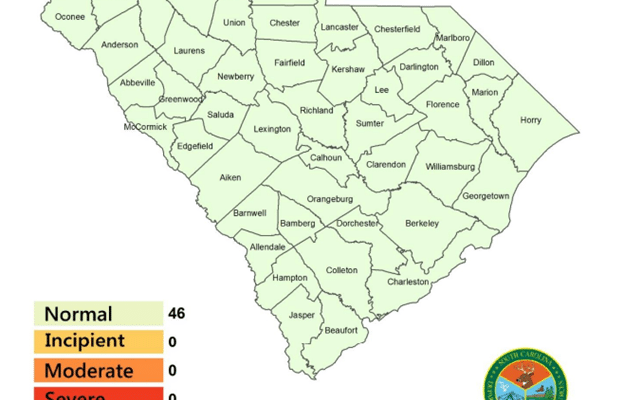 The S.C. Drought Response Committee met Tuesday, Feb. 1, via conference call to update the drought status of all counties in South Carolina and voted to declare the entire state drought free.

COLUMBIA, S.C. — The S.C. Drought Response Committee met Tuesday, Feb. 1, via conference call to update the drought status of all counties in South Carolina and voted to declare the entire state drought free.

Due to average to above-average rainfall totals during December and January, the Committee removed the incipient drought status of 34 counties. The Committee issued the incipient drought designation in December primarily over a concern for wildfires, but the wildfire threat has diminished over the past 30 days according to the S.C. Forestry Commission. The Forestry Commission responded to 72 wildfires since the start of the year, which is 50 percent fewer than the 10-year average. Leslie Woodham, Forestry Commission fire staff officer, emphasized that while the number of wildfires have been lower than normal, the National Interagency Wildfire Center is forecasting greater-than-usual wildland fire potential over the next three months due to the ongoing La Nina.

According to South Carolina State Climatologist Hope Mizzell, portions of the state have received 90 percent to 150 percent of normal rainfall (7 to 15 inches) over the last 60 days, especially the counties in the central Savannah region and Midlands. Areas along the immediate coast have been the driest, but their rainfall totals during fall leading into winter were above normal. There was less consensus in the drought indicators for removing the drought for some counties in the Pee Dee Basin and Catawba-Wateree Basin, but the Committee decided to downgrade due to low wildfire activity, improved streamflow levels, normal lake levels and taking into consideration that during winter there is less demand on the state’s water resources.

Priyanka More, S.C. Department of Natural Resources (SCDNR) hydrologist, provided an update of the hydrologic conditions showing that although a couple of streamflow gauges in the Catawba-Wateree basin, Greenville, and Pickens County still show dry conditions, the recent rainfall and snowfall have improved streamflows in most of the state. The lake levels for the major reservoirs in the state are maintained close to normal. The groundwater levels are also at or above-normal status. The current and the forecasted cooler temperatures along with reduced evapotranspiration should continue to help the overall streamflows in the state.

The South Carolina Drought Response Committee will continue to monitor conditions, and since some counties are still teetering on the edge of drought, another call may be needed in early March.