Home » All Michigan IPA kicks off the official start of fall 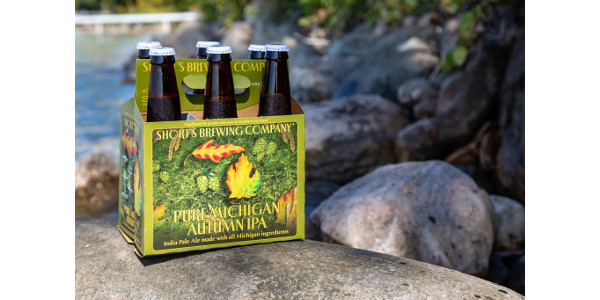 LANSING, Mich. (PRNewswire) — To commemorate the first official day of fall and inspire travel during the season, Pure Michigan and Short’s Brewing Company have teamed up to create Pure Michigan Autumn IPA, a first-of-its-kind IPA that highlights the state’s agricultural bounty and nationally-recognized craft beer industry.

“Fall is a special time in Michigan, as the fall colors provide a great setting for scenic drives, hikes and tasting tours whether that be donuts and apples or wine and brews,” said Dave Lorenz, vice president of Travel Michigan, part of the Michigan Economic Development Corporation. “With their taproom in Bellaire, Michigan, and passion for local flavors, Short’s has been a pioneer in Michigan’s evolution as a craft beer destination, making them the ideal partner for a Pure Michigan-themed beer to toast the fall season.”

“This beer was designed to celebrate the craft beer industry and suppliers in Michigan,” said Joe Short, founder of Short’s Brewing Company. “We are lucky to have several great hop farmers, maltsters, and yeast suppliers close to home. Pure Michigan Autumn IPA pays homage to them and their products, and our brewery staff, and what great flavors can come when we work together. We hope this beer captures what fall feels like in Michigan.”

Pure Michigan Autumn IPA will first be available at Short’s Pub, in Bellaire, Michigan, on Oct. 4, and on Oct. 5 it will be featured alongside several other Short’s Brewing Company craft beers at the second annual Chicago Rare and Wild Beer Fest. Other notable Michigan breweries in attendance includes Bell’s Brewery and Jolly Pumpkin Artisan Ales. The beer will also be available at the Detroit Fall Beer Festival, at Eastern Market, on Oct. 25-26 and Short’s events in Michigan throughout October including Oct. 10 at 7 Monks in Grand Rapids, Oct. 14 at 7 Monks in Traverse City, Oct. 24 at Café One 3 in Kawkawlin, Oct. 29 at Clubhouse BFD in Rochester Hills and Oct. 30 at Session Room in Ann Arbor.

Beginning on Oct. 6, a multi-week distribution cycle will begin across Michigan, with Pure Michigan Autumn IPA being available at Meijer, Busch’s, D&W Fresh Market, VG’s Food Center and Kroger Marketplace, along with many independent retailers and 50 taprooms. An interactive map, highlighting all locations where to find and purchase the beer will be available on Oct. 4, at shortsbrewing.com and michigan.org.

Pure Michigan and Short’s Brewing Company remind those 21 and over to drink responsibly.

About Michigan Economic Development Corporation (MEDC)The Michigan Economic Development Corporation is the state’s marketing arm and lead advocate for business development, job awareness and community development with the focus on growing Michigan’s economy. For more information on the MEDC and our initiatives, visit www.MichiganBusiness.org. For Pure Michigan® tourism information, your trip begins at www.michigan.org. Join the conversation on: Facebook  Instagram  LinkedIn, and Twitter.

ABOUT SHORT’S BREWING COMPANYLocated in the heart of Downtown Bellaire, MI, Short’s Brewing Co. was established in 2004 by Joe Short.  In 2009, Short’s began keg and bottle distribution in Michigan via their Elk Rapids Production Facility. Starcut Ciders is a division of Short’s Brewing Company born out of a desire to celebrate the bounty of Michigan orchards. The brewery is known widely for their flagship and experimental brews including Huma Lupa Licious and Soft Parade. Short’s prides themselves on producing fearlessly creative beers, handmade by people who care in Northern Michigan.