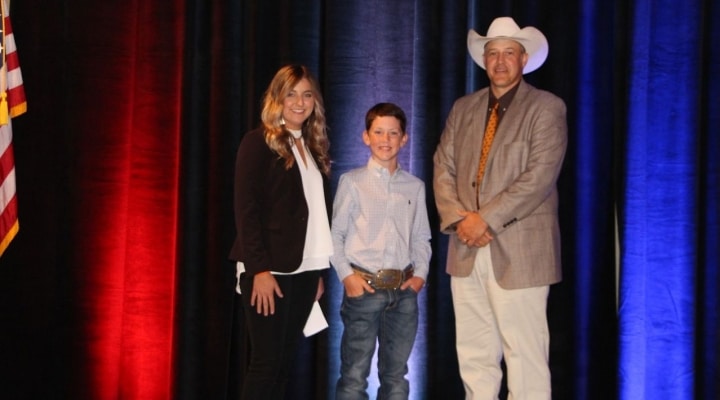 All-Around Junior Cattleman is the most prestigious award that the Oklahoma Junior Cattlemen’s Association awards annually. Members earn points for participating in the speech, star and sales contests; and by placing in the Top Ten Triple Crown Heifers, Steers and the top ten of the steer feedout contest.

Kelton is the 12-year-old son of Jerrod and Blayne Arthur and the older brother to Kennedy. He started showing cattle at the age of 8 and has been fortunate to find success in the show ring. He has had several breed champions at the Oklahoma Youth Expo, has shown the Supreme Heifer at the Tulsa State Fair two years in a row. He has exhibited Charolais Heifers across the nation exhibiting the National Champion Charolais Female twice and has had breed champions at the North American International Livestock Exposition and at the National Western Stock Show in Denver. This past January he showed his first market steer at the National Western where he made the premium auction and was named the Junior Premier Exhibitor. One of his fondest achievements is being selected as the Supreme Female over all breeds at the American Royal in 2018 with his Charolais heifer. Making this the first time for an Oklahoman to win this honor and the first time for a Charolais heifer to win the honor.

Kelton’s family operates Lucky Strike Show Cattle in Stillwater. Kelton is a student at Ripley elementary and will enter the 7th grade this fall. Kelton serves as the Ripley 4-H President, plays the percussion in band and was on the Superintendent’s Honor Roll both semesters of his 6th grade year. He enjoys participating in the Oklahoma Junior Cattlemen’s Association activities such as speech, salesmanship and livestock judging competitions in addition to exhibiting cattle.

Kelton looks forward to the continued opportunity to show cattle and has started a small herd of his own. He continues to learn about genetic selection and breed characteristics with the hopes of raising future
show ring champions.

Kelton will be receiving a custom belt buckle for his achievement.

The OJCA was started in 1985 to further the education and cooperation of young people interested in cattle, and to aid in the attainment of mutual goals set by OJCA members interested in all phases of their business and possible career and leadership opportunities. For more information about OJCA membership or activities call 405-235-4391 or visit www.okcattlemen.org.

Dairy farmer prices should be based upon cost of production