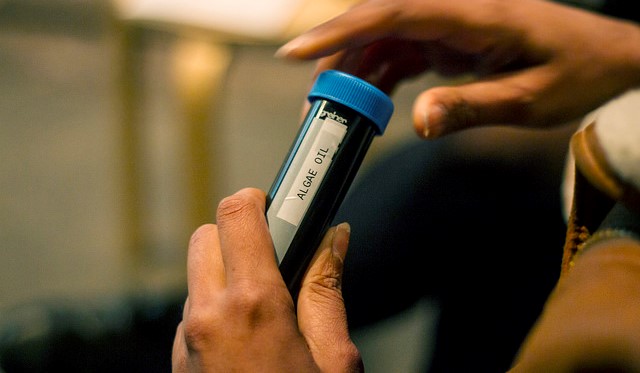 IMPERIAL, Texas (AP) — Inside a high-tech lab in a modular building in the West Texas desert here, a young scientist peered through a microscope at a slide of live and multiplying algae. The San Antonio Express-News reported that she was on the prowl for “grazers,” a sort of cellular-level locust that could wreak havoc on the multimillion-dollar crop proliferating in thick green ponds outside.

It’s the equivalent of a cotton farmer walking rows in search of disease-carrying bolls, explained Rebecca White, the 38-year-old microbiologist who runs one of the world’s few commercially viable algae farms.

The harvest? For now, kilos upon kilos of biomass that is a plant-based source of omega-3 fatty acids, which in recent years have become all the rage for lowering cholesterol, promoting healthier skin and promising other health benefits. Common practice has been to consume them via a hunk of salmon or supplements derived from fish or krill. But since fish and krill actually get their omega-3 from algae, White and her team have figured out how to cut out the “middle fish” and capitalize on cultivating the source.

In a sign of how commonplace the practice has become, White, whose family has for generations raised cotton and cattle in the Texas Panhandle, says her grandfather has begrudgingly acknowledged that domesticating aquatic microorganisms counts as real farming.

The farm in Imperial is owned by Houston-based Qualitas Health, which partnered with H-E-B for the alGeepa line of supplements and is now expanding into the $33 billion omega-3 market with iWi. The latter line rolled out at Amazon.com, the Vitamin Shoppe and Sprouts Farmers Market, as well as in H-E-B, in June.

“But that is just the very beginning, that is just one of our verticals,” said Spanish entrepreneur Miguel Calatayud, who is Qualitas’ CEO. “What we are really excited about is the food thing, the protein. Our protein has all the essential amino acids, so it’s better than beef. It is the best vegan protein we’ve ever seen.”

Calatayud has been in the food business for 20 years and at one point grew more than 700 million pounds of vegetables at sites around the world. Smoothie fans in South Texas may know the line of frozen “Blendables” he developed for H-E-B. He’s convinced high-protein snacks derived from algae will be his next big thing.

It will be a challenge. The United Nations in 1974 called algae “the most ideal food for mankind,” and the Food and Agriculture Organization declared it “the best food for tomorrow.” But so far not even NASA’s been able to get people to want to eat it. At least, not the average American.

With more people eschewing certain foods and a world population expected to approach 10 billion by 2050, however, a new generation of scientists says the mainstreaming of algae is inevitable.

“Most people’s experiences with algae are a contamination event of some sort,” White said. “Your pool, the dog bowl, the Great Lakes, your swimming hole — that’s all negative. But algae has been doing so many positive things for so many years that they don’t talk about in a way that gets people’s attention. … Our goal is to make people think about algae as food.”

Researchers have been studying algae’s potential for decades, of late thanks to billions of dollars in public and private investment into turning its high-lipid concentrations into a renewable energy source.

White, who earned her doctorate at Texas A&M University, started out in that realm, working in a southern New Mexico algae farm owned by Sapphire Energy. Sapphire’s efforts flopped, as have similar biofuel forays around the world.

“It was kind of a fool’s errand,” said Robert Henrickson, CEO of Smart Microfarms and founder of California-based Earthrise, which together with its Japanese partner’s farm in China is the world’s leading producer of spirulina algae used largely as a blue-toned food coloring.

“They couldn’t even get close on the cost,” Henrickson said. “It would have to be to be competitive with fossils or solar. So a lot of those companies either failed or tried to pivot to what is already a great business for algae, which is high-value products like food, nutraceuticals, proteins.”

Green Stream Farms bought out Sapphire’s farm in Columbus, New Mexico, and is now partnering with Qualitas as the main production hub for iWi (pronounced ee-wee). The Imperial facility is a former shrimp farm with a couple of working oil pump jacks.

Its arid climate and access to a brackish water aquifer make the otherwise barren land ideal for algae farming.

The research takes place in Imperial, and the algae for the H-E-B line is produced there to maintain its “Go Texan” label.

The recipe is simple: Sun, salty water, seed bio-prospected from the ocean and fertilizer. Paddles churn the water so there are no algae at the bottom being consistently starved of sunlight.

Unlike terrestrial crops that generally produce one plant per seed, the water-based algae have volumetric scaling. You grow some in a small amount of water until it reaches a certain density, then put it into successively larger amounts of water and continue building up that way. There’s a new crop every day, and summer growth is so fast each pond is typically harvested three times a week.

A strain that starts in a beaker can eventually produce between 10,000 and 15,000 kilos of biomass per acre a year.

White monitors ponds for color, favoring a bright Kelly green to deep forest green. She gives newcomers paint swatches for reference. A muddy, brownish green means something isn’t optimal. The effect of high air temperature can be played with by deepening ponds or speeding water flow to increase the cooling effect of evaporation. But if a strain can’t handle the region’s intense sunlight, that farm is done with that strain.

Rain would dilute all the hard work, hence aquaculture in the desert.

“We’re the only type of farmer that doesn’t like rain,” White said.

Qualitas is growing a genus of algae called nannochloropsis, targeting each of omega-3’s two essential long chain polyunsaturated fatty acids. The better known is DHA (docosahexaenoic acid), said to benefit brain structure and function and found in infant formula, baby food and prenatal vitamins. The other is EPA (eicosapentaenoic acid), touted as a powerful anti-inflammatory that is good for cardiac health, joint health, mood and a lot of other things.

There are other marketing points. Algae-sourced omegas are available without tapping already overfished marine ecosystems. People with shellfish allergies or dietary restrictions on animal products have a new way to get the vital nutrient.

There’s also related economic development in Imperial, as the farm scales up to a planned 150 to 200 acres of ponds from its current 50 acres. Two new food trucks, one by started by a Qualitas cleaning lady, have sprouted up near the property because there wasn’t anywhere nearby for Qualitas staff and visitors to buy lunch.

She called iWi “an emerging brand” in the field.

“Algae can tout plant-based, vegan and omega-3 marketing, as well as being a sustainable ingredient,” she said in an email. “As a protein source, it may gain more appeal as consumers continue to explore the non-animal-derived protein landscape.”

Her research showed algae popping up all over grocery stores — salad dressings and plant-based creams and creamers in the refrigerator section and as ingredient boosts for shelf-stable baby food, chocolate candy and instant coffee.

Marketers are now pushing spirulina as a protein source for powders as well as in juices and wellness bars, she said. But while strong, spirulina’s growth rate has been declining, while algae products highlighting omega-3 or DHA are growing.

The close-knit global algae world is rooting for Qualitas’ success.

“There’s very few people in the U.S. that can raise their hands and say they’ve grown acres of algae,” said John McGowen, director of operations at Arizona State University’s Center for Algae Technology and Innovation, which has conducted Department of Energy-funded research into algal biofuels as well as studies of how algae can be used to draw the last bits of nitrogen and phosphorous out of treated wastewater.

“They’ve got a really nice long history of just kind of slogging it out over the last few years, of driving the production costs down, getting to scale and generating products that are attractive in the marketplace within the U.S.,” he said. “What they’re doing isn’t novel per se, but they’ve done their due diligence and done the hard work of creating an algae farming mindset.”

“You can find a lot more of these sorts of products, algae-based nutraceuticals and different food products in Europe and in particular the Far East, but it’s starting to break through here,” he added. “And with the iWi brand in particular, they’ve got some good slick marketing coming out.”

For algae scientists like White, it’s part of a quest to do something big.

“I would say that I’m very much new-generation algae,” she said. “There’s definitely a difference in vision about how to execute getting algae into people’s everyday lives between people who are my age and the people who have been doing it for 30 years.”

“Algae is the story in some aspects but it’s not the headline,” she said. “This is about reinventing how we feed people, it’s about extending resources. … But I also understand that that’s not for everyone. You can’t just assume that people are going to want it. It’s got to taste good.”

This is an AP Weekend Member Exchange shared by the San Antonio Express-News.