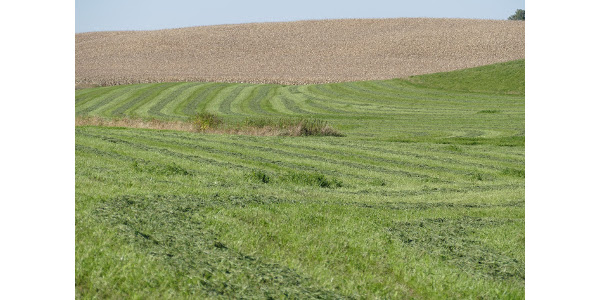 The data show no difference between spring alfalfa stands that received a fall K application and those that did not. This contrasts with older information and common knowledge prevalent today. (Image credit: Paul McDivitt/University of Minnesota Extension)

MINNEAPOLIS — Alfalfa growers in Minnesota typically apply potassium (K) fertilizer twice each year: once during the growing season and once in the fall to promote overwintering. However, recent research by the University of Minnesota indicates that a second, fall K application has no effect on alfalfa’s winter hardiness.

The data show no difference between spring alfalfa stands that received a fall K application and those that did not. This contrasts with older information and common knowledge prevalent today.

The researchers attribute their findings to two likely factors:

They recommend testing soils and applying potash once during the growing season at recommended rates.

Potassium is thought to help plants such as alfalfa resist diseases and aid in overwintering in cold environments, according to Craig Sheaffer, a professor in the Department of Agronomy and Plant Genetics and lead researcher on the study.

Another reason to avoid fall K application is the greater potential for loss via leaching in sandy soils and surface runoff on other soil types.

“With the current economic situation, nobody wants to spend money on fertilizer and lose it to leaching and runoff,” says Dan Kaiser, Extension soil fertility specialist, who participated in the research.

Sheaffer and Kaiser do not recommend K application based solely on crop removal or fertilizing with a goal of maintaining soil K tests above current critical levels (160-200 ppm). This can result in over-fertilization.

Potassium can be taken up by plants in excess, so applying more potassium fertilizer than the crop needs will result in “luxury uptake,” nutrient removal from the soil without increasing yields.

“You can’t ‘bank’ potassium, so overapplying means a lower return on investment,” Kaiser says. And feeding lactating dairy cows forage with K concentrations greater than 2% can predispose some cows to milk fever, a disease that causes weakness and sometimes death.

The research was conducted at four locations in Minnesota from 2011 to 2014, which included some severely cold winters. The four sites were located near Becker, Rosemount, Lake City, and St. Martin. They experimented with five rates of K fertilizer and compared yield, nutritive value, and K tissue concentration, as well as soil K test values.

The study was funded by Minnesota’s Agricultural Fertilizer Research and Education Council (AFREC) and the Midwest Forage Association. It was published in the Agronomy Journal (paywall) and is available on the AFREC website.

Learn more about alfalfa and potassium in this recent Minnesota Crop News post.

A version of this article was originally published by The Farmer online on October 29, 2019, and will appear in the December 2019 print issue of The Farmer magazine.