Home / Florida / AI to improve plant breeding at Gulf Coast Research and Education Center
A new user experience is coming! We'll be asking you to login to your Morning Ag Clips account March 1st to access these new features.
We can't wait to share them with you! Read more here. 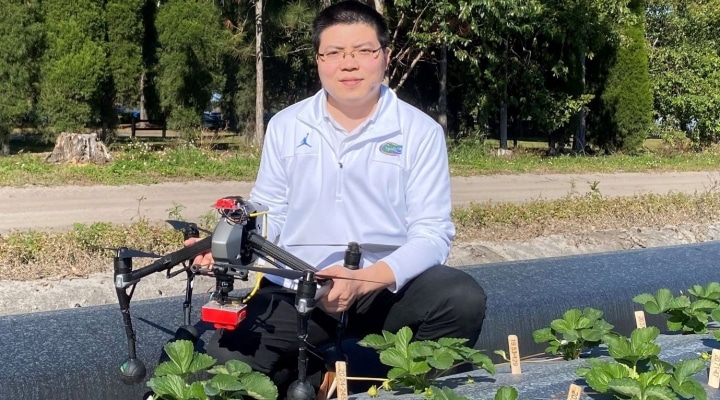 BALM, Fla. — Kevin Wang trained as an engineer and gave little thought to agriculture. But then, life took a few turns.

Born in Tianjin, China, Wang was raised in an urban area and went to the China Agricultural University in Beijing. He lived in Beijing for seven years.

In college, Wang learned to be a software engineer. He earned his bachelor’s and master’s degrees and never seriously considered studying abroad. But a summer camp at the University of California, Davis, in 2007 changed his mind. Through that experience, he challenged himself to work harder and make life changes.

“That brought me to the beginning of my life in the wild Midwest,” he said of his move to Manhattan, Kansas, home of Kansas State University. Still, his transition from the big city in China to a small town in the breadbasket of America proved challenging.

“You can imagine a guy who has been sitting in front of a computer screen and doing computer programming in an air-conditioned office suddenly has to drive a pickup truck to an unattended forest to deploy sensors in creeks to monitor sediment concentration levels — sometimes with an animal beside him,” Wang said. “That was totally out of my box at the beginning. That was, until I read a sentence in a photo that hung in our department office. It gave me relief. It was something like, ‘We ag engineers are prone to make our hands dirty.’ ”

When Wang joined the American Society of Agricultural and Biological Engineers robotics competition, he gradually realized how much of a difference an engineer could make in agriculture.

“It is much harder than I thought it would be to apply some widely used technologies in agriculture than in other areas,” Wang said. “Perhaps that can explain why you don’t see as many autonomously driven tractors as Tesla’s autonomous cars. So as ag engineers, we face more challenges, but we have to solve those to benefit farmers and agriculture.”

Wang started at the UF/IFAS Gulf Coast Research and Education Center on October 1. He joined UF/IFAS because of the university’s vision of becoming an international leader in AI research and applications.

“That vision matches my research at the intersection of plant breeding, ag engineering and computer science. The diversity of specialty crops in Florida also attracts me as I could see a wider research space,” he said.

Now that Wang works for UF/IFAS, he plans to use artificial intelligence to help the center’s scientists develop new varieties of tomatoes, strawberries, ornamental plants and other specialty crops with more efficiency and precision.

He’s already using ground and aerial images (via unmanned aerial systems, or drones) to help plant breeders zero in on the phenotypes – or visible characteristics — they seek. Through phenotypes, plant breeders can select desirable traits and ultimately provide growers with new plant varieties. He plans to use UF’s HiPerGator, the largest university-based supercomputer in the world, to augment his research. Analysis results from HiPerGator could indicate which phenotypic data will help develop the best plant cultivars with the most efficiency.

Another agricultural engineer and AI expert is expected to start at the Gulf Coast REC soon. The two hires at GCREC and the center’s plan to establish a Center for Applied Artificial Intelligence in Agriculture in Balm are part of a UF/IFAS-wide push to become the Silicon Valley of agri-tech research, said Scott Angle, UF senior vice president of agriculture and natural resources and leader of UF/IFAS. Indeed, AI has often been referred to as the fourth agricultural revolution.

About AI at UF

The University of Florida is making artificial intelligence the centerpiece of a major, long-term initiative that combines world-class research infrastructure, cutting-edge research and a transformational approach to curriculum. UF is home to the most powerful, university-owned supercomputer in the nation, according to rankings just released by TOP500, contributing to innovative research and education opportunities.