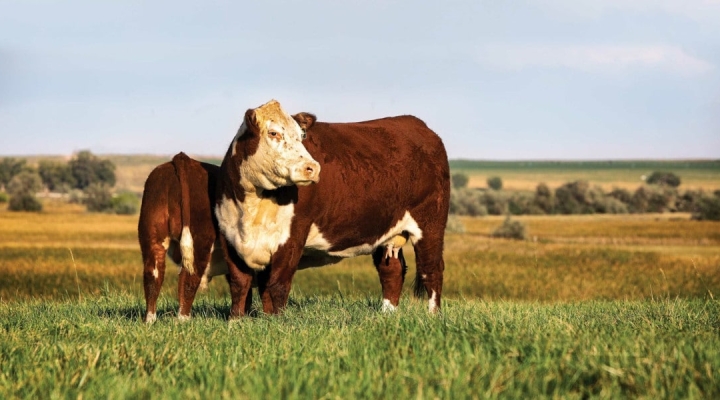 “We know genetic improvement of our industry is driven by gains made in the seedstock sector. One only needs to look at changes in carcass meat yield and quality over the last two decades to realize the potential for improvements in seedstock genetics to transform the entire beef industry,” says Mark Enns, PhD, a beef cattle geneticist at CSU and a key member of the research team. (Courtesy Photo)

KANSAS CITY, Mo. — “As individual cattle producers and as the collective beef industry, we will continue to be asked to do more with less, as it relates to environmental and economic sustainability,” says Jack Ward, executive vice president of the American Hereford Association (AHA). “That’s why we’re excited to begin this cooperative research agreement with Colorado State University (CSU). It leverages decades of AHA research and data collected by AHA members aimed at characterizing genetics associated with production efficiency, which plays a key role in environmental and economic sustainability.”

Methane emission, as a genetic trait in cattle, appears to be moderately heritable with genetic correlations (modest to strong) to economically relevant production traits, such as measures of growth, dry matter intake and various estimates of feed efficiency. Direct emissions from the animal agriculture sector accounts for 3.8% of U.S. greenhouse gas (GHG) emissions, according to the nation’s Environmental Protection Agency. Enteric methane accounts for approximately 27% of methane emissions in the U.S. Worldwide attention is also focusing more intently on nitrogen — a byproduct of rumen fermentation. Previous research suggests genetics play a significant role in nitrogen excretion by cattle, and when selected for, an individual animal’s environmental footprint can be reduced.

“We know genetic improvement of our industry is driven by gains made in the seedstock sector. One only needs to look at changes in carcass meat yield and quality over the last two decades to realize the potential for improvements in seedstock genetics to transform the entire beef industry,” says Mark Enns, PhD, a beef cattle geneticist at CSU and a key member of the research team.

“Often, we hear criticism leveled at the beef industry regarding greenhouse gas emissions and the impact of cattle on the environment, but with little context,” Enns says. “Cattle also sequester carbon and contribute to environmental health. This project will contribute to the beef cattle industry’s goal of demonstrating carbon neutrality by 2040*.” Given the Hereford breed’s inherent genetic advantages associated with production efficiency, documented by the U.S. Meat Animal Research Center, Ward says documenting the relationship between traits associated with efficiency and GHG emissions is the logical next step for the breed and the industry.

By leveraging existing animal performance data and monitoring animal emissions, Stackhouse-Lawson explains the goal is to identify genetic traits that influence environmental emissions from individual animals and then develop selection indices that can be used to reduce the environmental impact of cattle, while maintaining, and ideally improving economic returns to producers.

“This project will also position the American Hereford Association as a sustainability leader in the beef industry through the development of genetic selection tools that can identify and inform breeders of genetics that meet climate goals without sacrificing quality, performance, and efficiency,” says Stackhouse-Lawson. Further, Enns notes the project has potential to pave new paths of revenue for cattle producers. These could include such things as verified sustainable production claims, in addition to commonly discussed carbon credits.

Ward emphasizes the U.S. beef cattle industry has a long history of demonstrating extraordinary gains in efficiency over time, using genetics, technology and management to produce more beef with fewer cows and less land. “We believe this research will help us identify ways to magnify the gains the industry has already achieved,” Ward says. “CSU is involved in this project because we are passionate about beef production and the beef industry, and the societal benefits it brings from the upcycling of human-inedible plant materials and byproducts into high-quality protein,” Enns says. “From a genetic improvement standpoint, CSU has a long history of new trait development and delivery of selection tools to the industry. As such, we feel we have much to contribute in this realm, striving to produce cattle that meet consumer demands, yet have a smaller environmental footprint.

“AHA is excited to work with CSU’s talented scientists and researchers that are part of the industry-leading AgNext team,” Ward says. AHA and CSU will host a free webinar July 12, which will summarize current understanding of the role U.S. beef cattle play in domestic and global greenhouse emissions. The webinar will provide more detail about specific beef cattle traits associated with GHG emissions, their heritability and potential use in selection tools to reduce the beef cattle industry’s carbon footprint.

*Demonstrating climate neutrality of U.S. beef production by 2040 is one of the industry sustainability goals developed by members of the National Cattlemen’s Beef Association.

Join us for the next Produce Safety Alliance Grower Training Course!