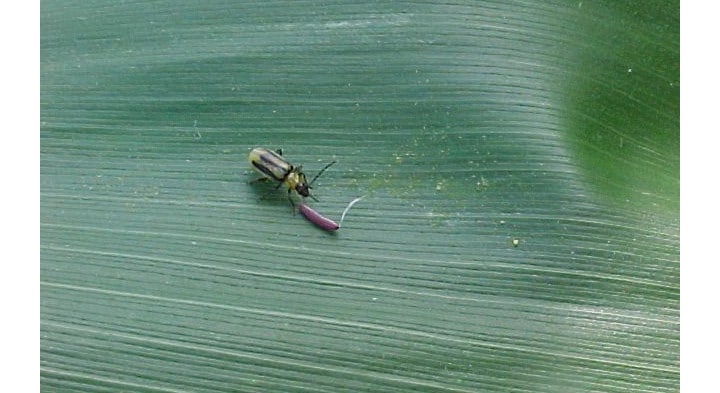 WESTFIELD, Ind. — Agronomists are concerned farmers in key producing areas of the Midwest could see an increase in corn rootworm pressure in 2022. Population densities have risen in recent years and a drier fall followed by a mild winter likely led to lower pest mortality, says Terry Mente, AgriGold agronomist in eastern/southeast Iowa.

Mente reminds farmers they can lose about 15% of their yield potential per ring of nodes that are pruned by rootworm in an average year. In a wet year, the impact may be less severe, but if conditions are dry or nutrients are marginal, losses could be amplified.

Kevin Gale, an agronomist with AgriGold in northern Illinois, has also seen rootworm populations increase. “It’s important to be cognizant of what’s needed rather than using a blanket approach for battling the pest, especially on ground that has been corn-on-corn for several years,” he says. “Switching up modes of action or including an insecticide may be warranted in some fields for maximum root protection.”

Identify if you have a problem

The first step is to assess your corn rootworm risk by scouting fields. Mente says field notes can be a powerful tool and observes big problems are usually proceeded by a “warning shot” like a patch of downed corn the year prior, generally following a wind event.

“Problems are often spotted during harvest when farmers are often too busy to stop work and do some digging,” says Mente. “But taking the time or reaching out to your agronomist before you forget where the spot is located can save you a lot in the long run.”

Two species of rootworms wreak the most havoc in the Midwest: Northern Corn Rootworm (NCR) and Western Corn Rootworm (WCR). “We like to use yellow non-baited sticky cards to identify what type and how much rootworm pressure a farmer is facing,” says Mente.

Larvae typically begin hatching and feeding on roots in late May or early June. That root pruning can hinder nutrient and water uptake, holding back yield potential and increasing the odds of standability issues. By late June/early July, adult beetles typically start to emerge and begin feeding on pollen and green silks. If silks aren’t available yet, WCR and NCR beetles will attack leaves.

Rootworm can be spotty within fields. Gale says rootworms like to lay eggs in moisture and adds that replanted fields, or areas of fields, are “prime candidates of where those rootworms are going to go because of later flowering or late silking.”

Trait selection is the first line of defense after determining corn rootworm is a threat. Mente recommends rotating below-ground trait protection modes of action. “What we don’t want to do is rely on any one single control,” says Mente. “AgriGold has multiple hybrids that incorporate pyramided Bt traits farmers can alternate into their rotation to protect yields against corn rootworm.”

Gale emphasizes rootworms will adapt to repetitive management tactics, especially in corn-on-corn environments. “If farmers grow the same technology year after year, the rootworm population will adapt and do more injury to the root,” he says. “Rotating modes of action is more effective.”

Timing of insecticides is important

Mente and Gale think it’s helpful if farmers have a basic understanding of the rootworm life cycle for timing insecticide application. The NCR and WCR have similar life cycles, with one generation per year. Larvae begin hatching in late May and early June, and adults typically begin emerging in late June/early July.

“The goal is to kill adults before they begin to lay eggs for the coming year,” says Mente. “One of the ways we can go after the adults is with a foliar insecticide, which often lines up with an application of a fungicide. Attacking the adult helps control populations moving forward.”

Crop rotation is another line of defense against corn rootworm

The pest’s ability to adapt to rootworm modes of action is “one of the reasons we talk at AgriGold about throwing a lot of different things at this pest to keep them on their toes,” says Mente. “Rotation to a non-host crop like soybeans is one of the most effective lines of defenses against the pest, but it’s not foolproof, and it’s not an option for everybody.”

“Crop rotation is the most effective management practice to controlling rootworm, however, growers must be aware of the potential for the Western Corn Rootworm variant laying eggs in soybean fields that can affect first year corn,” adds Gale. “Northern Corn Rootworm numbers have risen as well, whose eggs laid in corn fields can hatch after two winters (extended diapause), causing concern when corn is planted again.”

Volunteer corn in soybean fields can also enable rootworm to survive, reducing efficacy of crop rotation as a management practice. Weeds like waterhemp, along with volunteer corn, can act as a trap crop since beetles are attracted to pollen. Controlling these weeds is “imperative,” according to Gale.

Mente also emphasizes choosing a hybrid with a “more aggressive” root that regenerates after being damaged can more effectively pull in nutrients and stabilize the plant.

Both agronomists encourage farmers to work with their AgriGold agronomist to monitor corn rootworm population densities through the growing season and fine-tune management plans.