Home » Agrobiodiversity suffering around the globe 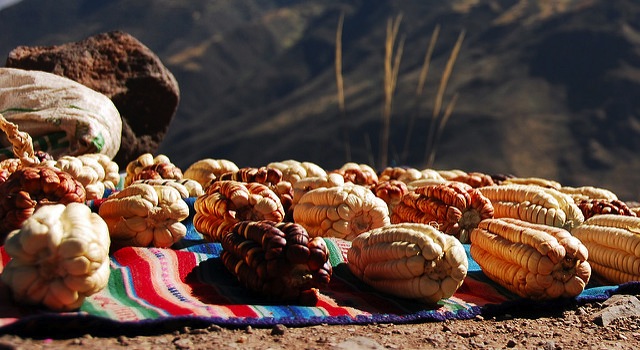 According to Bioversity International, an international research and policy organization, just three crops – rice, wheat and maize – provide more than half of plant-derived calories consumed worldwide. This is a problem because our diets are heavy in calories, sugar and saturated fat and low in fruits and vegetables. (Tinou Bao, Flickr/Creative Commons)

WASHINGTON — One day last March I talked with Juliana and Elisa, a mother and daughter who farmed just outside the city of Huánuco, Peru. Although they had only one acre of land in this mountainous landscape, they grew dozens of local varieties of potatoes and corn, along with other crops. And they knew each of their varieties by a common name – mostly in their Quechua language.

Potatoes are native to the Andes, and over 4,000 varieties are grown there now. They come in numerous shapes, sizes and colors – red, yellow, purple, striped and spotted. A colorful mound of them resembles the bold, burnished colors of locally woven shawls.

This wide array of types is an example of agrobiodiversity – a genetic legacy created by natural selection interacting with cultural practices over thousands of years. Today, however, agrobiodiversity is declining in many countries. In Mexico farmers are cultivating only 20 percent of the corn types that were grown there in 1930. Chinese farmers are producing only 10 percent of 10,000 varieties of wheat that were recorded there in 1949. More than 95 percent of known apple varieties that existed in the United States in 1900 are no longer cultivated.

According to Bioversity International, an international research and policy organization, just three crops – rice, wheat and maize – provide more than half of plant-derived calories consumed worldwide. This is a problem because our diets are heavy in calories, sugar and saturated fat and low in fruits and vegetables.

But there also are bright spots, such as Andean potatoes. In a recent article, Stef de Haan of theInternational Center for Tropical Agriculture and I call for a major effort to strengthen agrobiodiversity for the future. Consuming many different species and varieties provides a diet that offers many unique tastes and a wide selection of nutrients that humans need to thrive. It also can help ensure more stable food systems and the needed variety of desirable genetic traits, such as hardiness.

Generally, agrobiodiversity is significantly lower in wealthy nations, where the industrial food system pushes toward genetic uniformity. For example, federal agriculture policy in the United States tends to favor raising large crops of corn and soybeans, which are big business. Crop subsidies, federal renewable fuel targets and many other factors reinforce this focus on a few commodity crops.

In turn, this system drives production and consumption of inexpensive, low-quality food based on a simplified diet. The lack of diversity of fruit and vegetables in the American diet has contributed to anational public health crisis that is concentrated among socioeconomically disadvantaged groups. Low agrobiodiversity also makes U.S. agriculture more vulnerable to pests, diseases and climate change.

To connect these conditions to agrobiodiversity, consider potatoes. Although the United States has 10 times more people than Peru, only about 150 varietiesof potato are sold here. Six varieties account for three-quarters of our national potato harvest. They dominate because they produce high yields under optimal conditions and are easy to store, transport and process – especially into french fries and potato chips. Federal policies have helped these varieties become established by reducing the cost of irrigation.

Ironically, rich agrobiodiversity in many low- and medium-income nations supports more standardized and genetically uniform breeding industries in wealthy nations. U.S. and European scientists and seed companies have used the diversity of Andean potatoes and their relatives to create commercial varieties that are the roots of modern industrial agriculture.

How change can promote agrobiodiversity

To protect and increase agrobiodiversity, we have to know how to value it in a rapidly changing world. In the GeoSynthESES Lab that I lead at Penn State, we are developing an ambitious new framework to analyze whether and how agrobiodiversity can continue to be produced and consumed in the future.

Thanks to our fieldwork in Peru and other countries, we’re finding that certain global dynamics, such as urbanization and migration, can be compatible with agrobiodiversity production and consumption. For example, Elisa and Juliana live within a few miles of the Huánuco urban area, and they both work jobs in the city. Their “traditional” farming and eating patterns blend with their part-time farming.

Such changes can even support the innovative use of local food varieties, but only under the right conditions. Farmers must have sufficient land and water. They have to continue preferring these food flavors and tastes. Vibrant local markets for these foods make producing them economically viable.

Together with collaborators working in Huánuco, our lab is assessing ways in which global trends could undercut agrobiodiversity in Peru. One concern is local adoption of “improved varieties” of both potatoes and corn that are being created by national and international breeding programs and private seed companies.

Under favorable conditions, these types provide high yields and potentially good sales income. But the seeds can be expensive by local standards, and growing them requires more inputs, such as fungicides and irrigation. Farmers who use them are less resilient if it’s a bad growing year or if cash is low. For these reasons more than one-half of the potato and maize seed being grown by the Huánuco farmers still comes from local sources such as nearby markets, neighbors and family members.

So far, farmers in Huánuco and elsewhere in Peru prefer to growth both their traditional crops and new ones if possible. But discussions of new initiatives to extend the reach of such “improved varieties” reflect how these challenges will continue to evolve.

We also are analyzing local impacts of the global spread of inexpensive, low-quality industrial foods. Juliana, Elisa and their Huánuco neighbors increasingly depend on staples such as rice and sugar and on heavy use of cooking oil. Many of them still grow high-agrobiodiversity crops, but on a smaller scale, and these crops play a shrinking role in their diets. It is important to counter this trend by revaluing these nutritious foods, both for human health and for the environmental benefits that agrobiodiversity brings.

On the positive side, middle-class Peruvians are embracing agrobiodiverse foods sold through markets and food fairs, such as the huge annual Mistura food festival in Lima. Internationally renowned elite restaurants and celebrity chefs are potentially important, nontraditional allies. It is crucial to find ways in which Elisa, Juliana and other producers of agrobiodiverse foods can earn rewards from these new markets.

There also is growing interest in agrobiodiversity in the United States. Potato farmers here in central Pennsylvania and across the Northeast are reviving more than 100 local varieties that until recently had been considered lost. In the Southwest, research groups recently uncovered evidence of the ancient “Four Corners Potato,” the first known wild potato in North America, which was used some 10,000 years ago. DNA from this species could provide genes to make modern potato strains more resistant to drought and disease.

Global shifts of urbanization, migration, markets and climate can potentially be compatible with agrobiodiversity, but other powerful forces are undermining it. The imperatives of producing food at lower cost and higher yield clash with efforts to raise high-quality food and protect the environment. The future of agrobiodiversity hangs in the balance.

This article was originally published on The Conversation. Read the original article here:http://theconversation.com/fewer-crops-are-feeding-more-people-worldwide-and-thats-not-good-86105.

Bag of Hopes and Dreams…