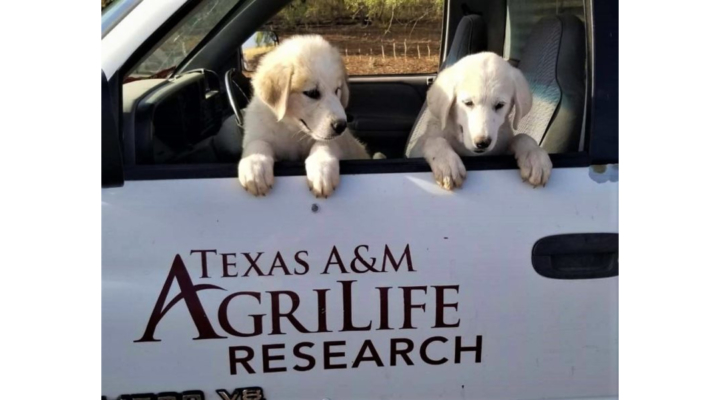 It might appear that Bill Costanzo, Texas A&M AgriLife Research livestock guardian dog specialist, is doing just that each day at the office. However, Costanzo is actually preparing puppies for futures protecting livestock– all while researching the factors that might contribute to that success.

The AgriLife Research Center in San Angelo is conducting a study on what types of bonding pen experiences produce a better livestock guardian dog, or LGD. Bonding pens are fenced pastures where dogs bond with the species of their future charges.

The current class of dogs are Moe, Larry, Curly, Thor, Goliath and Hulk. The puppies will spend approximately three months in the bonding pen process in San Angelo. Each bonding pen is an acre in size and, once the bonding process is complete, the dogs will graduate to much larger pastures where they will guard flocks or herds. They will continue to have their behavior monitored until they are approximately 18 months old.

These dogs serve as deterrents to predators such as coyotes, eagles, feral hogs and mountain lions– anything threatening goats, sheep and their young.

“Bonding of LGDs starts at birth with these animals,” said Costanzo. “ It is believed that if puppies are not properly bonded by 16 weeks of age, the imprinting in the dog’s brain to guard its charges is not firmly set.”

Improper imprinting could result in dogs who wander and do not stay with their charges. Costanzo thinks bonding from birth to 16 weeks of age is probably the single most important thing to do to establish a strong foundation for future success as a livestock guardian dog.

The class of six puppies are in four bonding pens at the AgriLife Research and Extension Center in San Angelo. The dogs are all male and come from two different litters of livestock guardian dogs with proven genetics. Three puppies are Maremma guardian dogs. The other trio is what’s known as a Texas LGD mix of Akbash, Anatolian Shepherd and Great Pyrenees bloodlines. Goliath hanging out with his herd. (AgriLife Research photo)

The other three puppies had already earned superhero monikers from their breeder, and Costanzo said the names seemed to fit, so he kept them.

“At the time, Goliath was the largest, and Hulk had the most muscle,” Costanzo said. “Thor still has a little potbelly, like his character in ‘Avengers End Game’, so it seems fitting.”

For this first study there are four bonding pens total, and Costanzo is studying whether these dogs will become better livestock guardian dogs when raised in bonding pens with a sibling or solo. Each trio of brothers is divided up so that one dog is alone in a pen while his two siblings are together in a different bonding pen. Costanzo is also studying whether anti-digging deterrents actually prevent dogs from getting out of fenced areas later in life.

These dogs are not pets, but they are cared for and trained for real-world situations. They are walked on leashes a few times a week, groomed and ride in vehicles so they become comfortable traveling between different locations or going to the vet.

“These are dogs that instinctively want to protect, so they need to be bonded to sheep and goats so that natural instinct to guard is focused on the animals, rather than on humans,” said Costanzo. The puppies are exposed to both sheep and goats since their future duties could involve protecting both types of animals.

“LGDs can be bonded to almost any species,” Costanzo said. “They also do a great job when bonded to poultry. Free-range poultry operations in California are using dogs to guard against predators.”

Most likely the puppies will guard the flocks and herds belonging to AgriLife Research upon graduation. The plan is for two to remain in San Angelo, two will work in Menard at the Martin Research Ranch, and two will be at the Sonora Station. The siblings that were in bonding pens together will remain in pairs working together to quantify the impact of bonding with another guardian dog.

“There is debate within the LGD breeding community regarding how much interaction with humans is ideal,” said Reid Redden, Ph.D., AgriLife Extension sheep and goat specialist, San Angelo. “Some people prefer that LGD have no interaction with humans. These dogs often become fearful of humans and are difficult to manage.

“Other people prefer that LGD have daily contact with humans. These dogs could bond with people too much and not stay with their livestock. Through this project and future efforts, we aim to build a data set of rearing LGDs with an array of bonding experiences and document the LGDs effectiveness at guarding livestock.”

You can see the puppies’ progress on the LGD Facebook page. On the AgriLife Research and Extension website, you can learn more about the dogs and read Costanzo’s blog.

Informing the public on the cycles of cattle production, grazing & economics
November 17, 2021