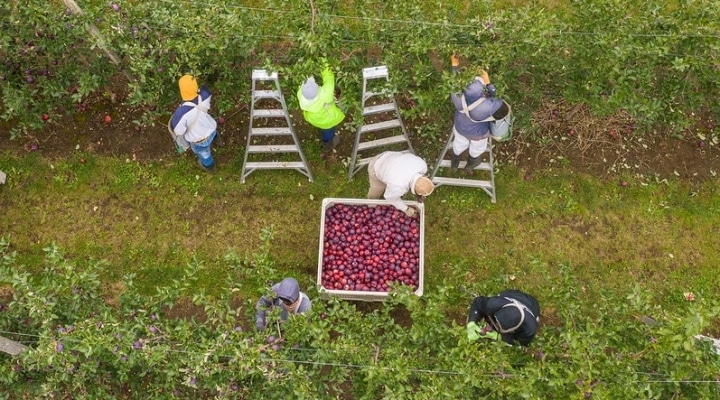 “Workers are even afraid to come get tested,” said Baldemar Velazquez, president of the Farm Labor Organizing Committee in Ohio. “They feel that if they get tested, they get any symptoms they’re going to lose work, they’re not going to get paid and they can’t feed their family.” (Stock photo via U.S. Department of Agriculture, Public Domain)

CHAMPAIGN, Ill. (AP) — Pedro Cabrera Flores, 70, had spent the past eight summers packing green beans into cans in Gillett, Wisconsin. In order to be hired again, he had to complete the season, but, in August, he decided to quit his job because he felt unsafe, he said.

New workers were not being tested for the coronavirus, he said.

“They were not told to quarantine,” Cabrera Flores said. “They just arrived and after two days they started working, and these people were coming from places where the pandemic is still active at large.”

His employer, Seneca Foods, did not return multiple requests for comment.

While some people work from home during the COVID-19 pandemic, agricultural workers pick and pack the fruits and vegetables Americans rely on. They do so in potentially dangerous conditions — they often live in cramped housing, ride in crowded buses to job sites and work close to others — and without the federal government guaranteeing coronavirus protections.

States such as Virginia, Oregon and Washington have created their own enforceable rules to control, prevent and mitigate the spread of the virus among farmworkers. But federal mandates are necessary to ensure that employers are doing enough to protect workers, advocates said.

“I really believe that the agencies, state and federal, who are in charge with regulating the agricultural industry need to be looking at binding requirements to address COVID-19,” said Daniela Dwyer, a Texas RioGrande Legal Aid attorney who has spent years working with the state’s migrant labor population.

The Occupational Safety and Health Administration does not keep track of complaints involving agricultural workers, which are primarily migrant workers who travel within the U.S. to job sites and people on temporary work, or H-2A, visas.

But the agency has tracked complaints involving farm labor contractors, which hire these kinds of workers and transport them to job sites.

As of Sept. 6, OSHA has closed nine complaints about COVID-19 that involve farm labor contractors.

Twelve complaints about farm labor contractors remain open. There have also been two COVID-19 complaints related to migrant camps, where some workers live; one has been closed.

Similar to meatpacking plants, which federal data shows that about half the COVID-19 cases are among Hispanics, the situation has hit Latinos particularly hard because they make up the majority of agricultural workers.

As of 2018, more than 60% of farm laborers, graders and sorters were Latinos, according to the U.S. Department of Agriculture. And about three-quarters of about 3 million agricultural workers were foreign born, mostly from Mexico, according to the National Center for Farmworker Health.

“It’s highly disproportionate, and from my perspective, a direct assault on so many ‘Mexicanos and Mexicanas’ (Mexicans) working as essential workers and not being adequately protected in places of employment,” said Erik Nicholson, former national vice president for United Farm Workers, a California-based union.

At least 16 farmworkers have died from the coronavirus, according to tracking from the Food and Environmental Reporting Network. There could be many more, advocates said.

The Mexican Ministry of Foreign Affairs tallies how many Mexican nationals have died from COVID-19 in the U.S. — as of Sept. 14, it was nearly 2,400 — but it doesn’t include job descriptions for the people who died.

When Cabrera Flores arrived on June 3 at his job site in Gillett from his home in Texas, he had to wait two weeks before working, he said. He was also tested for the virus.

“So far, everything was going well,” he said. “We started working as usual, but some time after we started, the problems began.”

That’s when new workers weren’t being tested, he said. They came from Laredo, Texas, which has a large outbreak, and two Mexican cities in the state of Nuevo Leon, which has one of the biggest outbreaks in the country, according to data from the Mexican federal government.

In Wisconsin, the federal OSHA regulates agricultural jobs like Cabrera Flores’. The state doesn’t oversee workers’ employers to ensure testing is being done, said Tyler Tichenor, a spokesman for the state’s Department of Workforce Development.

The agency “has no guidelines or rules to protect farmers or any other workers from contracting COVID-19,” he said.

Since Cabrera Flores stopped working in Gillett, some workers have told him that the company resumed testing. Still, despite taking a financial hit and losing the ability to return next year, Cabrera Flores was so scared he left his job.

He said that other workers did not follow him in quitting because they fear that they will not be able to find another job in the future.

In early July, Marco Antonio Galvan Gomez, 49, arrived in Texas from central Mexico on an H-2A visa, allowing him to work in the U.S. for a set period of time. He worked near Dalhart, in northern Texas, for Blaine Larsen Farms, a potato grower with facilities in three states that employs hundreds of H-2A workers.

In a complaint to OSHA about Blaine Larsen Farms, the legal aid office wrote that workers were not adequately protected.

“It is our understanding that workers are being housed in congregate housing, with insufficient COVID-19 prevention measures, as well as such measures not being taken at the worksite,” the complaint reads.

Blaine Larsen Farms did not return multiple requests for comment.

“The two farms do business together and some family members of those who manage at Larsen Farms are employed at CSS Farms so there are business and social connections between the two,” she said.

But Widdowson said at least several employees have tested positive for the virus.

“Since the beginning of the global pandemic, five employees at our Dalhart farm have reported (sporadically over that six month period) that they had contracted Covid19,” she said in an emailed statement. “They were instructed to follow government quarantine protocols and not to return to work until cleared. Fortunately, all have recovered.”

“As always, CSS Farms will cooperate and comply with any regulatory audits to ensure the continued safety, health and welfare of our valued employees,” Widdowson said.

Texas has not issued binding rules for employers of migrant and H-2A workers, and the state has long failed to protect farmworkers, according to a 2016 Austin American-Statesman investigation.

While OSHA has opened investigations in Texas, Dwyer said she believes some complaints have not garnered the attention they deserve.

“Not all of them have resulted in in-person investigation,” she said. “The primary reason that OSHA does in-person inspections is because one shouldn’t rely exclusively on what an employer is saying that they’re doing.”

OSHA “will take the steps needed to address unsafe workplaces, including enforcement action, as warranted,” the agency spokesperson said.

During the COVID-19 pandemic, OSHA has had its fewest number of safety inspectors since the 1970s, according to the National Employment Law Project. In June, an agency spokesperson said the agency was “actively recruiting” inspectors.

In southern Illinois, several orchards bring in farmworkers each year for the harvest, but there has not been widespread testing among workers there, said Karla Grathler, the farmworker health coordinator at Shawnee Health Service based in Carterville, Illinois.

Instead, employers in the area were getting tests for workers who were already symptomatic, she said.

The lack of widespread testing could contribute to not having a full picture of how many farmworkers have been affected by the coronavirus, advocates said.

Dwyer, from Texas RioGrande Legal Aid, said that mass workplace testing, which some meatpacking plants have done, is necessary for accurately tracing and preventing the spread of the virus among farmworkers.

Coronavirus cases have also gone under-reported in agriculture because of the lack of healthcare access and the fear of deportation or retaliation from employers, she said.

“There could be many, many people who are sick,” she said, adding that the worker population is so underground without connections in the community where they work that “they might not be able to access care to know that they’re sick.”

Because of that, authorities may never know if they tested positive or died, she said.

“Workers are even afraid to come get tested,” he said. “They feel that if they get tested, they get any symptoms they’re going to lose work, they’re not going to get paid and they can’t feed their family.”

Nicholson said that his union struggled to document the spread of the virus due to stigma among workers about being infected.

“The problem we have is that for many workers catching the virus is something that ‘da verguenza’ (they’re ashamed of), and people don’t talk about it, and they lay low,” he said.

Nicholson pointed to the family of a Mexican man who died in June from COVID-19 as a potential example.

For many Mexicans in the United States, being buried in their home communities in Mexico has a special ceremonial significance. But, because of the disease, the man’s family was not able to repatriate his body and bury him in Oaxaca. Instead, they had to cremate the remains, which was against their beliefs, Nicholson said.

“Had the family simply said, ‘No, se nos murió alguien’ (somebody in the family died, without mentioning the virus), they would have been able to bury their ‘ser querido’ (loved one) in Oaxaca,” he said.

–By FRANK HERNANDEZ of Midwest Center for Investigative Reporting

For more articles on coronavirus and agriculture, click here.