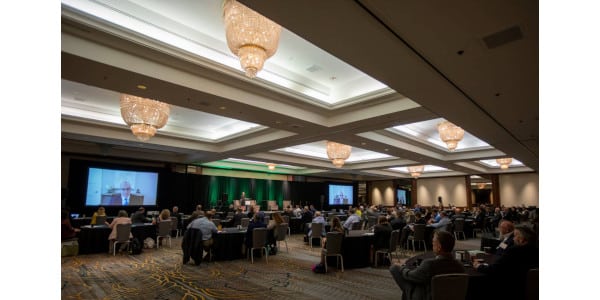 The Ag Outlook Forum was held in Kansas City on Monday, September 20. (Courtesy of Agricultural Business Council of Kansas City)

KANSAS CITY, Mo. — At the UN’s Food Systems Summit next week, the United States will be advancing a new coalition to help elevate sustainable productivity growth as a strategic action priority, said USDA Secretary Tom Vilsack. He was speaking at the annual Ag Outlook Forum in Kansas City, Monday, September 20, presented by the Agricultural Business Council of Kansas City and Washington, D.C.-based Agri-Pulse Communications. “We can’t let our European friends have just one strategy,” Sec. Vilsack pointed out.

USDA maintains that countries together must get behind action for productivity growth that advances social, economic, and environmental objectives. A new Coalition of Action for Sustainable Productivity Growth for Food Security and Resource Conservation is one way to do that. “It’s not a simple thing,” Vilsack noted, adding that the U.S. “must have a leadership position.” Among other remarks, Sec. Vilsack said agriculture exports to China were running at a record pace, not seen since 2014. Experts are forecasting record trade activity for 2022 – even though China has not met all of its commitments in the 2020 China Phase One Trade Agreement.

U.S. Senator Jerry Moran opened the Forum stressing that ag matters, and asked attendees to think about how different the country would be without the Heartland and Midwest to keep coastal cultures and attitudes on an even keel. He expressed some dismay that ample grain and foodstuff that “a hungry world could use” remains stockpiled.  He also noted that while most of the news focuses on staff vacancies at Kansas City-based ERS and NIFA, the two USDA agencies continue to allocate millions of dollars for research and development in animal health and agricultural science.

Tim Bettington, Zoetis’ executive vice president and president of U.S. Operations and Global Customer Experience, said when NBAF in Manhattan, Kansas, is certified and up and running its impact will extend far beyond the local economy – though it should be a $3.5 billion boost. NBAF’s capabilities will expand. People tend to key on diseases like African Swine Fever and Hoof & Mouth, he noted. “But there are more than 200 known types of zoonoses; this is a huge step forward.”

Bettington offered numerous observations about agriculture going forward. Methane emission is the next wave of livestock innovation and technology will contribute to reductions – not herd reduction or change in meat consumption habits. Feed innovation will contribute to gut health and less methane emission. Companies will partner with each other and collaborate with universities. As for plant-based food, Bettington commented that while distributors and retail food outlets said new introductions of such products draw interest, re-order rates are low.

Luncheon speaker Ben Fargher, managing director, sustainability for Cargill Agricultural Supply Chain North America, said more people outside the ag industry are beginning to acknowledge that agriculture is part of the solution to developing sustainable systems for farming and raising livestock. “All sectors of agriculture are where the action is.”

Sara Wyant, founder and editor-in-chief, Agri-Pulse Communications, moderated a panel of ag industry economists who offered insights on the agriculture economy going into the next couple of years.

Soy oil demand is strong, spurred by California’s low-carbon fuel standard, Seth Meyer, chief economist, USDA, said. But that demand is causing problems for food companies that depend on vegetable oils. “Renewable diesel plants are being built by big petroleum companies who will put those plants, if not inside the gate of the refinery, next to the refinery,” Meyer said. Scott Gerlt, economist, American Soybean Association, said demand for renewable diesel will continue to grow but won’t meet the 7 billion gallons of production capacity that had been anticipated, which is more than California needs.

Jackson Takach, chief economist at Farmer Mac, talked about interest rates “which are the lowest in history” and farm real estate “which is a hot commodity.” He noted that the financial outlook for farmers could be stabilizing as low interest rates help those who have to make capital expenditures. Takach also pointed out that “inflation is still hanging around.” And what the Fed “is going to do” remains to be seen.

Long-time director and former officer of the Missouri Farm Bureau Blake Hurst moderated a panel discussing new markets. Tim Lust, CEO, National Sorghum Producers, described the sorghum business as one that nobody knew about, and nobody cared about. But demand from aviation fuel makers and alcohol beverage distillers has boosted the fortunes of the crop. “Exports are the elephant in the room,” he said. “Biofuels have been our staple.” China has already bought 26% of the crop to produce baijiu, a cultural drink made with alcohol infused with herbs, spices, fruits, and other ingredients.

Rick McNary, founder of Shop Kansas Farms, described a new kind of “food insecurity” – people who had the money to buy food, but couldn’t find it during the pandemic. He has created a rural grocery initiative that encourages farmers to market their meats online. Laura Wood Peterson, principal, LWP Consulting, provided an overview for how farmers can improve profitability as they participate in new carbon markets and adopt more sustainable practices.