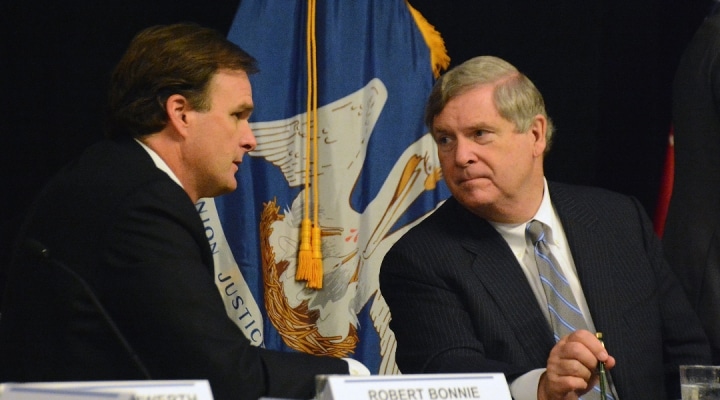 WASHINGTON — “I am grateful to President Biden for announcing his intent to nominate Robert Bonnie to serve as Under Secretary for Farm Production and Conservation with the Department of Agriculture. Robert currently serves as Deputy Chief of Staff and Senior Advisor for Climate at USDA. He led the USDA Transition Team for the President-Elect and Vice President-Elect. And he served in the Obama-Biden Administration as Under Secretary for Natural Resources and Environment as well as my Senior Advisor for the Environment and Climate. He is one of the nation’s foremost authorities and leaders on working lands approaches to conservation and incentive-based climate and conservation practices for farmers, ranchers, foresters and landowners. Under Robert’s steady hand, America’s farmers, ranchers, producers and landowners will see renewed focus on building and maintaining markets at home and abroad and preparing our food and agricultural community to lead the world in climate-smart agricultural practices. Robert will be committed to working with U.S. farmers and landowners to help feed Americans and the world and make climate smart practices work for them in a market-oriented way—a way that creates new streams of income, a cleaner energy future and a biobased manufacturing revolution.”

Prior to joining USDA, Bonnie was at Duke University, first as a Rubenstein Fellow and later as an Executive in Residence at the Nicholas Institute for Environmental Policy Solutions working on conservation and environmental issues in rural America. In 2020, he also worked with the Bipartisan Policy Center on its Farm and Forest Carbon Solutions Initiative.

Previously, Bonnie was vice president for land conservation for the Environmental Defense Fund where he focused on developing incentives to reward farmers, ranchers and forest owners for stewardship activities on private lands. At EDF, he helped develop the Safe Harbor program and other incentive-based approaches to endangered species conservation. Bonnie has master’s degrees in forestry and environmental management from Duke University. He grew up on a farm in Kentucky and now lives in Virginia.

To view President Biden’s announcement on his intent to nominate Robert Bonnie as Under Secretary for Farm Production and Conservation at USDA, you may read President Biden Announces His Intent to Nominate Eight Key Administration Leaders.