Home » Agriculture on the upswing in San Mateo County 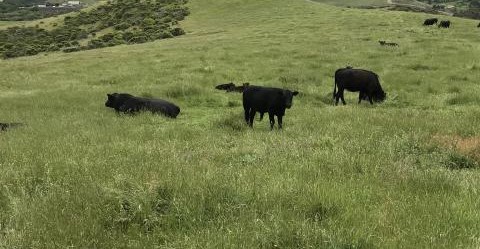 Cattle and calves fared well, with a 1,574 sold headcount valued at $2.5 million — a 29 percent increase for the livestock group. (Courtesy Photo)

SAN MATEO CO., Calif. — For a second consecutive year, San Mateo County gross agricultural values showed an uptick over the previous year, with a $6.1 million increase in indoor floral and nursery crops and more than $2 million gain in vegetable crops, according to the 2017 Agricultural Crop Report.

The 2017 overall production value of $142.7 million does not account for costs associated with labor, field preparation, planting, harvest and distribution, said Agricultural Commissioner Fred Crowder, who will present the annual report to the Board of Supervisors at its July 24 meeting.

In the report’s cover letter, Crowder highlights the commodities whose values showed significant changes between 2016 and 2017. Indoor potted plants increased $3.6 million while Brussels sprouts and pumpkins contributed to the $2.2 million increase in vegetable crop values.

“It’s important to remember that life in San Mateo County is as much about agriculture as it is about technology. You can’t eat your mobile device but, thankfully, it can help you find a farmers market. Agriculture and its crops are important to our health and well-being. We need to thank the men and women who contribute to its vitality and bring fruits and vegetables to our table,” Crowder said.

Outside of the usual suspects like Brussels sprouts — perennially the county’s top vegetable crop — other industries proved bright spots, too. San Mateo County is a challenging landscape for grape production but better weather improved wine grape values from $703,000 to $1.2 million. Cattle and calves also fared well, with a 1,574 sold headcount valued at $2.5 million — a 29 percent increase for the livestock group.

Not all groups posted improvements. Outdoor floral and nursery crops dropped $1.3 million to a group value of $20.1 million and forest products declined 20 percent to $3.7 million.  These commodities were significantly up in the previous report and largely contributed to the higher overall values.  Commercial fish catch values are also down to 8.9 million pounds landed with a value of $11.2 million.  The lower fish catch was largely because elevated levels of domoic acid shortened the Dungeness crab season, and there was a significant drop in the pounds of squid landed. Although commercial fish catch data is included in the Annual Crop Report, the value is not included in the figures for overall agricultural production.

Despite some specific categorical decreases, the overall numbers are stronger than the span of 2014 and 2015 when local agriculture values dropped $19.7 million due to a mix of factors including a shortage of migrant farm labor which in turn led to substantial cutbacks in floral and nursery production.

For example, acreage for Brussels sprouts and pumpkins is down almost 20 percent. However, higher per unit values for premium, fresh market crops plus direct-to-customer sales at agricultural tourism events contributed to higher returns.  These types of adjustments are key if farmers are to continue growing, as the environment for farming has never been more challenging, Crowder said.

Current and past crop reports are available at http://agwm.smcgov.org/agricultural-crop-report