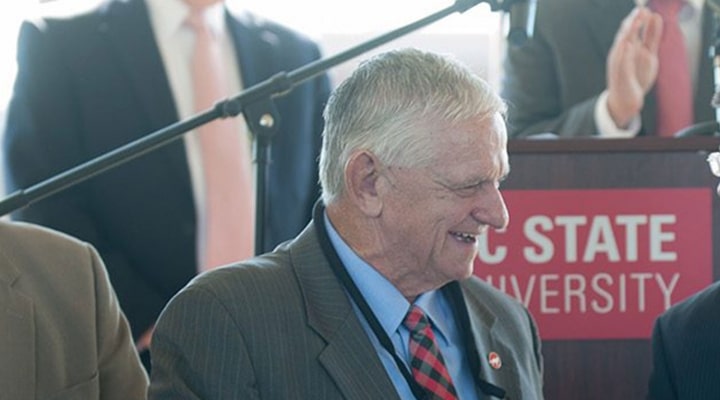 Dan Weathington, a longtime friend of NC State’s College of Agriculture and Life Sciences and supporter and advocate for the North Carolina Plant Sciences Initiative, has passed away. Weathington died Monday, Aug. 3, surrounded by family and friends. (photo by N.C. State university)

RALEIGH, N.C. — Dan Weathington, a longtime friend of NC State’s College of Agriculture and Life Sciences and supporter and advocate for the North Carolina Plant Sciences Initiative, has passed away. Weathington died Monday, Aug. 3, surrounded by family and friends.

“Dan was an incredible ambassador and advocate for North Carolina Agriculture and made North Carolina a better place to work,” said CALS Dean Richard Linton. “He also provided the catalyst needed for the vision and funding the N.C. Plant Sciences Initiative. Without Dan, there would be no N.C. PSI. He will be missed dearly but remembered always.”

Steve Lommel, NCARS director and CALS associate dean for research, agreed that Weathingon should receive a lot of credit for making the N.C. PSI a reality.

“Dan was the number one supporter,” Lommel said. “From the very first moment he heard of the idea, he was behind it 100%.”

At the start of the project, Weathington was the executive director of the North Carolina Small Grain Growers Association.

“The North Carolina Small Grain Growers Association came in with an early leadership pledge for the N.C. PSI. This helped stimulate overwhelming support from 45 other commodity groups,” Lommel said.

To many who knew or worked with Weathington, he was a dear friend.

“Dan was a beloved friend, leader, and advocate for agriculture. He was passionate and dedicated to the ag industry, especially farmers; he loved people and people loved him,” said Nikki Johnson, current executive director of the N.C. Small Grain Growers Association.

Throughout his career, Weathington was recognized for his dedication to and passion for the agriculture industry. He received several awards, including the North Carolina FFA Lifetime Achievement Award.

Weathington’s journey with FFA and agriculture education began in 1962 as a freshman at Stedman High School. As a high school FFA member, he competed in many competitions. He served as state FFA vice president in 1966. In the years to follow, Weathington continued to support FFA on a local and state level, and he joined the N.C. FFA Foundation Advisory Board in 2016.

“Dan’s hard work will forever be remembered and have a lasting impact on our state,” said Johnson.

To honor Weathington, the family is asking memorial contributions be made to Camp Monroe in Laurel Hill, North Carolina.