Subscribe
Home / Texas / Agriculture is no stranger to technology 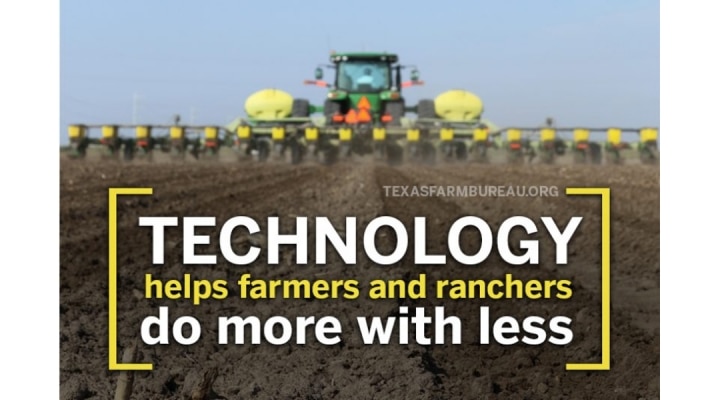 The technological advancements over the past several years have helped make farming and ranching even more sustainable. (Courtesy Photo)

WACO, Texas — When it comes to farming and ranching, many people often envision overall-clad men with a reluctance to embrace technology, content to be left alone in the countryside with their livestock and old machinery.

But that stereotype couldn’t be further from the truth.

Farmers are well-educated, experienced and technologically-savvy.

The technological advancements over the past several years have helped make farming and ranching even more sustainable.

Hydrology, engineering, technical and mechanical design and more are at the heart of everyday activities on farms and ranches across the nation.

And today, farmers grow even more while using less.

Thanks in large part to Dr. Norman Borlaug, agriculture entered a “Green Revolution” in the mid-20th Century.

From carrying buckets of water and flood-row irrigation to micro-drip and subground techniques, farmers have made big strides in getting water to crops, while using less overall and losing less to evaporation.

In Texas, statewide agricultural irrigation rates have stayed relatively the same since the mid-1970s, according to a report from Texas A&M University’s Texas Water Resources Institute. Over the same period, agricultural yields have increased exponentially. The same study showed that per-acre corn yields increased 62 percent since 1975, and cotton yields more than doubled during that time.

After all, farmers can’t grow crops without water. And without crops, they’re out of business, and we’re out of food.

Advancements have been made in soil health, erosion prevention, native plant restoration and a slew of other areas, too.

Precision agriculture is the newest frontier in agricultural technology. GPS-enabled equipment and drones bring electronic data collection to fields and pastures across the nation.

Preliminary results show even more efficiencies, but we’ve only uncovered the tip of the iceberg in terms of ways electronic data collection and analysis in agriculture can be used to help farms and ranches.

Farmers and ranchers care about their land. The land is their heritage, their pride and their livelihood, all rolled into one. They embrace technology to help them grow our food, fiber and fuel, making modern agriculture more efficient than ever before.

So, the next time you think about technology, think about farmers and ranchers. They will continue to adopt new tech trends to drive modern agriculture forward.