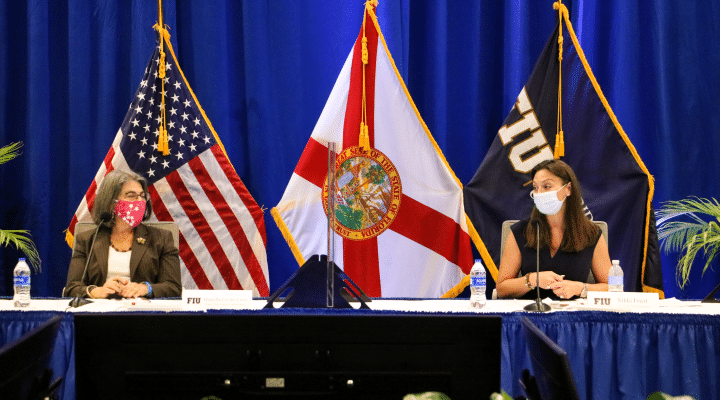 “COVID-19 has upended our lives, and exposed many contradictions and weaknesses in our communities. Our state is one of America’s top producers of farm-fresh food, yet we have three million Floridians struggling with food insecurity made worse by COVID-19. South Florida’s farmers provide 150 million Americans with fresh produce, yet are facing half a billion dollars in losses since March, compounded by billions in losses over two decades due to unfair trade,” said Agriculture Commissioner Fried. “When this pandemic began, we took action immediately to support our farmers, growers, families, and children impacted by our state’s food crisis. And as the pandemic continues, we are more committed than ever to working with partners at federal, state, and local levels, and the private and non-profit sectors, to overcome these challenges with innovation, collaboration, and empathy.”

“Right here in South Florida, the heart of agricultural production for our state, we’re ranked the worst metro area for food insecurity in the country. We see hundreds of cars lined up at weekly food distributions in Miami-Dade and families forced to make impossible choices between paying for food and paying other bills. Now more than ever, we need collaboration at all levels of government and nonprofit and structural solutions to tackle our food insecurity crisis,” said Commissioner Levine Cava. When the pandemic began six months ago, and the shutdown of our tourism economy left tons of crops unharvested, I worked with our local growers to create an emergency crop recovery program and connect millions of pounds of excess produce with those in greatest need. And I passed legislation to create a program to provide grocery gift cards to low-income residents through federal CARES Act funding. Working together with organizations like Farm Share, Feeding South Florida, our hard-working farmers, and many community partners, I believe that we can turn this moment of great need into new solutions to address America’s longstanding hunger crisis.”

“When we started this fiscal year and looked at the numbers, we found that just in Miami-Dade County, almost 300,000 individuals struggled with food insecurity – as we moved into the pandemic, that number easily tripled,” said Paco Velez of Feeding South Florida. “You can see it in the lines at the food distributions. So at Feeding South Florida, we’ve distributed 32 million pounds of food in Miami-Dade since the pandemic hit. It’s about access, and we want families to know where to go to get food.”

“We’re farmers from Palm Beach, Martin, and Miami-Dade Counties, and we’ve been able to rescue those products that would have been plowed into the ground, and get those out to the people that need it. But we’ve also seen a lot of other issues, as far as distribution and food storage, and multiple levels that need to be looked at,” said Justin Dunlap of United Farmers Alliance. “Food distribution is one of the biggest issues, as well as cold storage for our produce. Most of the donation groups that are smaller don’t have the capacity to store their products, so a solution we’re working to come up with is mobile storage, such as refrigerated shipping containers.”

Background: Florida is one of America’s top producers of farm-fresh food, yet 3 million Floridians struggle with food insecurity, including 850,000 children. Due to COVID-19 shutdowns of traditional foodservice markets such as theme parks, cruise lines, schools, and hospitality, Florida’s seasonal produce growers have faced $522 million in pandemic-related losses. These produce growers, largely based in South Florida, provide 150 million Americans with fresh fruit and vegetables, yet have lost $3.7 billion since 2000 due to unfair foreign trade. Food insecurity has worsened in Florida due to COVID-19’s economic effects, which has left 1.4 million Floridians unemployed. Many Florida children rely on school meals, yet due to school closures, Florida school lunch providers have lost $262 million in the 2019-20 school year, and face up to another $370 million in losses this year.

About Commissioner Fried: Florida Commissioner of Agriculture Nikki Fried is a statewide, independently-elected member of the Florida Cabinet, and leads the Florida Department of Agriculture and Consumer Services. Since taking office in 2019, Commissioner Fried has been a consistent advocate for Florida’s $137 billion agriculture industry and 2 million farmers, ranchers, farmworkers, and producers. Fried’s department also oversees Florida’s $1.3 billion school lunch program, serving 287 million meals to 2.9 million children last year, as well as the Summer BreakSpot program, serving nearly 14 million meals at more than 4,000 locations while schools are closed. During COVID-19, Commissioner Fried has been at the forefront of Florida’s response to the pandemic. With agriculture producers facing major losses due to COVID-19, Fried launched an online commodities exchange to connect farmers with consumers, food banks, and buyers, and developed alternative markets for Florida-grown products, such as state agencies. With schools closed due to COVID-19, Fried quickly approved more than 3,700 feeding locations, serving 59 million meals to children through June, and launched a $100,000 Walmart Foundation grant program to fight rural food insecurity. Prior to her election, Commissioner Fried served as an advocate for at-risk children, schools, and patient access to medical marijuana.

About Commissioner Levine Cava: Commissioner Daniella Levine Cava is proud to serve as the Miami-Dade County Commissioner for District 8. Since her election in 2014, Commissioner Levine Cava has focused on delivering for South Dade by fighting for a fair share of County resources; expanding economic opportunity and advocating for Miami-Dade’s farming community; pushing for transit improvements and better planning, and hosting the annual South Dade Solutions Summit. To date, she has secured over $30 million in funds for infrastructure projects in South Dade, and has proudly fought for much-needed resources to support the agricultural community throughout the coronavirus crisis. Commissioner Levine Cava came to elected office after having served as an advocate for South Florida families for over 30 years. She served special needs children and immigrants at Legal Services of Greater Miami, represented children in the child welfare system as Associate and Legal Director for the Guardian Ad Litem Program, and founded Catalyst Miami which helps low- and middle-income families build prosperity through education and advocacy.