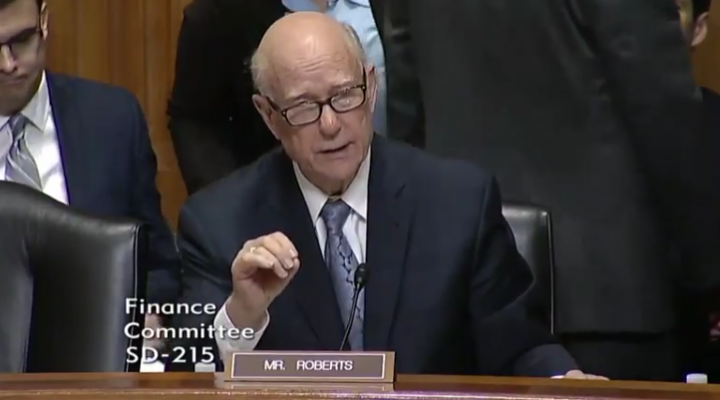 WASHINGTON — At a hearing of the U.S. Senate Committee on Finance with U.S. Trade Representative Robert Lighthizer, U.S. Senator Pat Roberts (R-Kan.) said the agriculture economy would not improve without a determined effort on trade.

“The work Ambassador Lighthizer has done in the past two months has made it clear he is the administration’s leader on trade,” Roberts said. “I want to thank him for spreading the message and educating his colleagues and international counterparts about the importance of agriculture trade. I was pleased to hear that U.S. beef is headed for China thanks to the progress made in the 100-Day Action Plan of the U.S. – China Comprehensive Economic Dialogue.”

Roberts went on to say, “I spoke at the 2017 Agriculture Symposium held by the Federal Reserve Bank of Kansas City. We discussed the severity of the current state of the ag economy. It is clear we are in the middle of a rough patch and the outlook will not improve unless we have a determined effort on trade.”

Senator Roberts, who serves as Chairman of the Senate Committee on Agriculture, Nutrition and Forestry, discussed with Ambassador Lighthizer the progress with Asia-Pacific countries on exports of agriculture products. He also spoke about the Ambassador’s plan for modernizing and strengthening NAFTA, while ensuring no harm to market access for U.S. agriculture.

Concluding his questions, Senator Roberts asked about the slow pace of China’s approvals of agriculture exports and how the Ambassador plans to continue to make it a priority.